The thing about having a squad no one tell you, if things go South your past record is going to bite you in the a**. Apparently, that’s pretty common in the YouTube community. And it is also something that never gets old. Recently, David Dobrik and his Vlog Squad are under fire after r*pe allegations against an ex-member Durte Dom (Dominykas Zeglaitis) surfaced. While David Dobrik still has his vlogs featuring Durte Dom on YouTube, Jeff Wittek has apparently deleted the main vlog featuring him.

Inside The Mind Of Durte Dom | deleted by Jeff Wittek

Trisha Paytas, Jason Nash’s ex-girlfriend who was featured in a lot of vlogs back then, confirmed to Insider that it was Jeff Wittek who went out to get liquor for the girls. However, by the time he came back, Trisha had already left with her then-boyfriend Jason Nash. Jeff, in response, denied the allegations. He also confirmed that he had the impression that things happening inside that room were consensual.

Related: Vlog Squad’s Jeff Wittek denies involvement in Durte Dom sexual assault case
He also posted a thread of tweets to clear out his side. 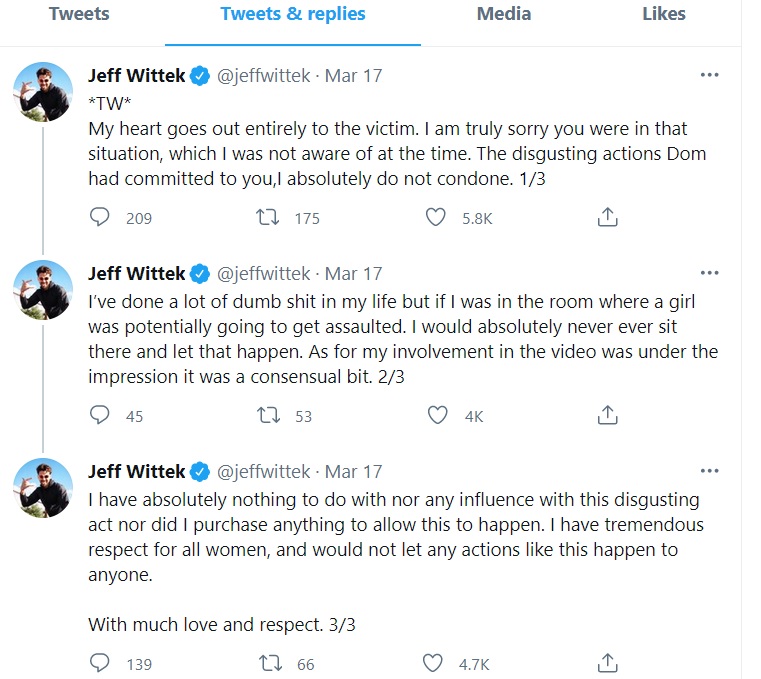 Now, many people on the internet started realizing that Jeff Wittek has deleted (or marked private) his Barbershop vlog featuring Durte Dom. The video was titled Inside The Mind of Durte Dom. It was recorded before the incident and posted on YouTube on October 31, 2018. However, it’s gone now. And I am a witness myself since I saw that video on his channel a couple of days back. Now, the same vlog has been re-uploaded by a YouTube account titled Trishageddon.

Some believe that the deleted vlog has homophobic, sexist, and racist comments.

The thing about Jeff Wittek “deleting” his vlog is still controversial since Social Blade is not showing negative views yet. This means that most possibly, he has marked the video as private.

On the contrary, seems like Durte Dom has deleted videos from his channel since his scores are showing negative views.

It is still unclear which of his videos have been deleted by Durte Dom. While we figure that out, do you think this is the end of the very famous Vlog squad? Let us know your thoughts in the comments below.

If you are a survivor of sexual assault, you can call the National Sexual Assault Hotline at 800.656.HOPE (4673) or visit their website to receive confidential support.
David DobrikDurte DomJeff WittekTrisha PaytasVlog Squad
0 1,407
Share
Subscribe to our newsletter
Sign up here to get the latest news, updates and special offers delivered directly to your inbox.
You can unsubscribe at any time