Have you ever watched a video on YouTube and just wanted to gauge your eyes out in a violent way? Well, I just did and I am unable to understand how can this person be posting such content and still has a subscribers’ count of 5.6 million approximately. Oh, and that’s not all, the content is so sickening that the majority of the people on the internet (including me) are asking the same questions: (A) why YouTube has not banned his content yet? (B) why this “YouTuber” still has monetized videos on YouTube? I’m talking about IMJayStation and his viral racist-slavery video. If you have not watched it yet, please don’t.

IMJayStation, Jason Ethier, is a pretty controversial YouTuber. In order to find a niche and add a label to his content, Jay started making 3 am videos. Now, if you are wondering if 3 am videos were adult, nope! Those videos were anything but adult. The awful videos are notorious AF, IMJayStation wanted to make horror content by going to haunted places, or just stir some horror conspiracy in every other video.

You will find 24-hour overnight challenges, Vlogs, 3 am challenges and bombardment of the word “guys” that’ll nauseate you and probably, will land you in an ER soon. Moreover, you will even find many videos by other YouTubers debunking all the fake “horror” content posted by IMJayStation on YouTube. To summarize, you can check this detailed list of controversies involving Jay.

On November 3, 2019, IMJayStation posted a video titled: “WE BOUGHT A SLAVE OFF THE DARK WEB!! (VERY SCARY)”. It is really scary, considering all of Jay’s videos are scripted and fake. And the whole motive behind the video was to get more views and generate money.

In the video, Jay and his friend Ahmed decide to buy a slave “off the dark web” in order to set him free. They only have 3 options available on the “slavery palace” website (slow claps). Each slave costs $10,000. Out of these three options, they pick this particular slave (slave #397) because it shows he has a sister who is in the torture room for a month. So, Jay and Ahmed buy him to set him free. 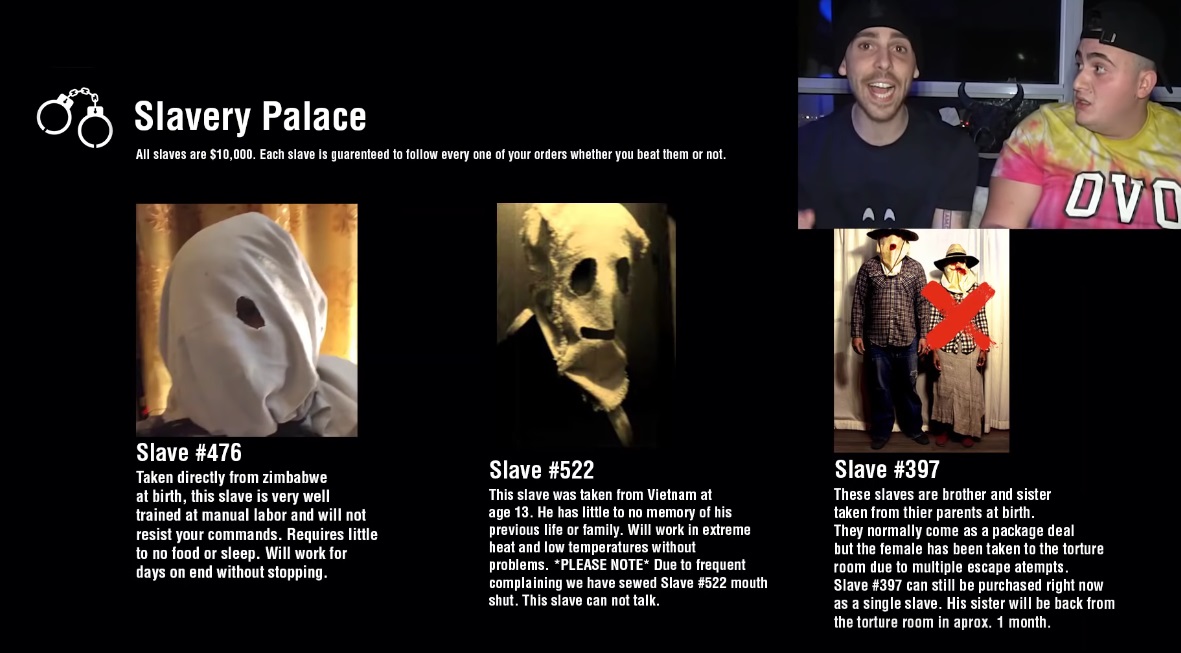 So, the “slave” is purchased and he arrives at Jay’s location within 3 hours. he is wearing a mask with fake blood on it as well as on his sleeves. The slave is shown to be brainwashed who just wants to clean everything. Oh and that slave keeps calling Ahmed “kidneys”. The video takes an expected turn of course. Both Jay and Ahmed are scared of him and they still want him to clean their house because they paid for his freedom.

we might as well, just like, make him clean stuff for us before we set him free.

Ahmed says he should also get the slave to make a meal for them. And the soft-hearted Jay says:

bro we might as well get our money’s worth, he was expensive.

Related: Leslie Jones Reminds Us How Racism is Still Rampant In Modern America

In the first video, IMJayStation and his friend Jay leave the “slave” unattended but they have CCTV cameras in every corner of their accommodation. They show the slave as a thief who steals Ahmed’s laptop and Jay’s phone. He also wanted to sell Ahmed’s kidneys as well. But the plan gets ruined and Ahmed stays safe while the slave runs away empty-handed.

But it does not end there. Jay shared another video on his IMJayStation YouTube channel with the title: WE FINALLY UNMASKED THE SLAVE OFF THE DARK WEB!! *HE WAS CRAZY*.

This time, Jay’s girlfriend joins in as well. Jay, Ahmed and Jay’s girlfriend Alexia (who was bought from the dark web as well, another sick video) gather together. They track the slave using Ahmed’s laptop location, “kidnap” the slave and bring him back to their living room. Then they unmask him and the guy is an African-American. This video is so nauseating and humiliating for the whole YouTubers out there who are trying to actually make a difference. Jay used “slavery” and “racism” to gain views and earn money. Both of these videos are still monetized. Apparently, the YouTube algorithm is being run by the “Black Web” as well because they have not taken down or banned this offensive content at all.