People who follow influencers and YouTubers know about the latest feud between Gabbie Hanna and Trisha Paytas. Both of them have a history with the Vlog Squad which connects them. However, it was more like an acquaintanceship. However, the third wheel of this love triangle: Gabi Demartino, has no link with the Vlog Squad. She is also a YouTuber and until a few days ago: one of those rare YouTubers with no drama. However, her involvement with Trisha Paytas during Blood Queens shoot led to both of them spilling some tea on some people. Even though Gabbie Hanna and Trisha Paytas have currently taken the route of giving each other a silent treatment; Gabi Demartino is unable to move on. Proof? her latest confession clarifying her side of things. Though, the confession is a bit flawed.

A Brief History of Youtuber War-1

Trisha Paytas talked “shit” about Gabbie Hanna, but she is not scared of those words being exposed to the public. However, Gabi Demartino spilled tea about two of her ex-friends (names not disclosed) and she is very scared of Trisha Paytas exposing her.

Trisha Paytas and Gabi Demartino turned into Gossip Girls at a sleepover after shooting for special episodes of Blood Queens. Trisha confirmed she does not like Gabbie Hanna due to many reasons. Meanwhile, Gabbie Hanna noticed her friend Gabi posting stories and images with Trisha Paytas on her Instagram and Twitter handles. She must have seen the post where Trisha called Gabi her daughter.

And a few days later, what these ladies keep calling “shit” literally hit the fan. While Gabbie Hanna is promoting her latest track Broken Girls, and Trisha Paytas is settling in her new home after her Lamborghini was stolen; Gabi Demartino is still stuck in the limbo. (We can imagine her situation. It is her first YouTuberdrama and the hatred thrown by your rival’s fans can get on your nerves).

Gabi posted a long and detailed note on her Instagram stories a few hours ago. The note is extensive, consisting of 8 pages (or 8 Instagram stories). In fact, the note can also be called a brief history or essay on Trisha Paytas-Gabbie Hanna feud from Gabi’s point of view.

Gabi says the scandal between Trisha Paytas and Gabbie Hanna broke out about an STD. And then she goes on about how Trisha said “mad shit” about Gabbie and how Gabi tried to be an adult and lied to Gabbie, to cover Trisha. She accepted her lies later and apologized to Trisha, who is not willing to forgive her. Well, Gabbie told Jason Nash that Trisha might have an uncurable STD: Herpes, back in 2017 when they just started dating. She even asked Jason Nash to get himself checked as they were having unprotected sex.

Anyways, back to the current year; Gabi states Trisha scared her by threatening to expose her secrets and “blast” her. She kept harassing her so Gabi posted another lie to cover her previous lie and solve the whole feud. However, Trisha Paytas still used her messages and screenshots to expose her to public platforms.

I’m assuming her cardboard cut out wedding didn’t get the hype she wanted so therefore I was next in line to be conned to keep her channel going. Trisha Paytas is known for her dramas and tactics to keep her channel growing, or gaining more views. However, this is one of those rare times when you have to agree with Trisha. Why? Because the opposite party is not coming up with strong evidence and proofs. First of all, when you are proving your innocence, you do not use words like this:

I have a heart of gold.

I’m 3-4 short texts between the two of us and I don’t understand why she had to bring this to the public in the first place.

Wasn’t it Gabbie Hanna who posted STD-related stories on her Instagram first? She did not use Trisha Paytas’s name but Trisha knew she was talking about her and Jason Nash. That is why she made the video in response to Gabbie Hanna’s Instagram story. It was a “response”. (Or am I mixing up the timeline?) .

Me nor Gabbie decided to bring this to the internet. But guess who did. 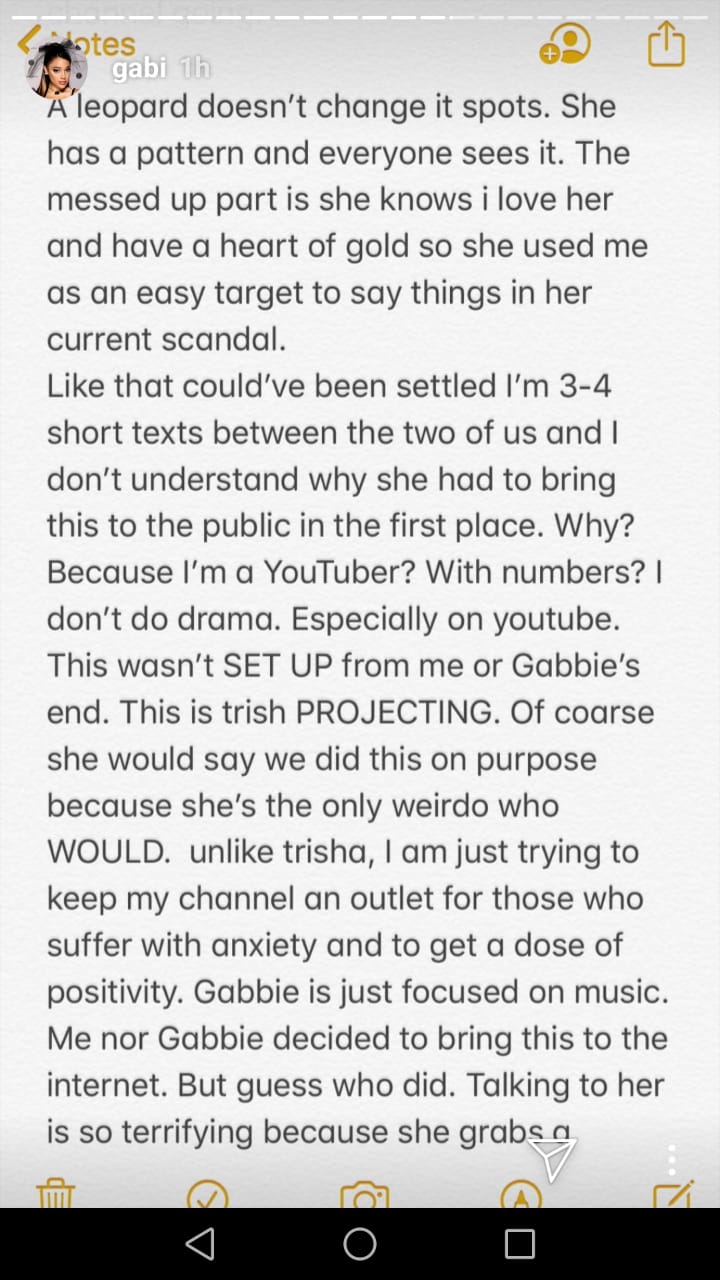 Trisha used YouTube to respond to Gabbie Hanna’s Instagram stories. Both are the “internet”. Moreover, Gabi Demartino confessed that she was saying everything she could to make Trisha stop because she was scared,

I was scared and in doing so I threw Gabbie under the bus. 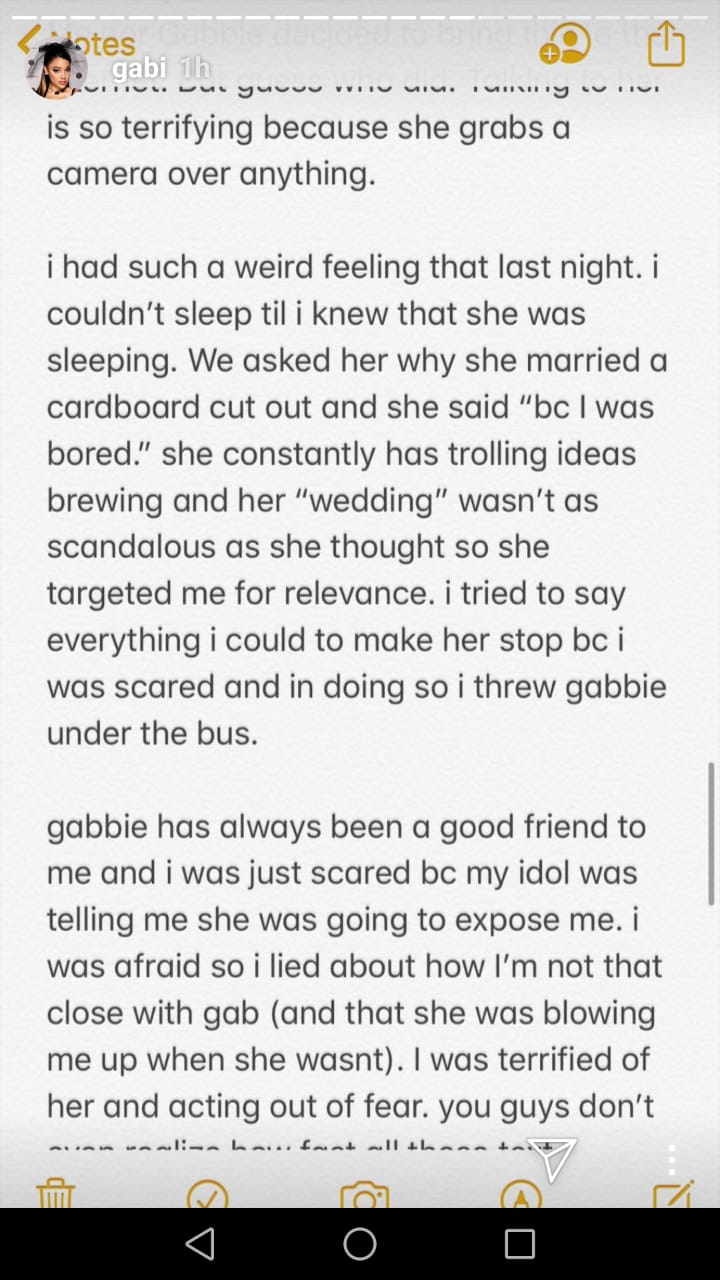 Towards the end, Gabi says she feels manipulated and lied to. Wasn’t she also using lies in the first place? Gabi also said she is moving on from these beyond childish games. We really hope she does move on as she is the only one still discussing the Trisha Paytas-Gabbie Hanna feud.

Related: Jason Nash Desperate To Find GF After Trisha Paytas Wedding?
Gabbie HannaGabi DeMartinoTrisha PaytasTrisha Paytas and Gabbie HannaYouTuber Feud
0 1,624
Share
Subscribe to our newsletter
Sign up here to get the latest news, updates and special offers delivered directly to your inbox.
You can unsubscribe at any time