These days have been very eventful for the Vlog Squad with one of the former members being accused of committing sexual assault. A 20-year-old woman made the allegation that Durte Dom (Dominykas Zeglaitis) raped her while she was drunk. The woman also stated that she and her friends who were not of legal drinking age were supplied drinks by adult vlog squad members. Of the people named are Jeff Wittek and Todd Smith. Now, Wittek is denying that he had any involvement in this case.

During the night of the sexual assault, Durte Dom invited over a group of young girls to their apartment. Initially, there were most of the Vlog Squad members there. David Dobrik, Jason Nash, Durte Dom, Jonah (Nick Antonyan), Trisha Paytas, Jeff Wittek, Todd Smith, and Alx Earnst.

The girls weren’t sure that they were supposed to have a sexual encounter with Durte Dom and in the original vlog, David says that they all were reluctant to do so.

In the vlog, Dobrik says,

“For a couple of minutes talking to them it was clear to us that the fivesome was not happening tonight but by a stroke of luck and master negotiating Dom made progress.”

Durte Dom didn’t let her leave either and her friends had to step in to get her out and even clothe her. The girl couldn’t even put on her own clothes because she kept vomiting as she was so drunk.

Jeff Wittek was present in the original vlog

“All right, we got three in there”.

A heated argument took place on Twitter between Trisha Paytas and Jeff Wittek. Wittek denied that he had any involvement in supplying alcohol to the group of girls on the day the assault happened. This was in response to when Trisha called him out for suppling the drinks.

Jeff Wittek tweeted out saying that he did not buy ‘anything for anyone’. And furthermore that he can prove that by going to any extent possible.

Trisha Paytas called him out and said there were underage girls getting alcohol and how the girls were hesitant at first and they had to be ‘convinced’ for a sexual encounter they did not want to do. She points out that he was present at the start and end of the vlog.

To that Wittek explains that he was only there for fifteen minutes and that all the accusations Trisha made against him are false.

In the tweets, Wittek says that his heart ‘goes out entirely to the victim’ and that he’s apologetic that the situation ever happened. He further says that he wasn’t aware of what was happening and that he doesn’t condone the ‘disgusting actions’ that Dom had committed.

Jeff Wittek further adds that if he knew a girl hadn’t given her consent to have the sexual encounter, he would have stopped it right away. He just was under the impression that it was all consensual. 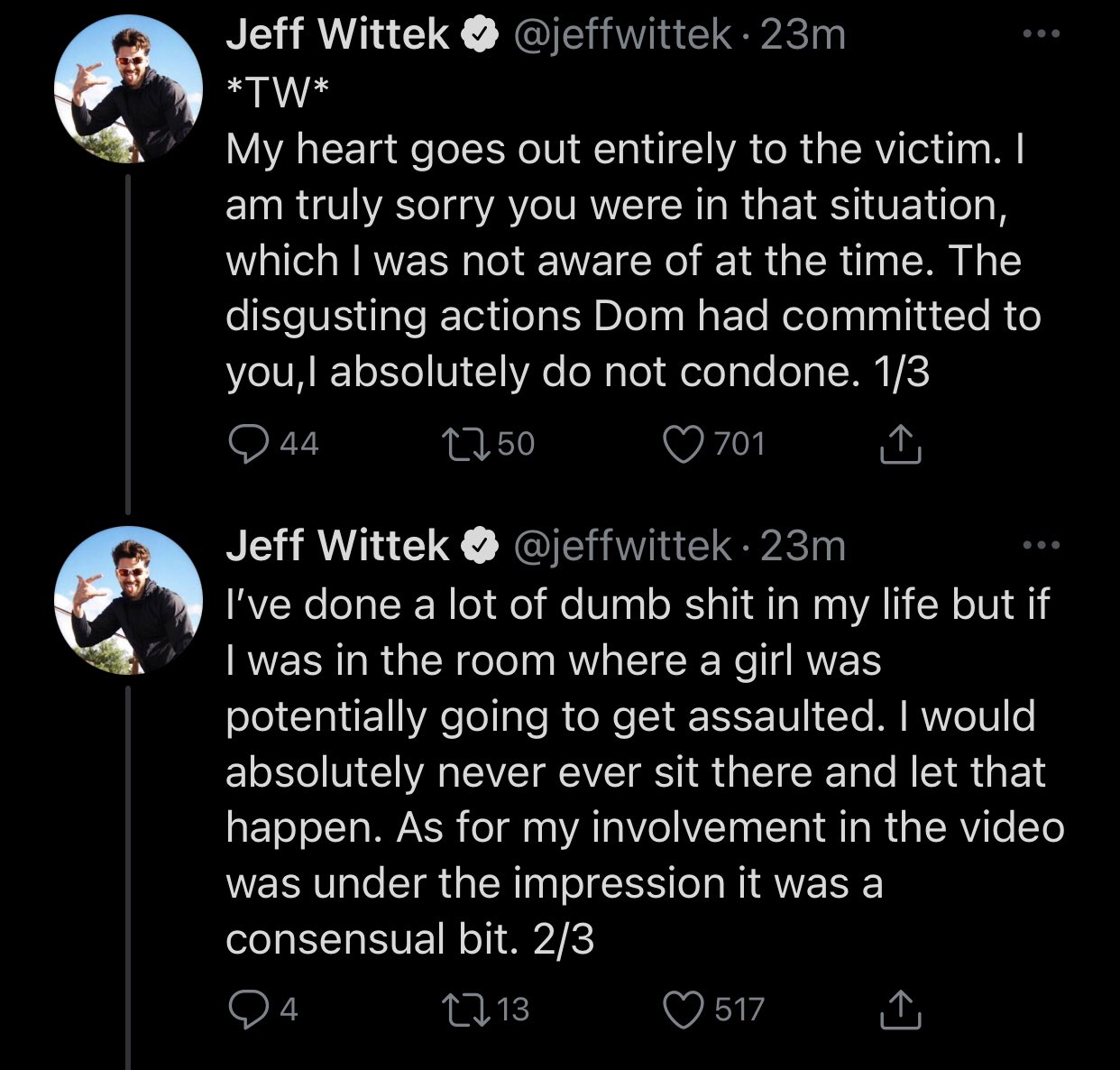 And later he again reiterated that he had ‘absolutely nothing to do’ with the events that took place that night. He denied buying alcohol and added that he respects women and wouldn’t allow such actions to happen to them.

David Dobrik has addressed the situation as well

Meanwhile, David Dobrik has a made an apology video saying that “consent is something important to him”.

“I love being able to make people happy for a living. That’s all that I want to do. That being said, consent is something that’s super important to me. Whether I’m shooting with a friend or a stranger, I always make sure I have the approval from that person. There’ve been moments where I’ve looked back on videos and I’ve realized these don’t represent me anymore. They’re hurtful to other people.”

He also condemned Dom’s actions and says he has distanced himself from him because their views don’t align together anymore.

“With people in my life that I don’t film with anymore, like Dom, I chose to distance myself. I don’t align with some of the actions, I don’t stand for any misconduct. I’ve been really disappointed by some of my friends. For that reason, I’ve separated from a lot of them.”