After the bizarre cannibalism rumors that have surrounded Armie Hammer, his ex-wife Elizabeth Chambers has finally broken her silence on the matter. Chambers filed for divorce from the actor in July of last year and has recently commented on a report on one of Hammer’s director and co-star in his film, Call Me By Your Name.

It all started when Just Jared shared a report on Instagram about the director Luca Guadagnino and Timothée Chalamet’s upcoming movie, named Bones & All. Ironically, this movie is about cannibalism. Hollywood Reporter described that the movie follows a woman:

on a cross-country trip as she searches for the father she’s never met in an attempt to understand why she has the urge to kill and eat the people that love her.

When Elizabeth Chambers saw the headline with Armie Hammer mentioned in it, she commented underneath the post, saying: 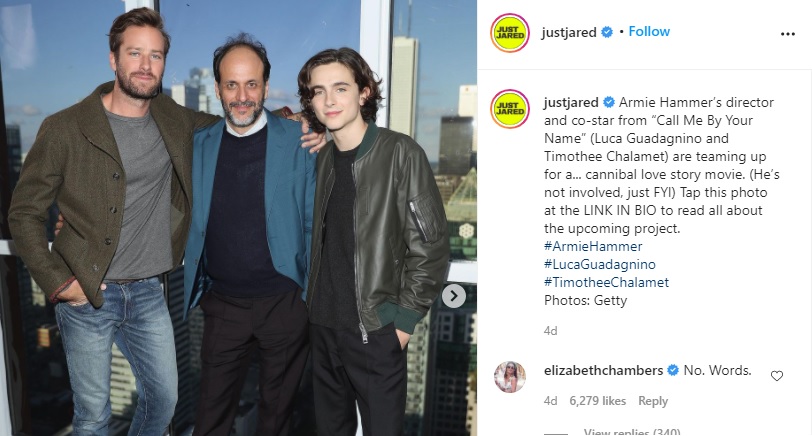 This is the first public comment that Chambers made on Armie Hammer’s cannibalism accusations. We’re not sure what she meant by this comment. She could be left astounded as to why Just Jared mentioned her husband in the report even though he is not involved in the movie. Or, this could be some kind of public statement from her. We just don’t know.

Last month, several leaked messages from an anonymous social media account alleged that Armie Hammer has cannibal fantasies. Ever since the allegations surfaced, Armie Hammer has dropped out from two projects. These were the upcoming action-comedy Shotgun Wedding starring Jennifer Lopez and the Paramount+ series The Offer. In a statement, Hammer said:

I’m not responding to these bullsh*t claims but in light of the vicious and spurious online attacks against me, I cannot in good conscience now leave my children for 4 months to shoot a film in the Dominican Republic. Lionsgate is supporting me in this and I’m grateful to them for that.

One of the Spokesmen of the production team said:

Given the imminent start date of Shotgun Wedding, Armie has requested to step away from the film and we support him in his decision.

Both Chambers and Hammer married each other in May of 2010 and have two children together. Last year in July, Chambers announced their divorce in a statement on Instagram, saying:

It has been an incredible journey, but together, we’ve decided to turn the page and move on from our marriage.
As we enter into this next chapter, our children and relationship as co-parents and dear friends will remain our priority.

Armie Hammer
0 489
Share
Subscribe to our newsletter
Sign up here to get the latest news, updates and special offers delivered directly to your inbox.
You can unsubscribe at any time