Larray, TikTok star, and popular YouTuber is recently being accused of sexual misdemeanor by someone who claims to attend the same high school as Larray. The YouTuber denied all allegations of a sexual misdemeanor and claimed that he takes these things very seriously.

What were the allegations against the YouTuber and TikTok star?

A person claiming to be an old high school batchmate of Larray’s shares that he was sexually manipulated and blackmailed by him.

From a TikTok account by the name ‘larrayisanabuser’, there were some TikToks detailing the whole incident.

“This is my story of how @Larrayeeee sexually manipulatd and blackmailed me along with 3 other men in high school..”

Then the alleged victim shared that he went to Alta Loma High School, the same one Larray attended.

In 2014, he was added on Kik by someone who was claiming to be a girl from his high school.

I was added on kik by a girl I thought I knew from Instgaram. We started flirting, and I felt like we were both super into each other. Then, she asked if I could send her n*de pictures of me. Again we were both being very flirty so I was okay with this and I sent the pictures.

Once I’ve sent the pictures, her tone changes. This is when she starts to threaten me that if I don’t “make out with Larray, then she’ll send my n*des to the principal to get me expelled. At the time, I was aware that Larry went to ALHS with me, but we never talked to each other. So why would she bring up Larry like that, completely unprovoked?

The person then talked to this same girl on Instagram. Then it was revealed that it was actually not the same girl on Kik, there was someone else behind that account.

It’s not clear who was the person, but the victim thinks it was Larray

The person shares that they think it’s Larray:

I went to her instagram and I asked her if I was talking to her on kik. She then told me that she doesn’t have a kik. So who else could it have been, other than Larry? At the time, I wasn’t entirely sure it was him, and I started to have a panic attack. I felt completely helpless. I ended up going and crying to my mom about what was appening.

Then the person says they eventually thought it was just a bluff. The person ended up blocking the Kik account, deleting the app. They also learned that his pictures were never sent to the principal.

After this, the blackmailer never contacted them again.

There were more victims that faced the same incident

But this person was shocked to find out that other people that attended ALHS had similar experiences. There was a blackmailer involved who would solicit explicit pictures and then force them to go make out with Larray.

This person talked to another victim that called out Larray on Twitter sharing their story:

So, I DMed that guy and I told him that I experienced the same exact thing in high school. He then tells me that he knows ANOTHER guy who also went through this pattern of blackmail with Larray’s name being brought up in regard to having their n*de pictures sent to the principal if they didnt s*ck Laray’s d*ck/makeout with Larray etc.

After this story, the first victim shared their abuse story on Twitter. And then they got responses from another account also sharing a similar experience.

But that third person was contacted by Larray.

So, I posted my own tweet corroborating the story of the other guy and accusing Larry of sexually manipulating and blackmailing multiple guys. At the same time, I start receviing DMs from a throwaway account detailing how THEY were also abused by Larry in the same exact way as everyone else. By this time Larry had contacted the first guy to come forward and spoke with him on facetime.

Larry apologized to the third victim but didn’t admit that it was him who was blackmailing everyone.

In the factime call, Larry apparently apologized for what they experienced, but he wouldn’t outright say that it was him that did all the blackmailing. After this call, the initial tweet calling Larry out was deleted. The guy told me that he just didn’t want to draw anymore attention to himself than he already had.

The first victim explains that they have no evidence as he deleted all the chats and the Kik app. And he further explained that he tried telling this story on Twitter but no one gave it attention, so he came on TikTok to make it.

The victim then says they want Larray to be ‘held accountable’.

I just want him to be held accountable for what he did us, nothing more.

He also shared pictures of his high school yearbook to prove that Larray went to the same school.

Here are all the screenshots from the TikTok video detailing the entire incident as well as Larray’s apology.

Alleged victim claims they sent a nude to someone, and that person ended up using the nude to blackmail them into kissing Larray. pic.twitter.com/on85xOu4Db

Larray responded and denied the allegations

The TikTok star and ‘Canceled‘ singer denied all allegations of blackmail and sexual misdemeanor. 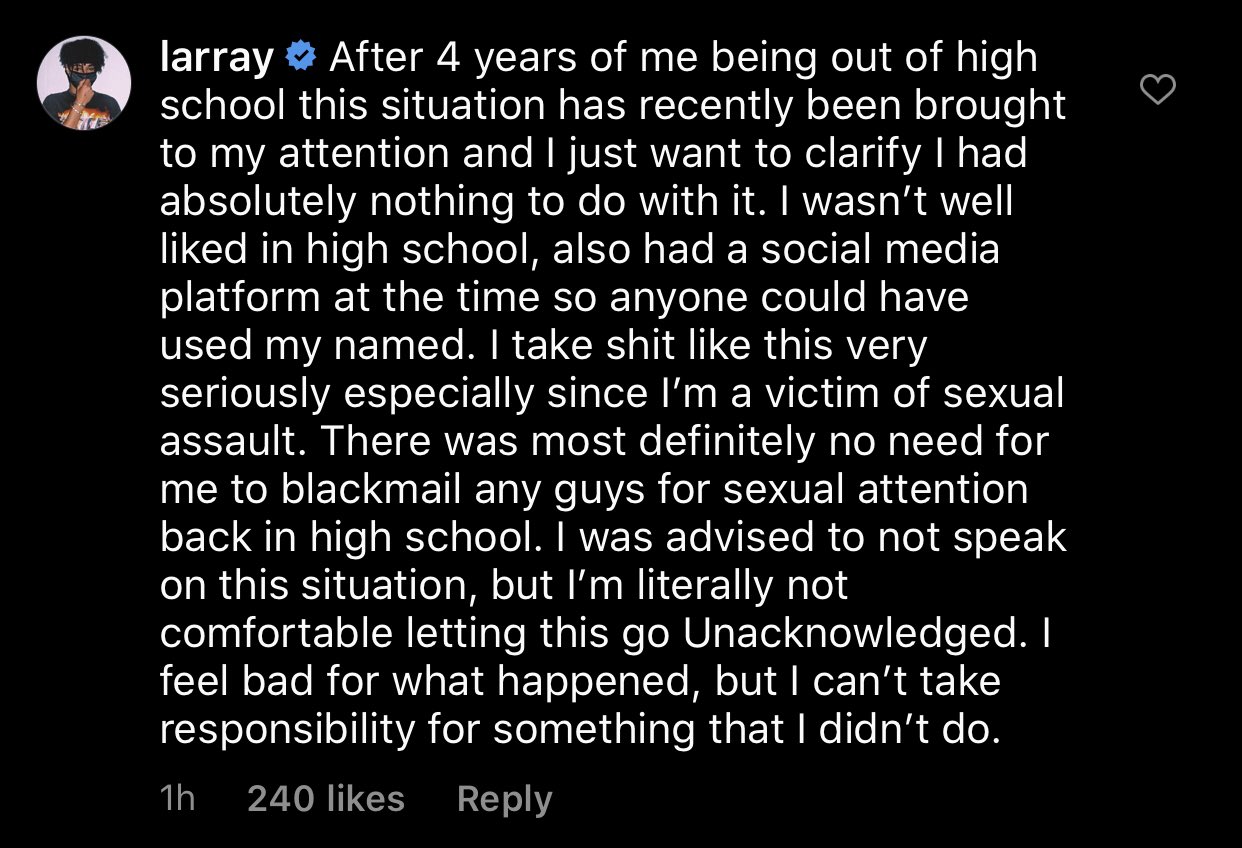 Larray says that he had nothing to do with the blackmailing incident.

He also added in that he was not ‘well liked in high school’. But that he did have a social media platform so it was easy for people in high school to use his name.

He also added that he takes things like these very seriously due to his own experience of sexual assault.

I take sh*t like this very seriously especially since I’m a victim of sexual assault. There was most definitely no need for me to blackmail any guys for sexual attention back in high school.

Larray also adds in that he should have ignored the allegations but he says he can’t take responsibility for something he took no part in.

The identity of the blackmailer is still unclear and the victims of this incident believe that it was Larray.

allegationsBlackmailingLarraySexual MisdemeanorTiktok
0 1,326
Share
Subscribe to our newsletter
Sign up here to get the latest news, updates and special offers delivered directly to your inbox.
You can unsubscribe at any time

Netflix’s The Mess You Leave Behind looks promising