Shane Dawson gets rather emotional over the anniversary of his makeup collection release. The conspiracy makeup collection, that he made with Jeffree Star, was a major event happening last year. Of course, at that time, he was not canceled and was actually enjoying a lot of fame, success, and money.

Last year, Shane Dawson teamed up with Jeffree Star to come up with a new makeup collection. It’s the Shane X Jeffree Conspiracy Makeup collection which included two makeup palettes, some lipsticks, and new merch items. He also documented the whole process for his YouTube Channel.

On his Instagram Stories, Shane Dawson posted his favorite memories of the whole event. 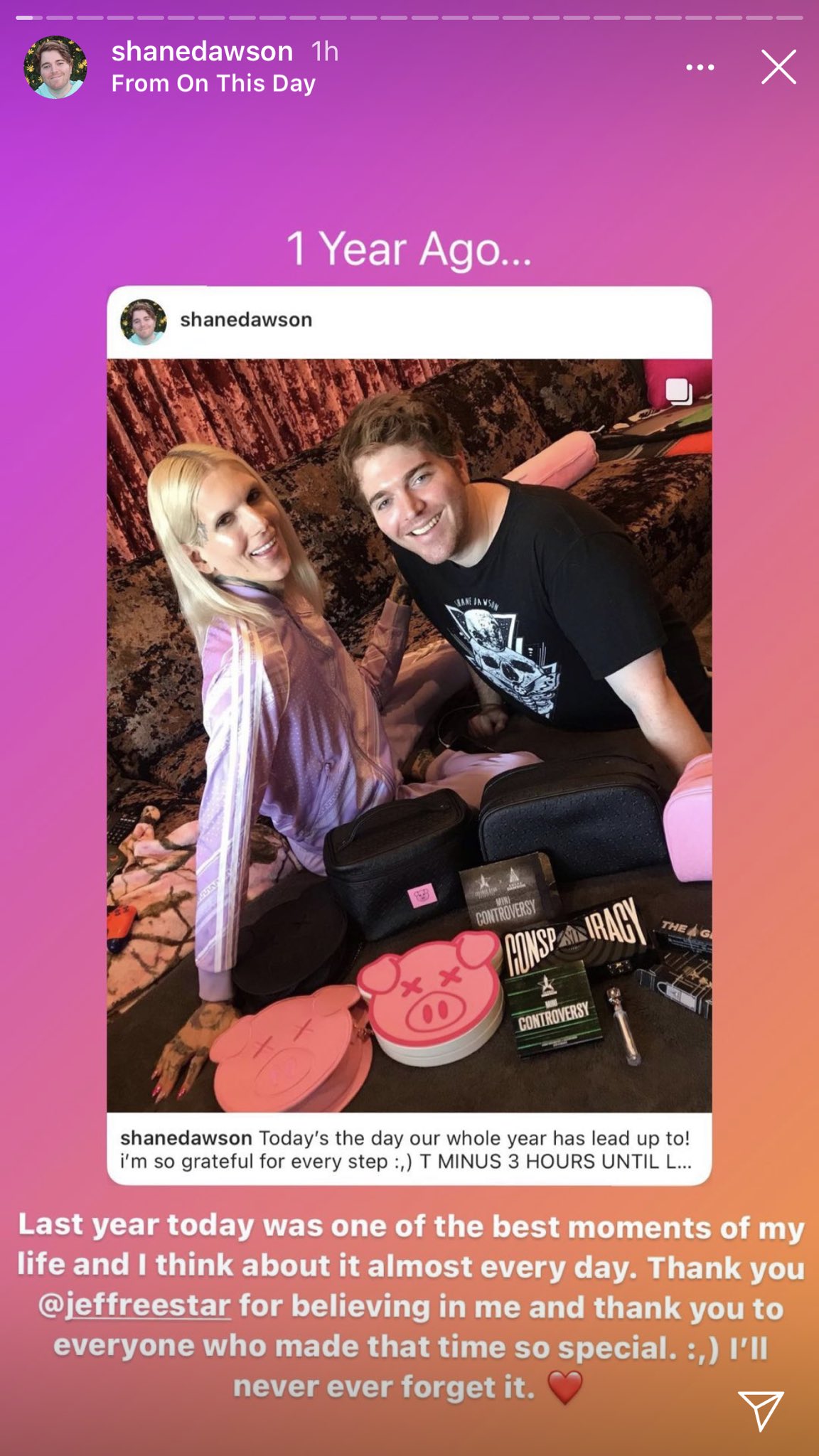 In the first, he reposted his Instagram post and thanked Jeffree Star for ‘believing in him’. He also thanked everyone else who made it special too. 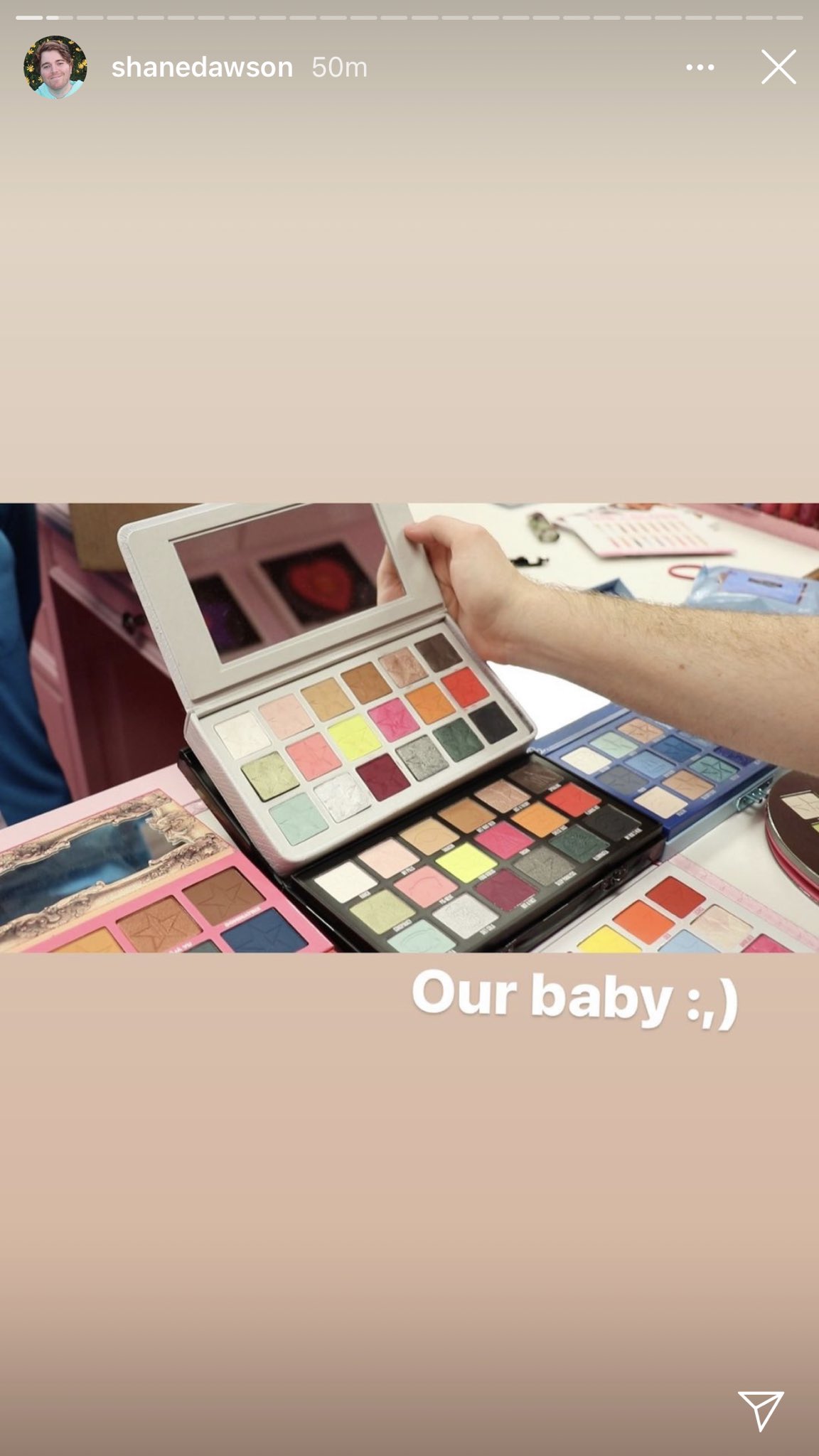 Adding the image of the conspiracy palette, he adds ‘my baby’. 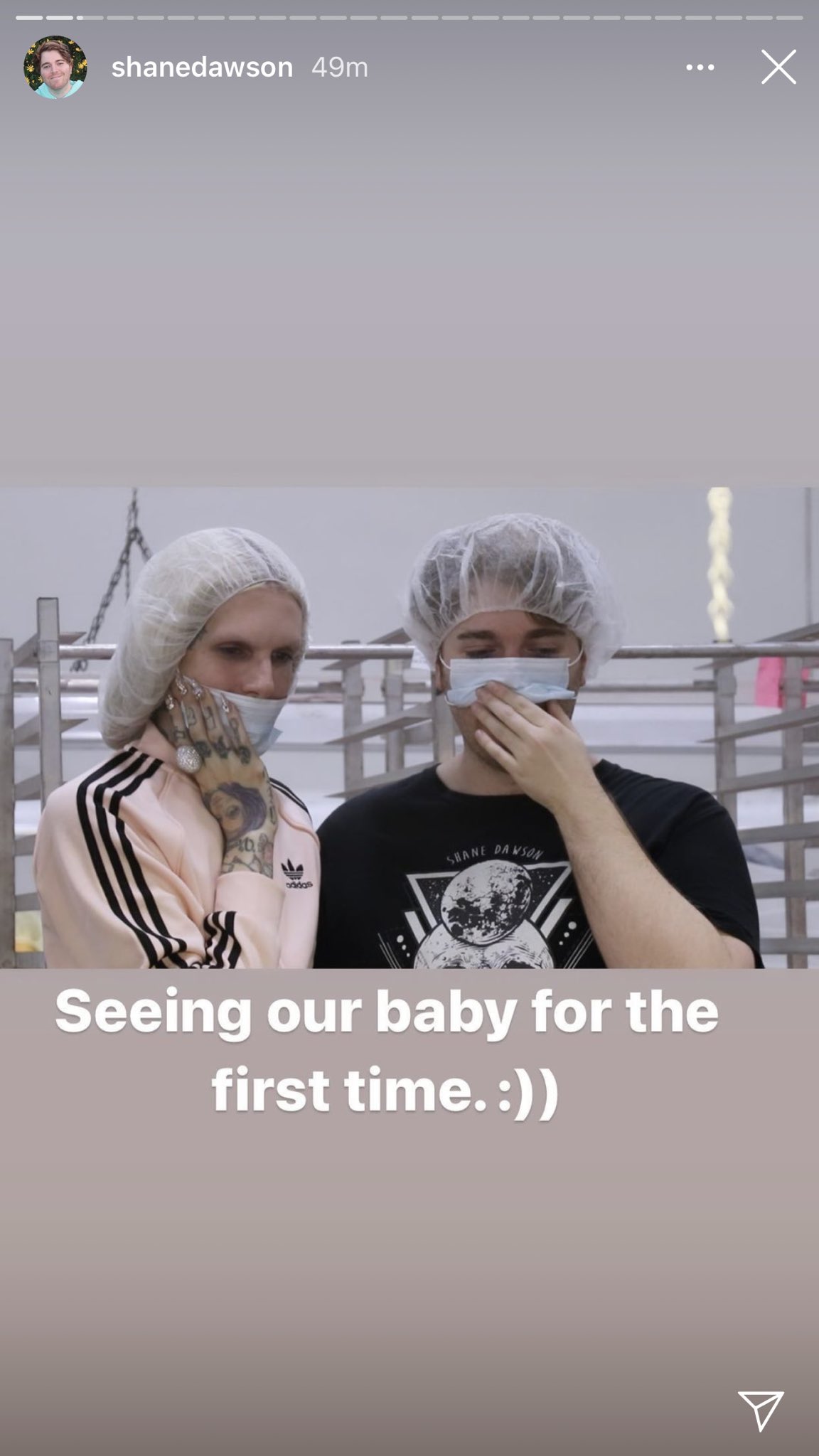 A reaction of both Shane and Jeffree looking at the product they made together. 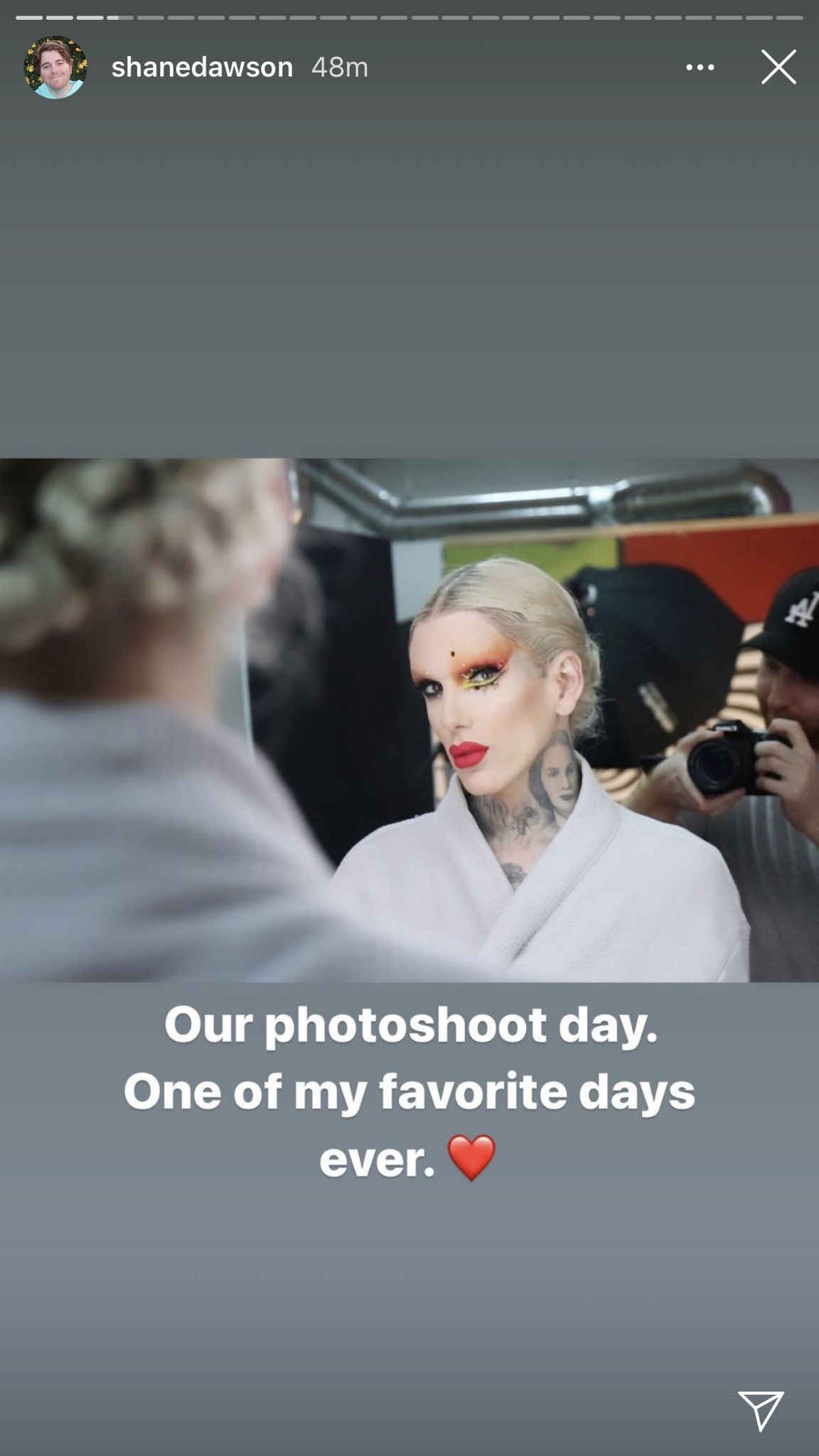 Shane recalls that his favorite time was when they did the photoshoot for the conspiracy makeup collection. 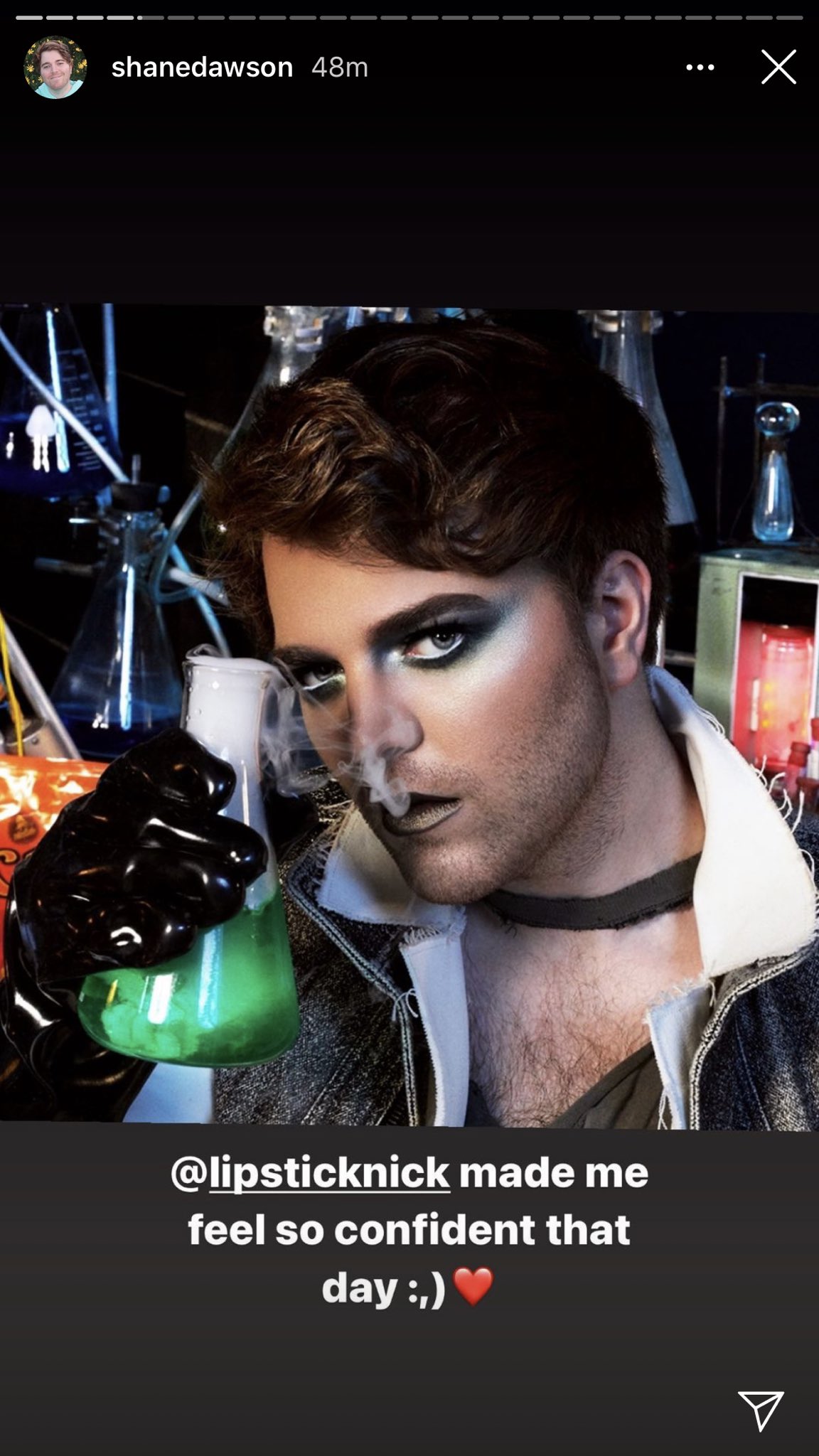 The YouTuber tells his audience that makeup artist lipsticknick made him ‘feel so confident that day’. 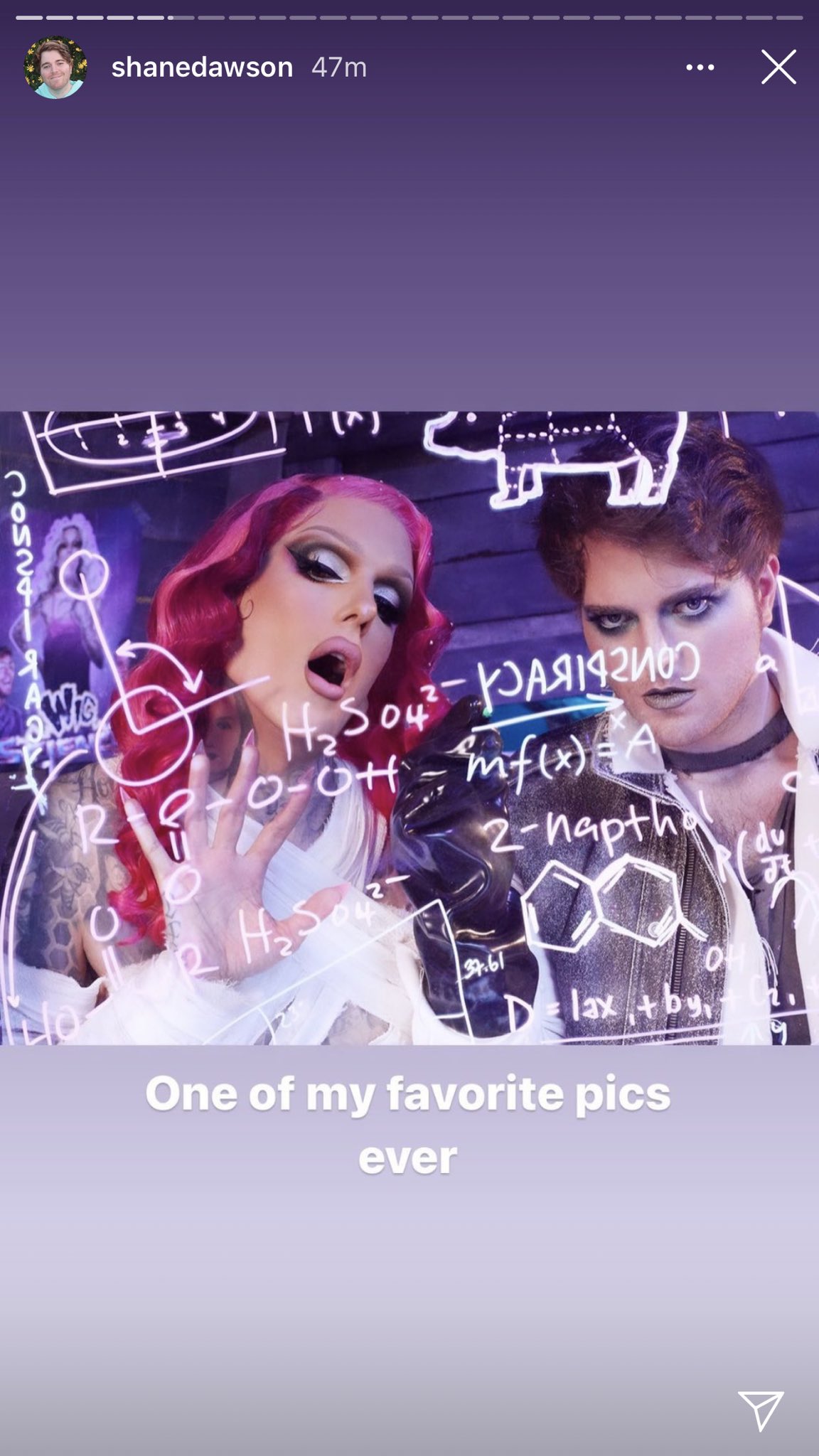 Shane shared this picture from their photoshoot and revealed that it was his favorite one. 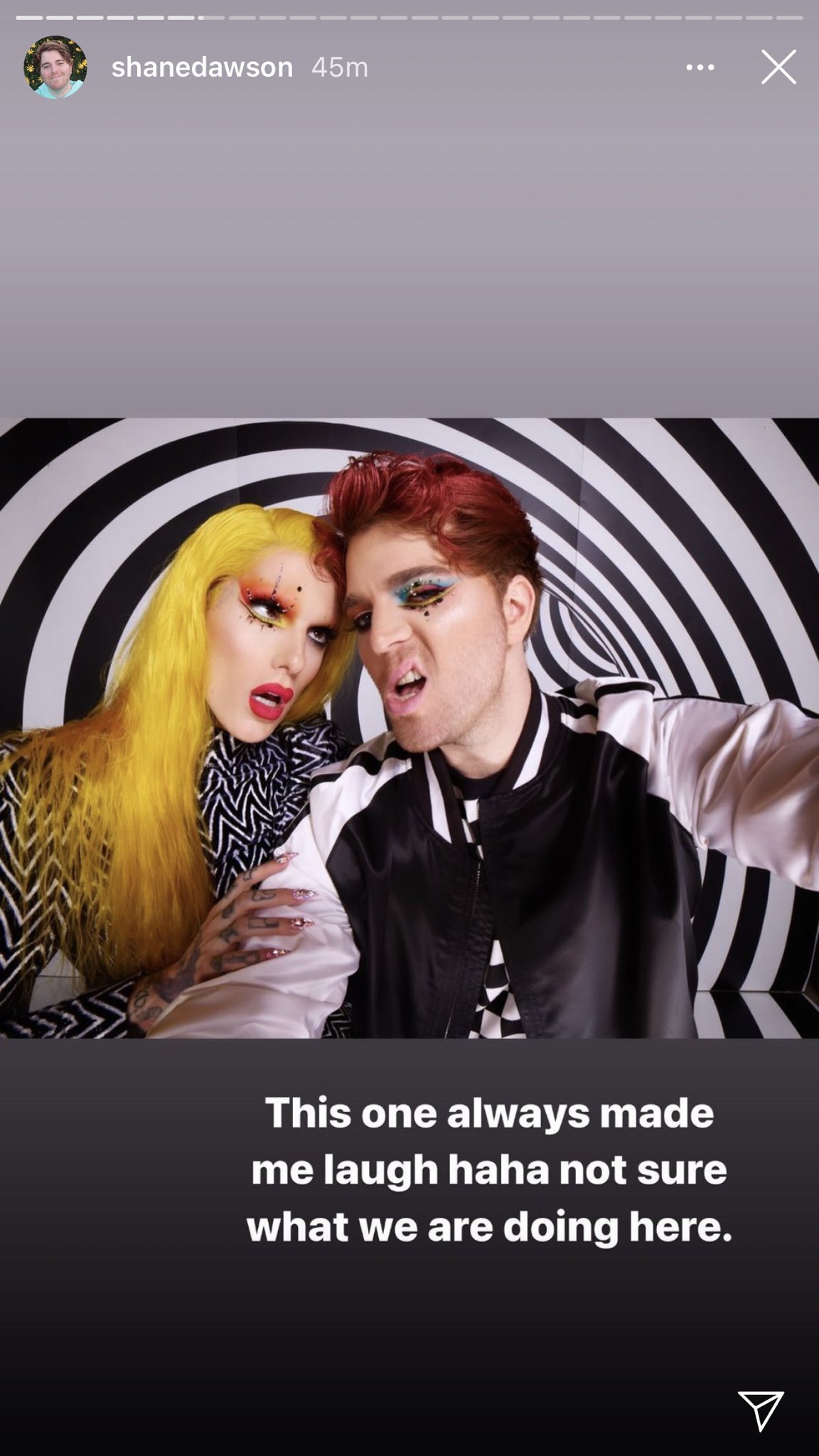 Another picture from the photoshoot archives. 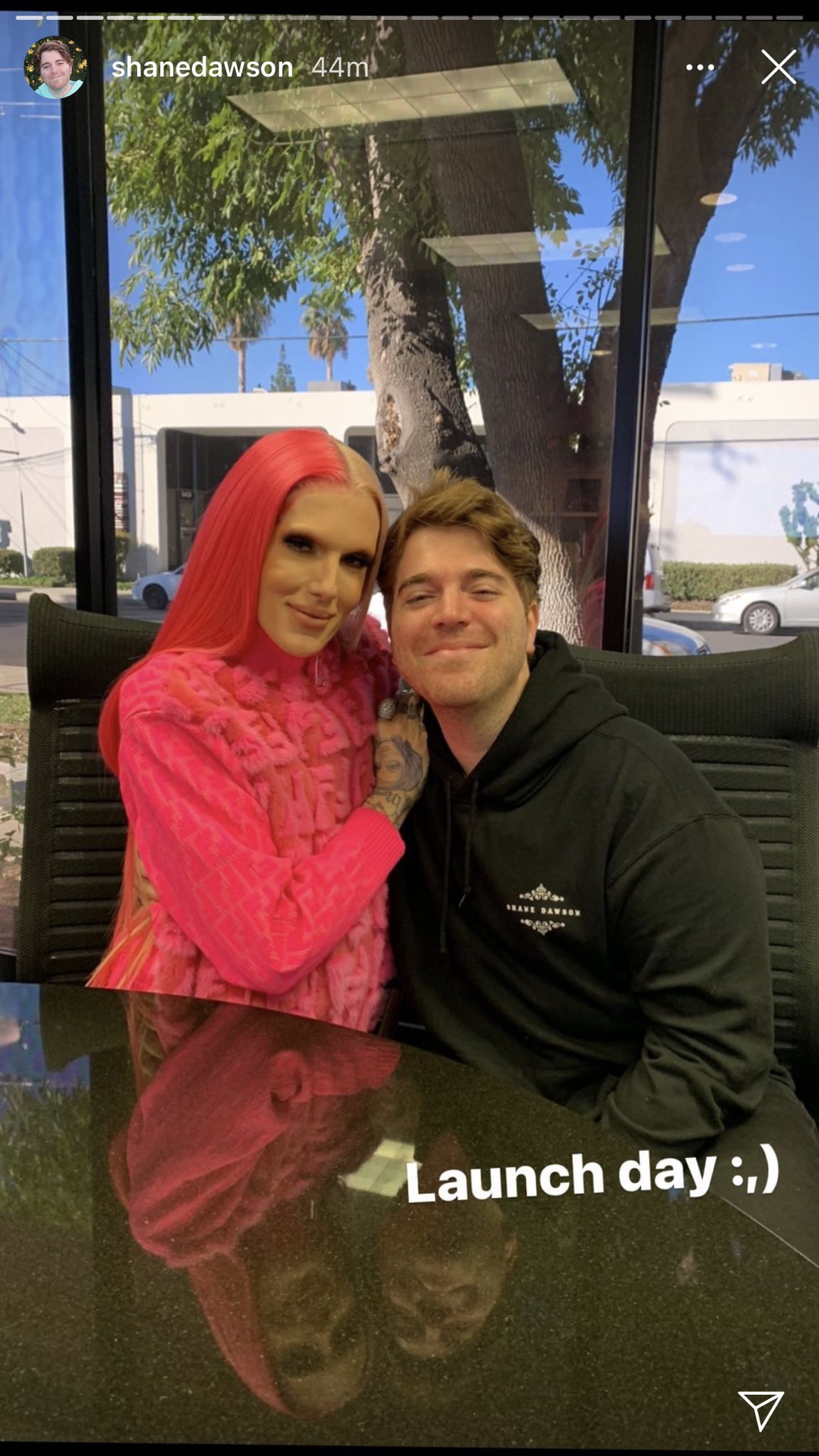 This is a picture from the launch day of their Conspiracy Makeup Collection. 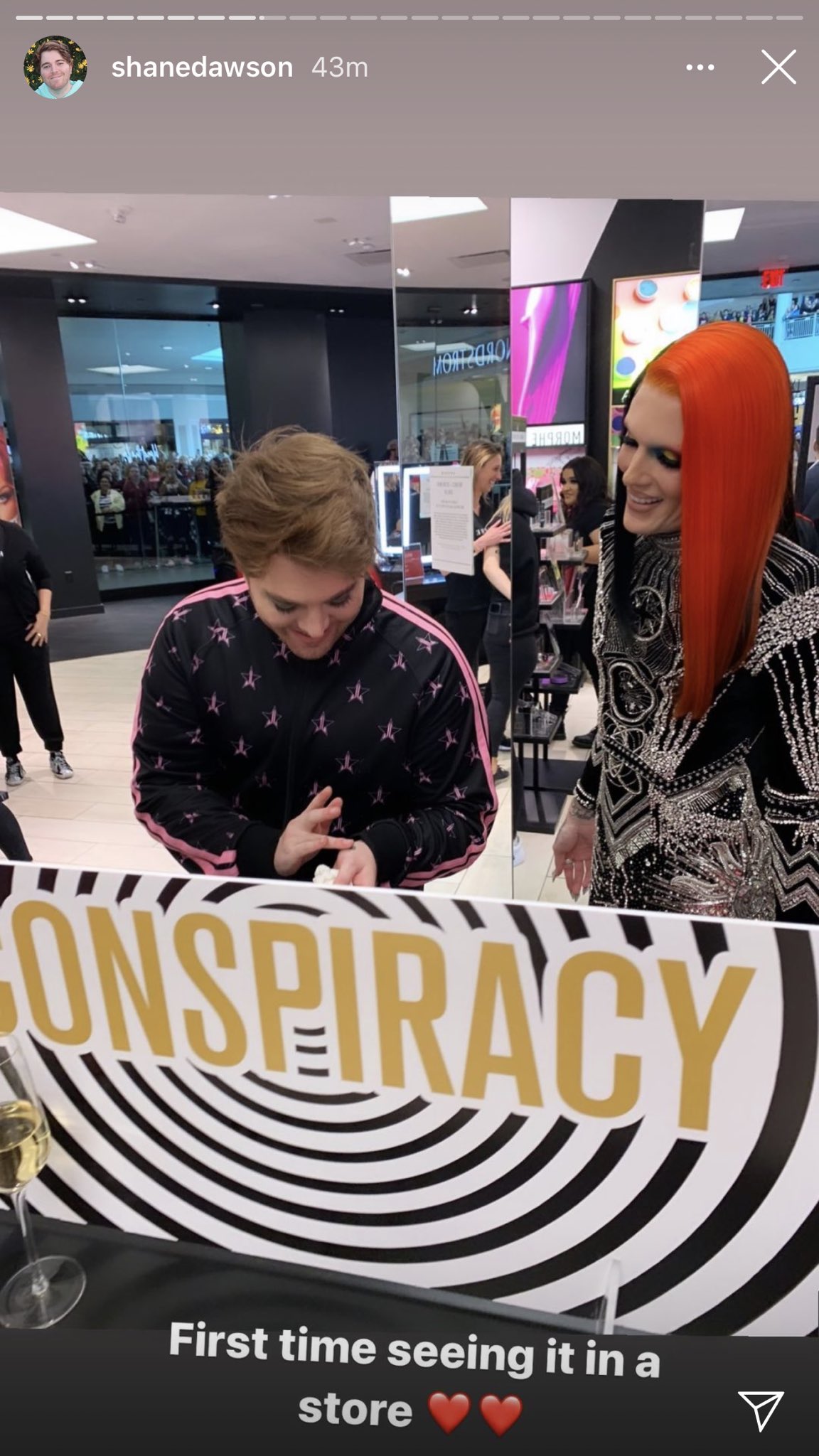 This is the first time they saw their products at an official store. 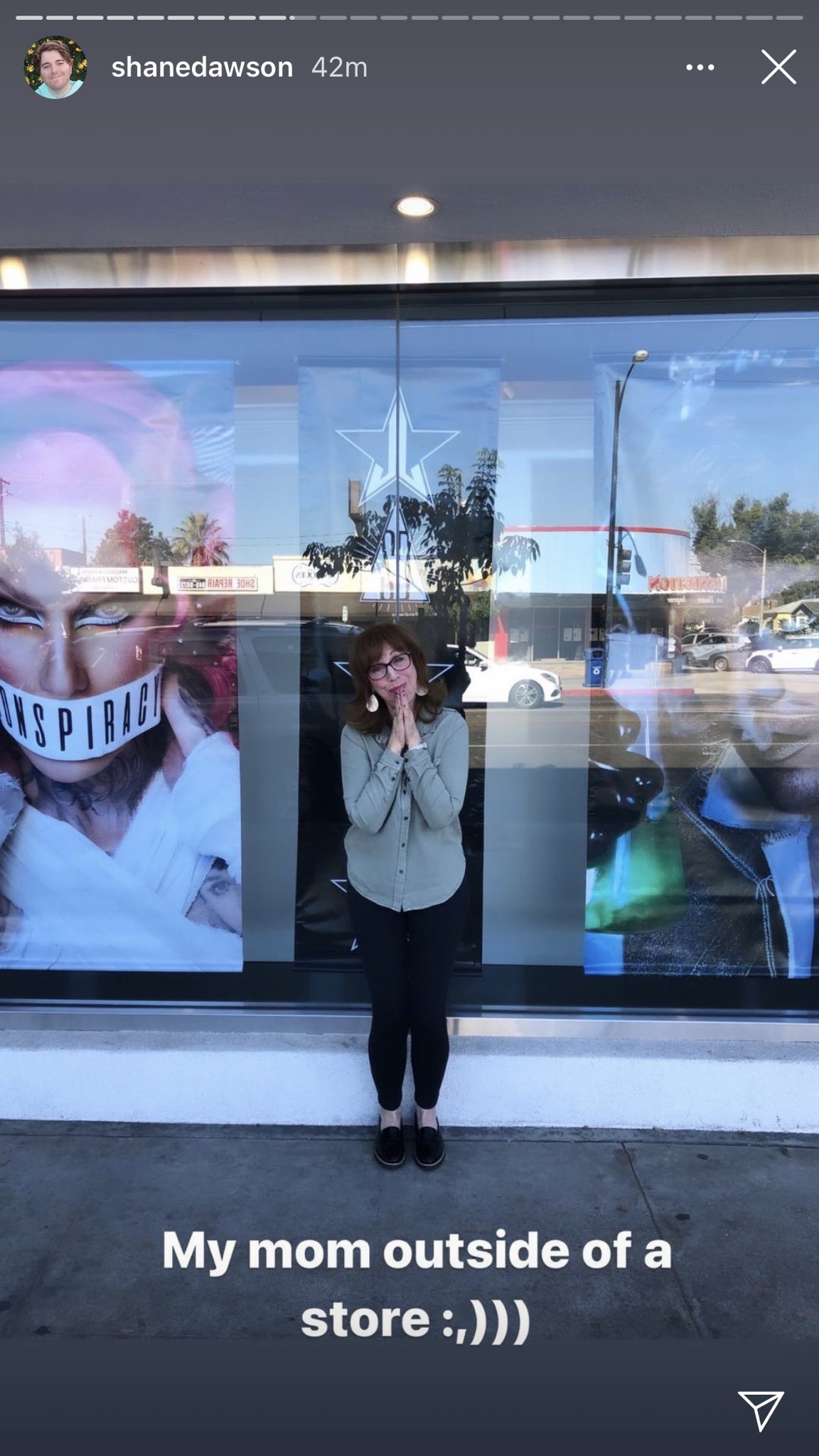 Shane Dawson’s mom, Teresa Yaw, is posing outside a store that is displaying their Conspiracy makeup collection. 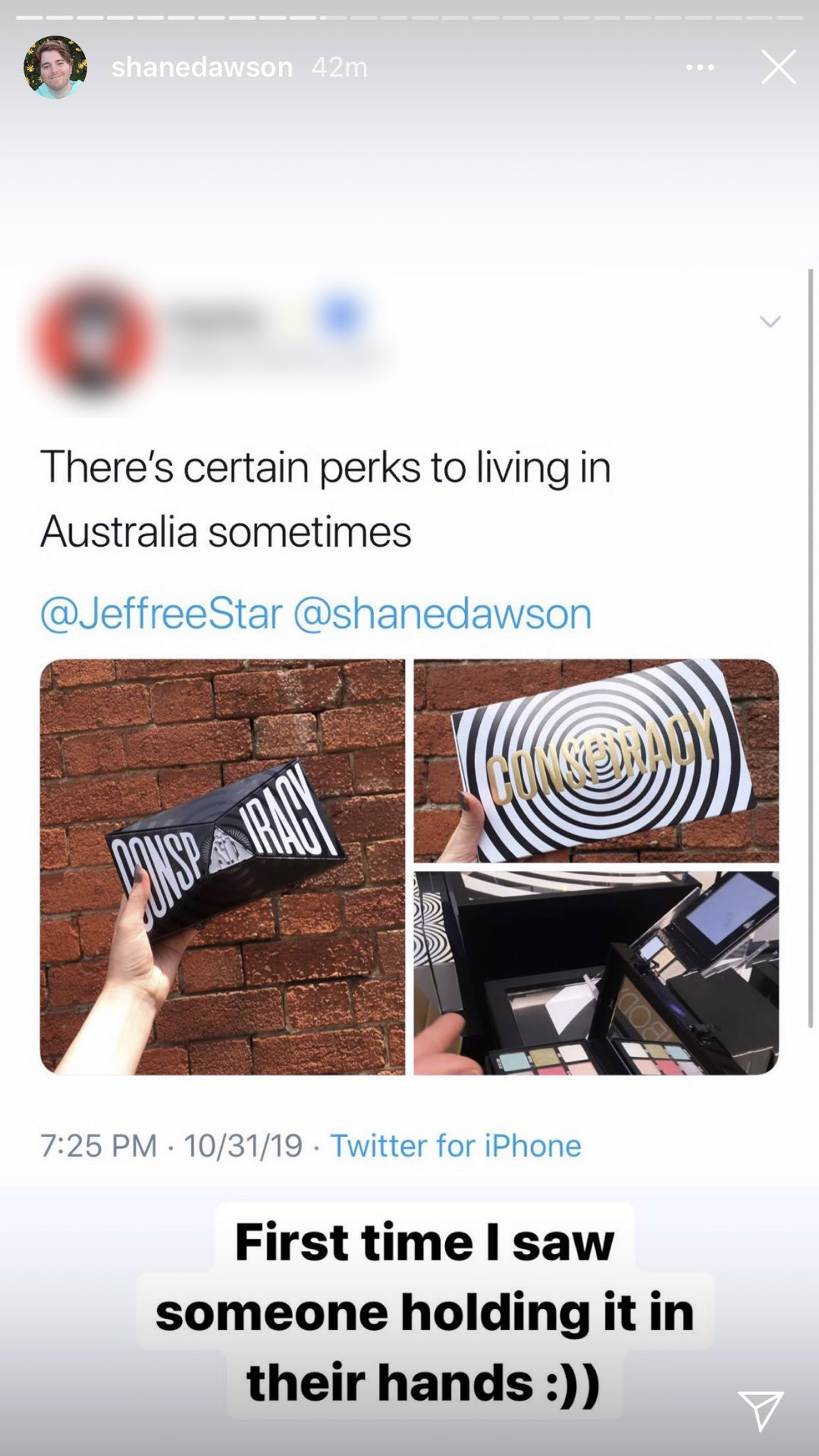 This is the first time Shane saw the products being held by a customer online.

Here is the first review he saw of the products. The review was done by Shane’s close friend Trisha Paytas, who still stuck by him despite the scandal. 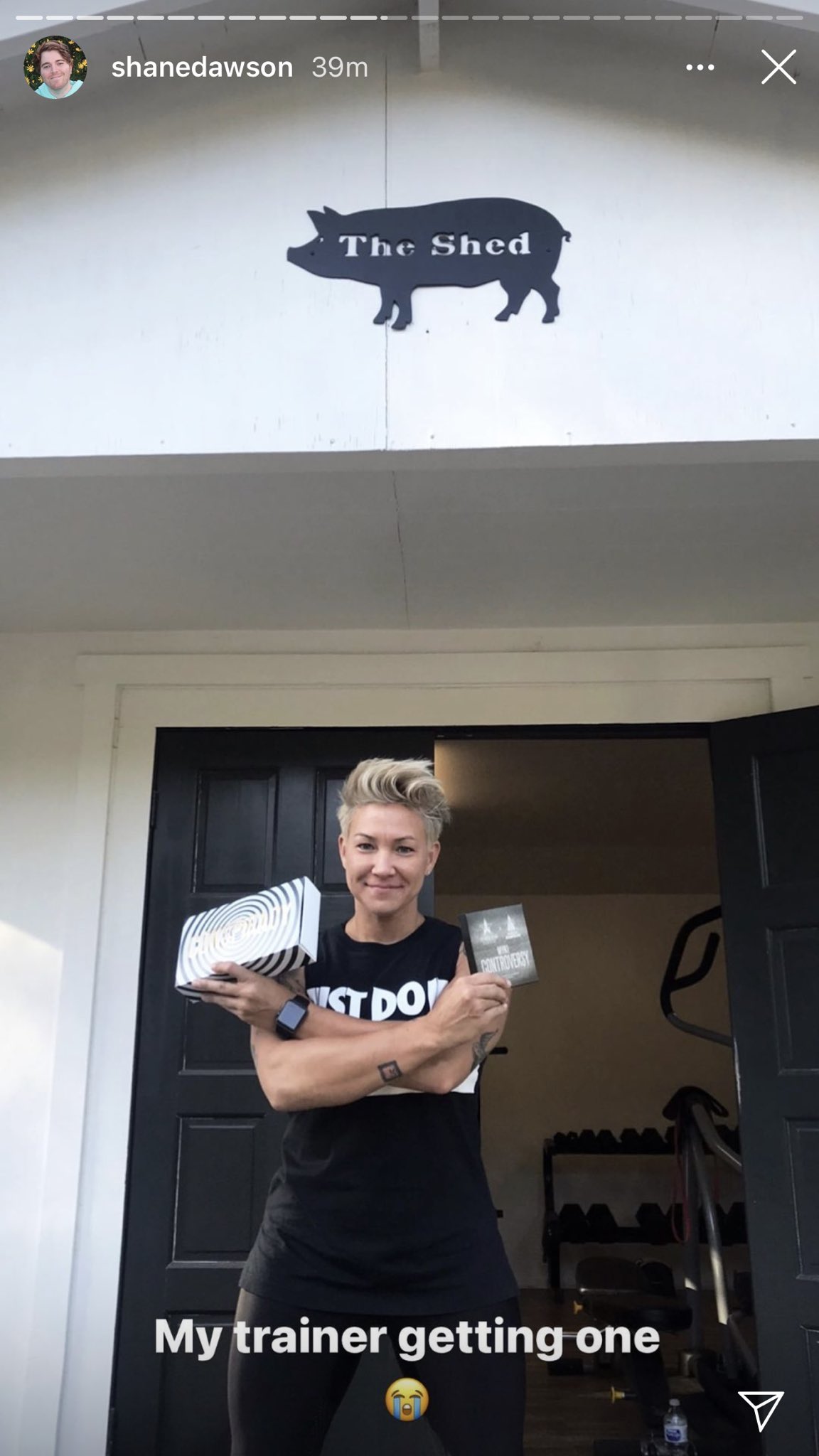 Shane’s trainer is posing with the makeup collection. 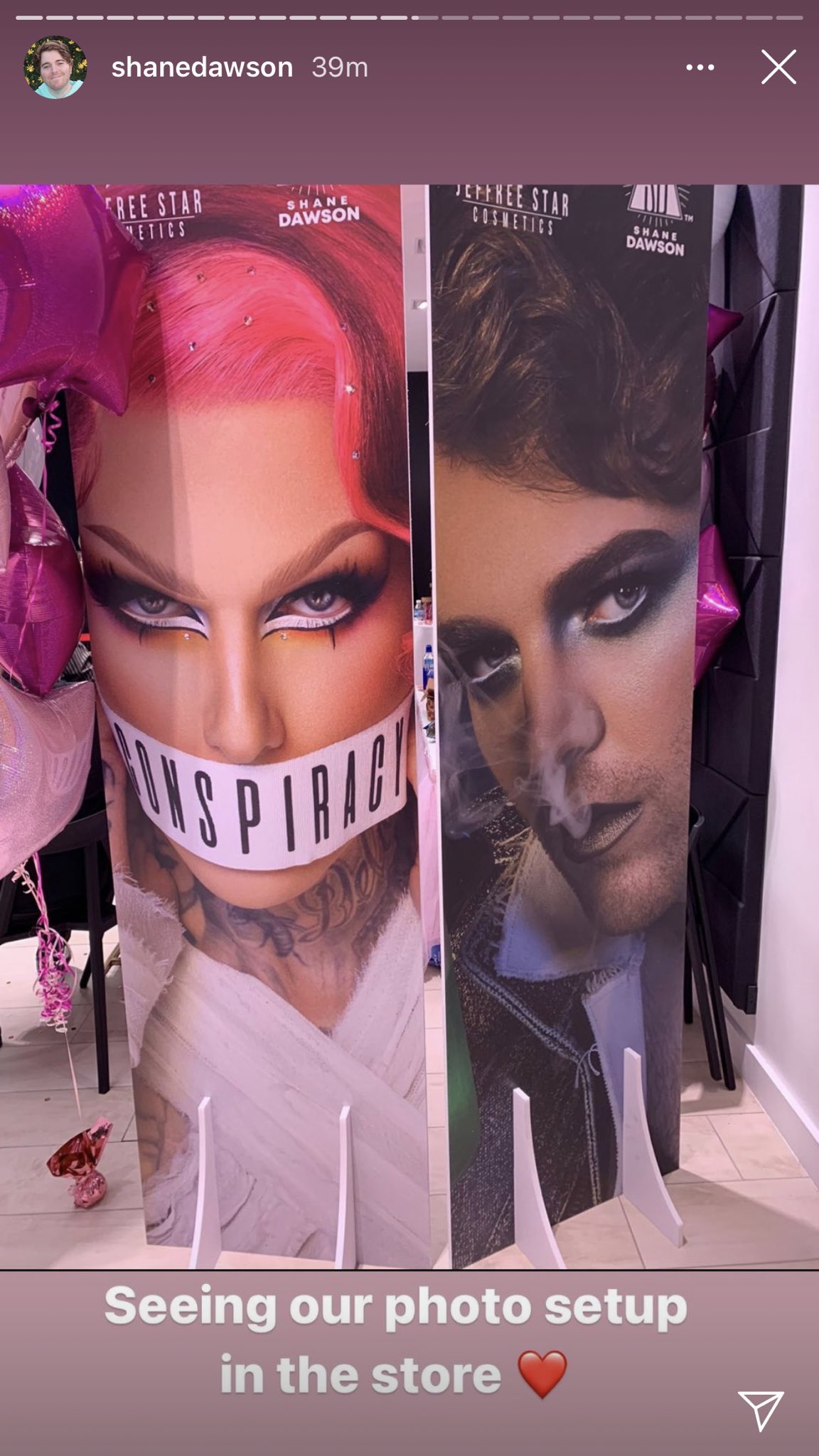 The photo setup of their collection at a store. 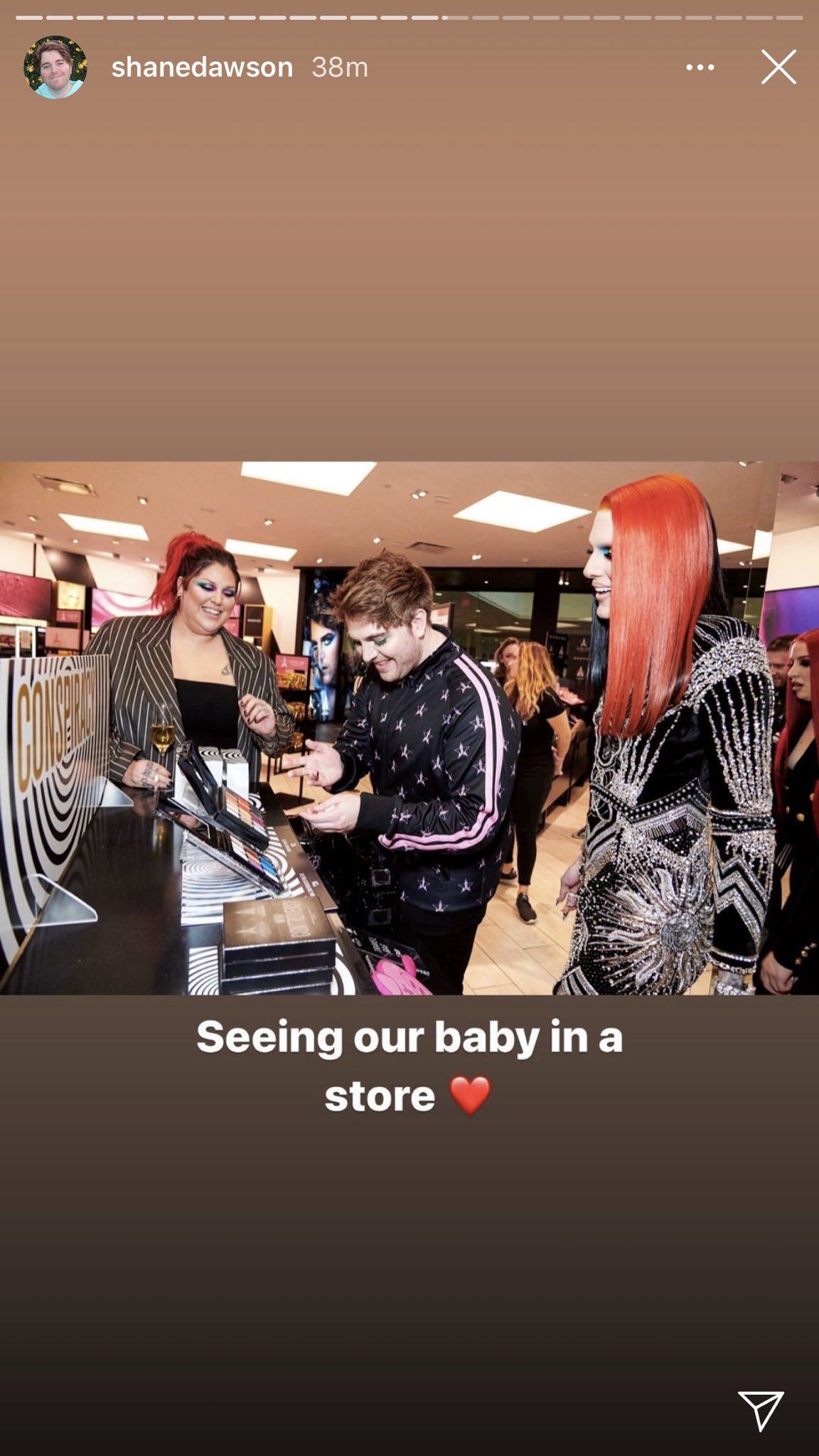 A picture of Shane and Jeffree seeing their beauty products at a store. 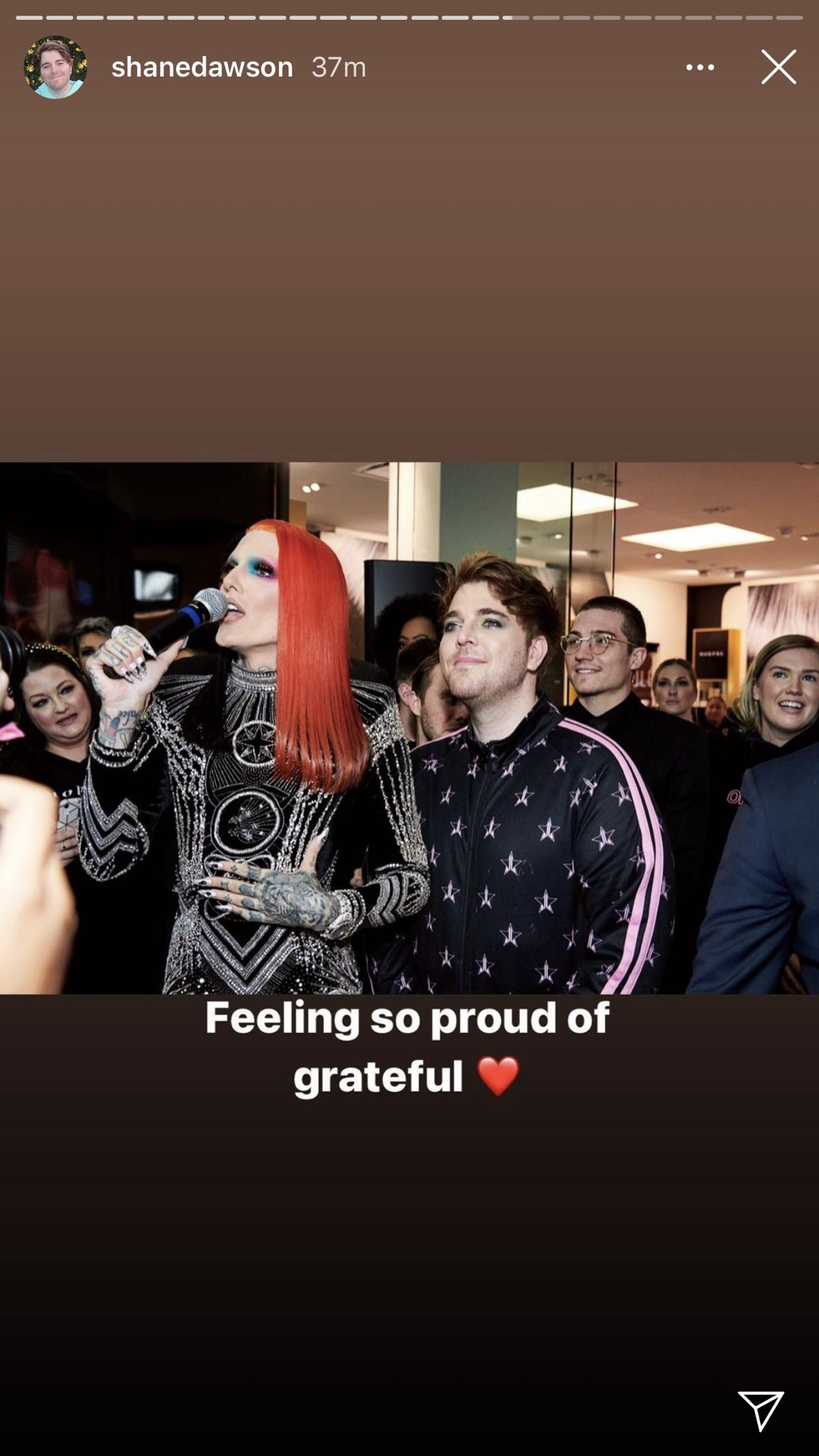 This is Shane Dawson feeling thankful and proud of the beauty products he made with Jeffree Star. 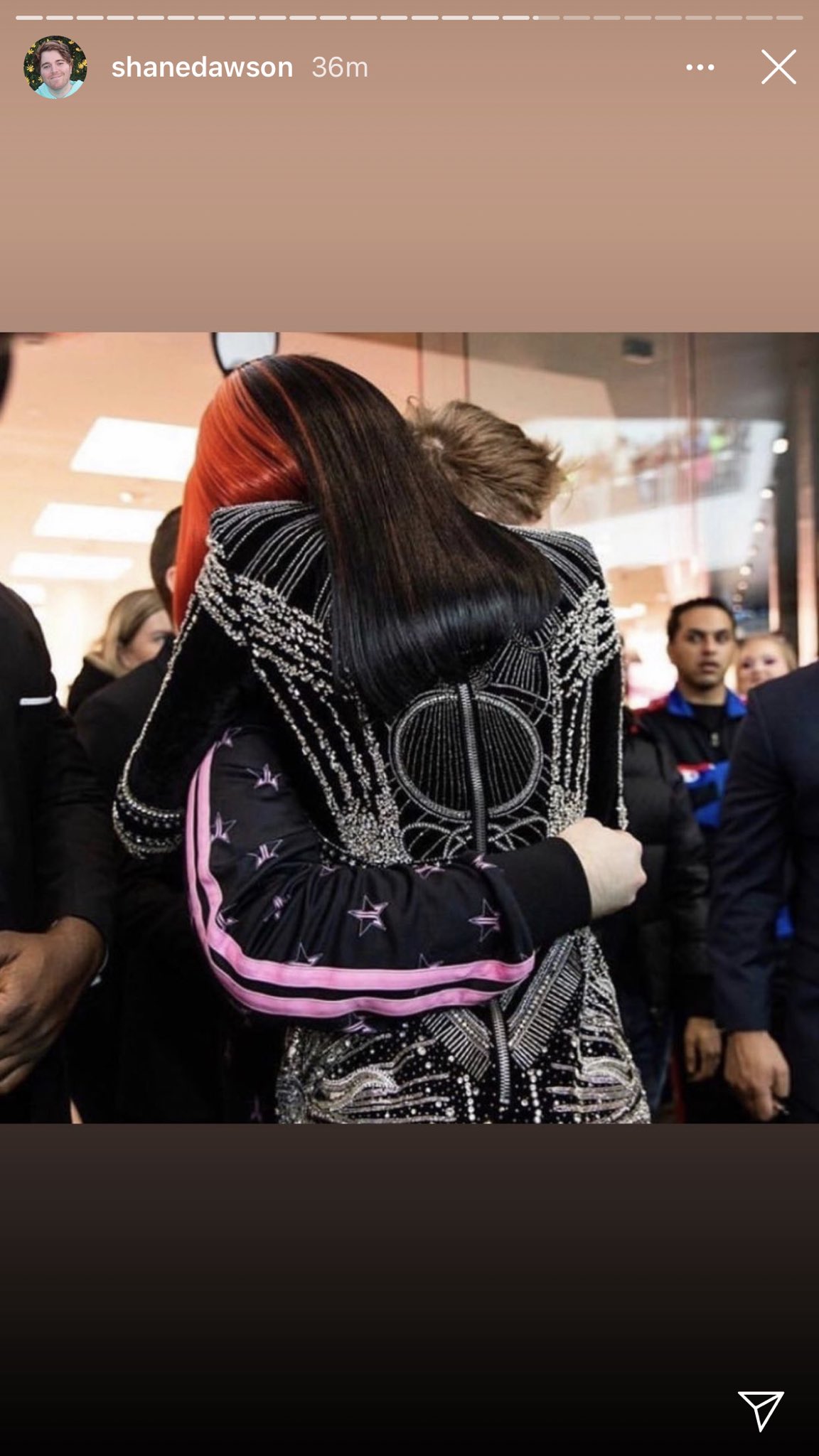 A candid moment of Shane and Jeffree hugging. 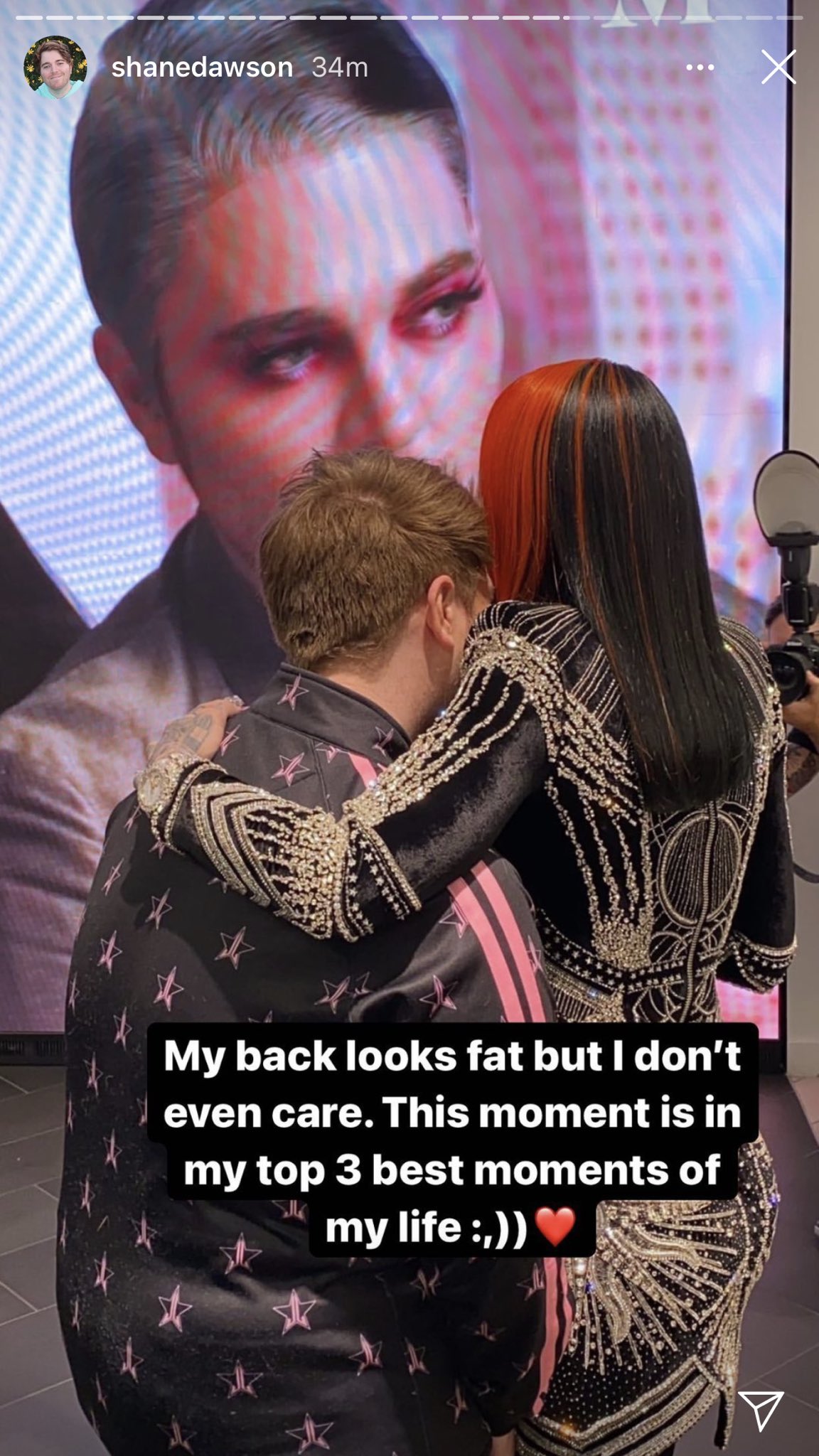 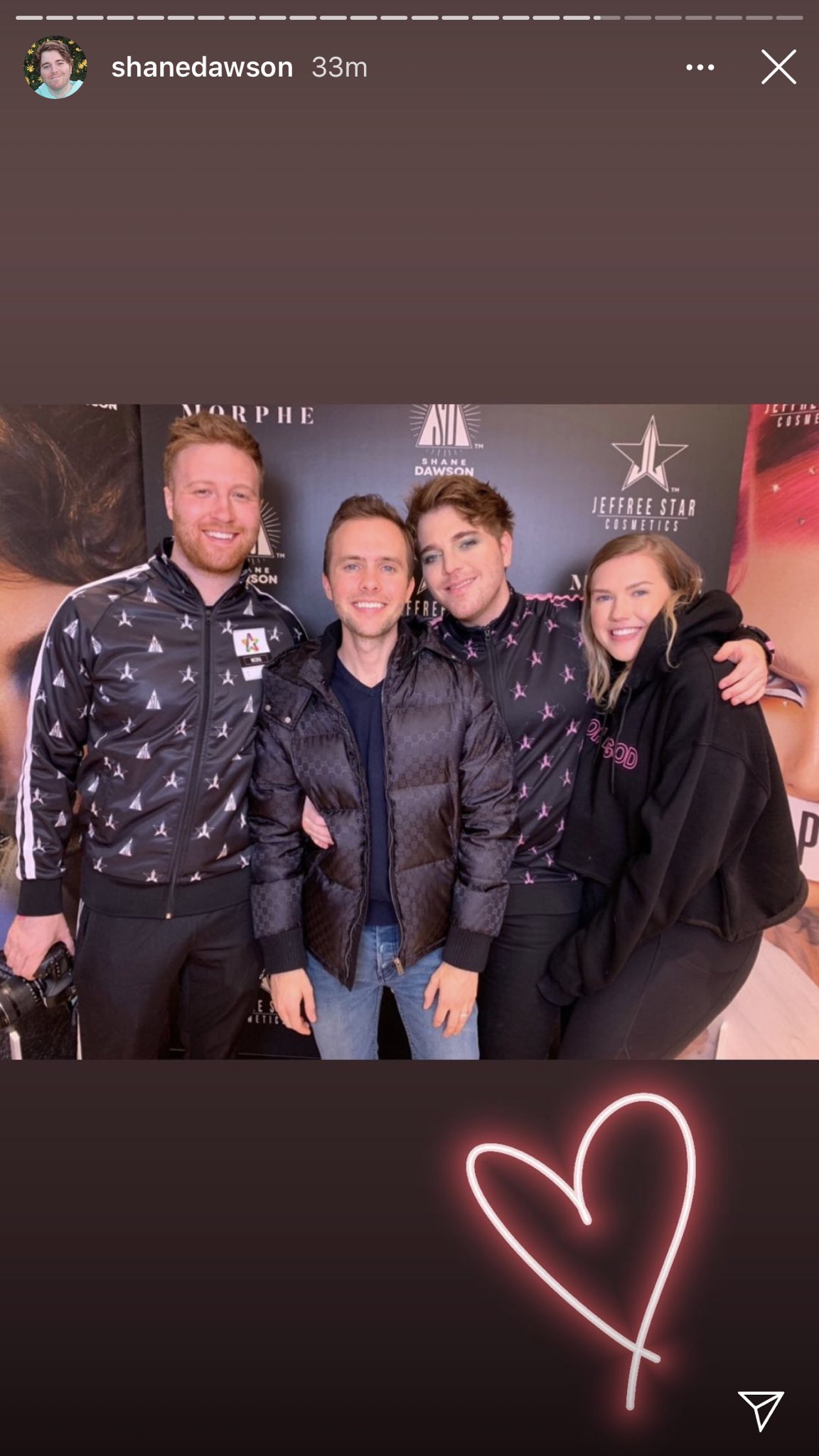 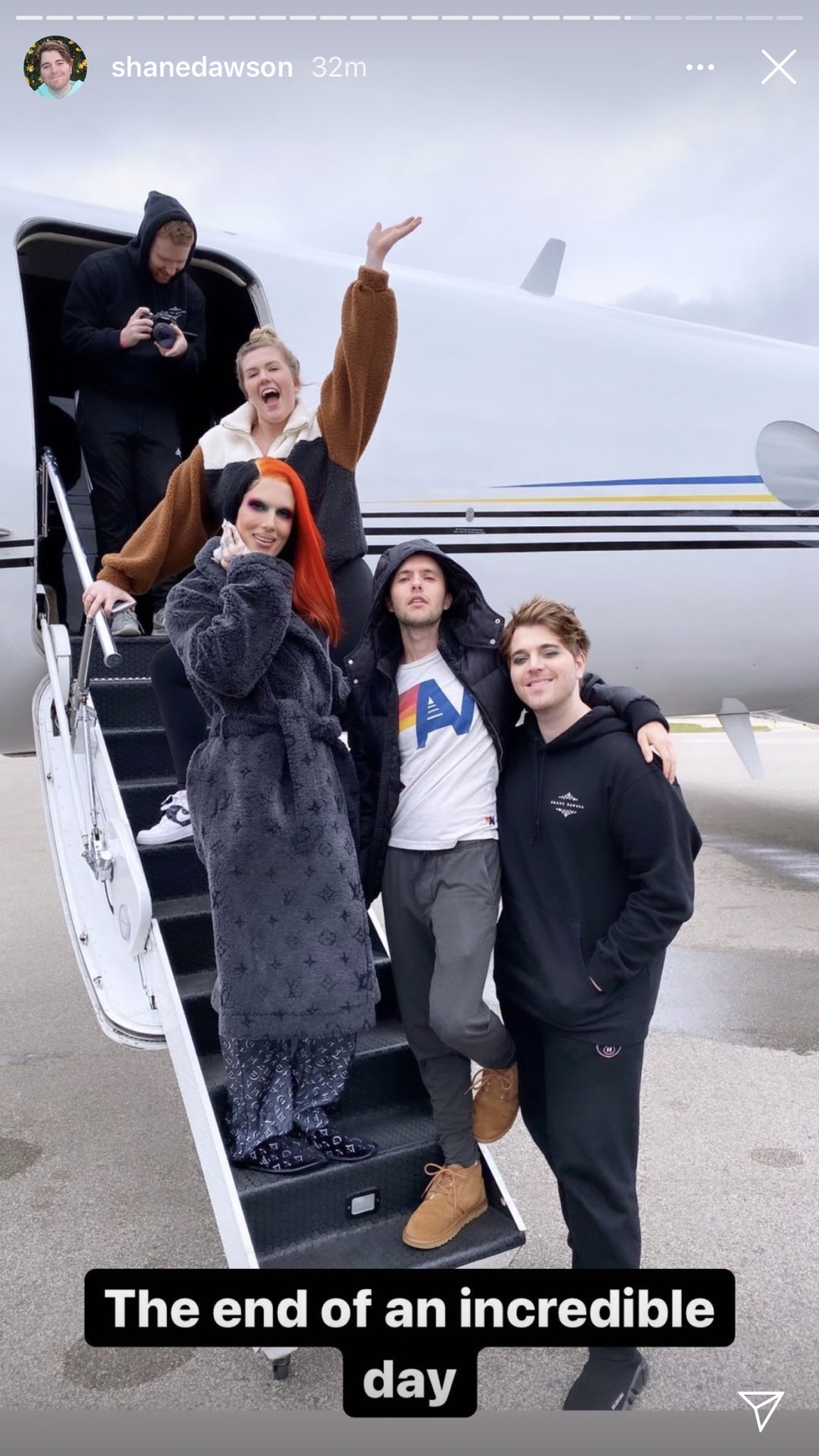 He posted a video of him first seeing the Conspiracy palette on his Instagram Live:

Shane Dawson also shared a video of him looking at the Conspiracy palette for the first time. pic.twitter.com/tDD5jbDbQY 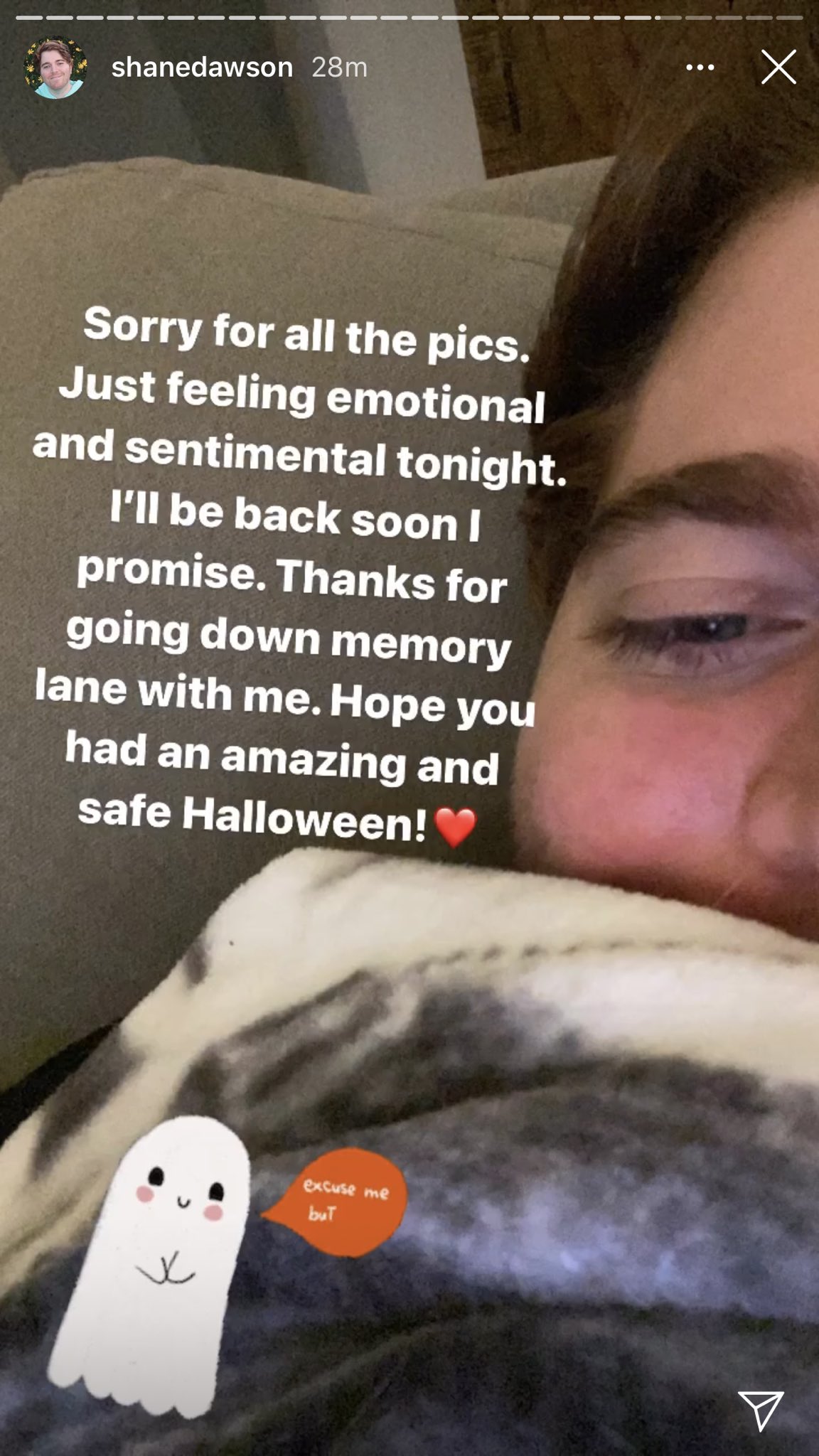 Shane Dawson also ended the story by telling everyone to vote

The YouTuber encouraged everyone to vote as well: 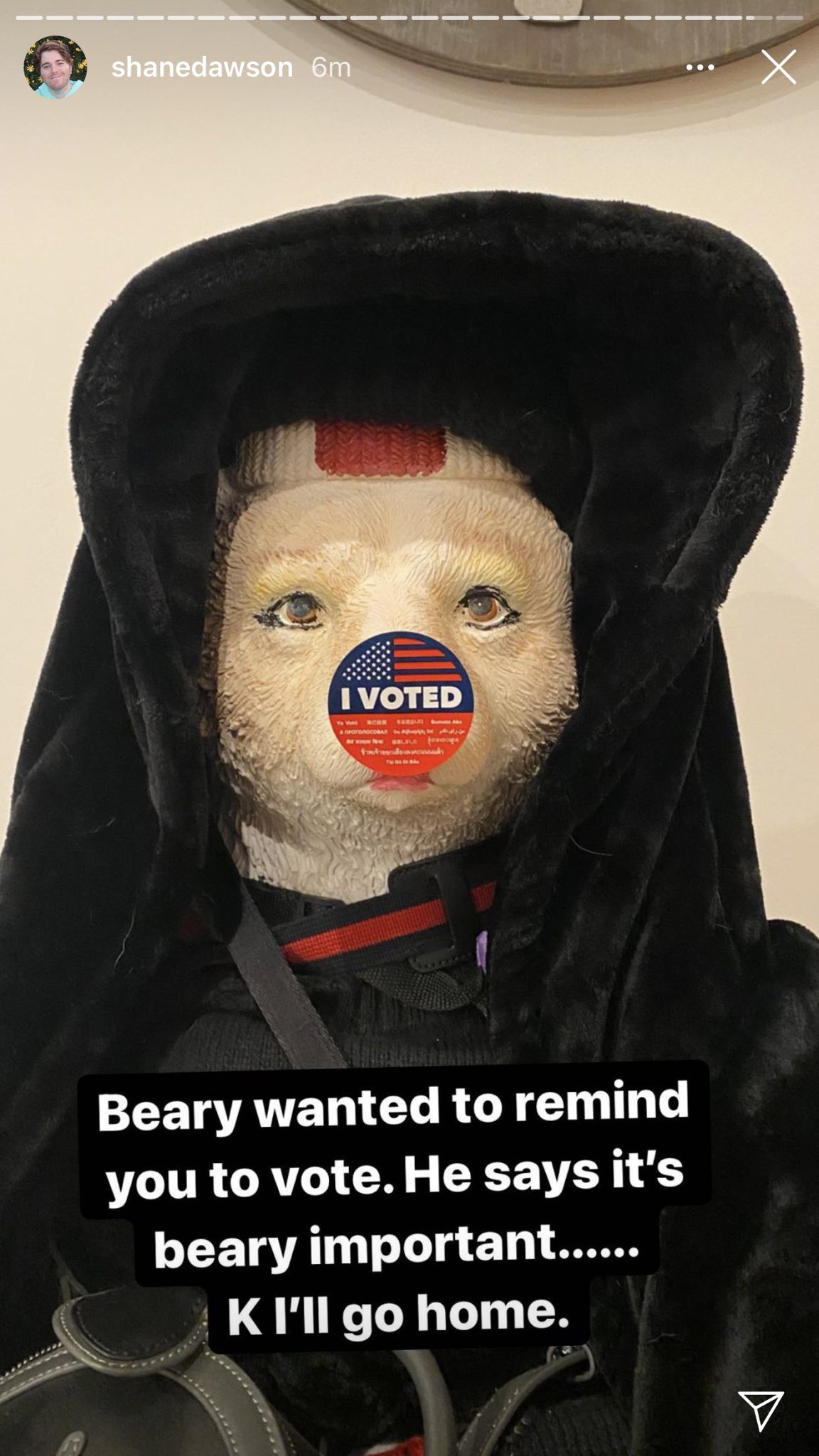 Shane Dawson didn’t specify a particular time in which he will return to YouTube and all his social media channels.

He previously returned to support his fiance, Ryland Adams on the launch of his new podcast. Shane has not addressed all the scandals and feuds which accuse him of making extreme inappropriate jokes on the subject of pedophilia and racism.

His makeup products were also removed by Morphe after the video of him pretending to do inappropriate things to a poster of an underage Willow Smith.

Let’s see when he makes a return and if he’s able to get his major following back. And whether he’ll do something in makeup again or not.