Zoe LaVerne is facing a serious scandal as she was found kissing her underage fan, Connor Joyce. She made an apology note on Instagram using an unofficial account. She admitted to making a mistake and apologized. Moreover, she said that she and Connor will go Live to explain everything as soon as ‘things calm down’. But she’s made a brief return via her mother and Connor has broken his silence too.

Zoe LaVerne cried on a live-stream

TODAY IN “WHO COULD’VE SEEN THAT COMING?”: Zoe Laverne cries on live stream with her mother. Several videos recently leaked where Zoe (19) was seen kissing 13-year-old fan. The fan Connor Joyce has since said he will address the situation—in thread. pic.twitter.com/eDUjomziKp

In the background, we can see a man (probably Zoe’s father) telling them to ‘shut it off’. But Zoe’s mother is insisting to come and say ‘Hi’ to her fans. Zoe LaVerne is crying with visible tears as she says a teary hi to her fans.

Her mother is also urging everyone to not ‘believe everything you hear on the internet’. Plus, she’s urging Zoe to ‘not cry’ and that ‘everything is going to be okay’.

At the end of the clip, we see Zoe LaVerne hugging her mother while still teary-eyed.

This comes after Zoe’s announcement that she is going to clear out everything by going live with Connor Joyce.

On the other hand, Connor Joyce also shared that he is going to address everything as well.

Connor Joyce, the 13-year-old who Zoe Laverne kissed and said she had feelings, recently said on a live stream he was going to address the situation soon. pic.twitter.com/DD5xaYvWke

People are angry at Zoe LaVerne

The clip of Zoe kissing Connor was found to be true as this is something Zoe admitted herself. She said that she did kiss Connor but realized it was a mistake.

Moreover, in her apology note, she also mentioned that she ‘caught feelings’ for Connor and it was something mutual between them. But both had mutually decided that it was not the right thing and they shouldn’t become romantically involved with each other.

Even though Connor is not angry at Zoe, many are convinced that he was abused and manipulated by Zoe LaVerne. 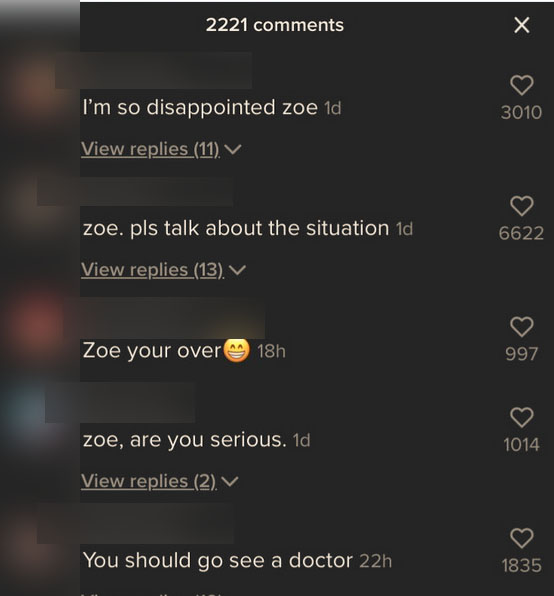 Many were completely shocked and angry at Zoe LaVerne’s actions:

Some were saying that Zoe would end up getting up with her predatory behavior because she’s a female.

Another critic was pointing out that Zoe LaVerne’s actions are illegal:

While all of this was happening, Zoe LaVerne ended up reactiving her social media accounts.

The TikToker  returned to SnapChat and she pointed outhow hate groups about her are not helpful.

The hate group was titled ‘Zoe Actually Slit Ur Wrist’, which is a very extreme stance to hold.

In another one of her social media posts, Zoe LaVerne announced that she’s going to start therapy:

She also announced again that she is going to address everything alongside Connor. Though, the two are not talking to each other right now.