The popular TikTok star Bryce Hall keeps getting involved in controversies these days. Recently, he was seen in a public brawl with a waiter. Popular YouTuber Elijah Daniel had a bit of fun and declared Bryce Hall as the ‘Karen’ of the Tiktok world. And this isn’t the first time Elijah Daniel called out Bryce’s problematic behavior. Daniel was calling out several influencers when they were partying during a pandemic.

So, what happened at the public fight of Bryce Hall

Bryce Hall was at a restaurant with some friends and he started to vape. Now, vaping is illegal in restaurants in Los Angeles. And as per reports by TMZ, the waiter asked Bryce Hall to stop vaping.

It is reported that Bryce Hall didn’t stop vaping and instead blew smoke right at the waiter’s face. As a result, the restaurant’s manager got involved. And they asked Bryce and his friends to leave by giving them the bill.

Things got heated and the restaurant’s staff and Bryce Hall got involved in a messy physical fight. It’s not clear who was the first one to throw a punch, but it is clear from the video that Bryce was fighting with someone. Sources say Bryce and his friends were the ones to start the fight.

Whilst leaving, a woman shouts at Bryce to ‘get the f*ck out of there’. To which Bryce hall responds, ‘Goodbye, Karen’.

That led to a response by Elijah Daniel

Elijah Daniel retweeted a video of Bryce Hall’s fight with a caption:

is bryce hall beating and putting a waiter in a chokehold because he can’t vape, the tiktok version of a Karen ?

‘Karens’ are usually a term given to white women that are really rude to the staff of the places they’re in. The official definition of ‘Karen’ is:

Karen is a pejorative slang term for an obnoxious, angry, entitled, and often racist middle-aged white woman who uses her privilege to get her way or police other people’s behaviors.

However, Bryce Hall has a different story

The TikTok star had a different story than the source at TMZ. Bryce Hall shared his side and stated that he was only ‘cordial’ with the manager when asked to leave. Though, when he was asking for his credit card back multiple times, he was simply told to ‘get the f*ck off the property’. As per Bryce, the manager was dragging him away. So, he had to put the manager in a headlock in order to defend his friends. Bryce Hall also shares the manager kicked him in the ‘nuts’ which led to an explosive physical fight. One of the restaurant’s staff members was injured so much that their hand was broken and bruises on their faces.

While we do not know the complete truth of the story yet, there is a possibility that Bryce Hall will prove everything he said with videos or pictures. There might also be security footage of the scene released which might tell us who really initiated the fight.

Elijah Daniel and Bryce Hall have a non-cordial history

Even if the recent fight had not happened, Elijah Daniel would still tell you he is not a fan of Bryce Hall.

When Bryce was throwing huge parties at the start of the lockdown and pandemic, Elijah Daniel was one of the first people to call him out. 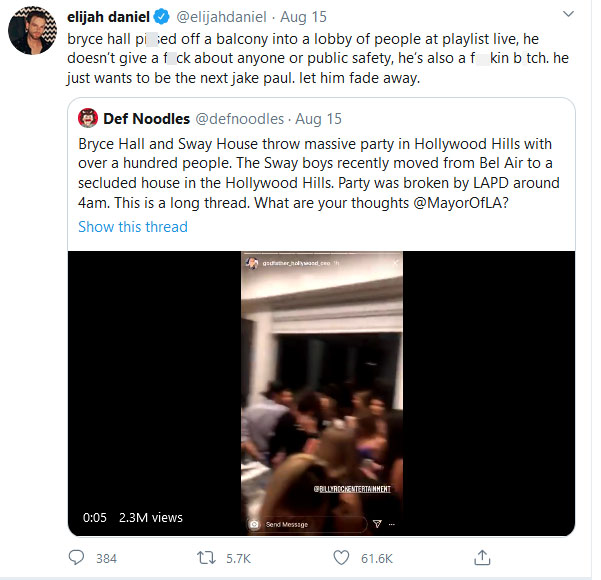 At one point, Elijah even called the authorities on these influencers that were throwing parties. One of them was Bryce Hall: 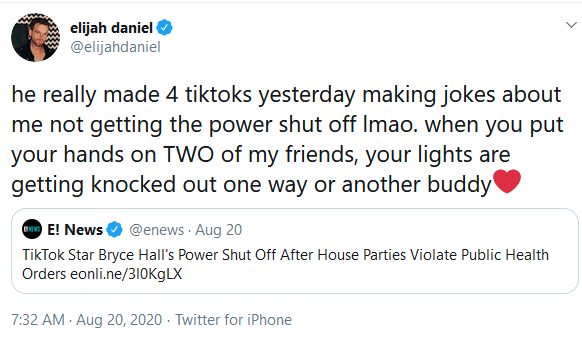 Elijah Daniel explains that Bryce Hall was making fun of  Elijah for not getting the electricity of his house shut down when he had said he would. As per Elijah, Bryce also had a physical altercation with a few of Elijah’s friends. So, their feud was something personal as well.

Ultimately, the mayor of LA did shut down the electricity of Bryce Hall’s house as then it was not allowed to have huge parties.

A few months have passed since then, Bryce did get the electricity back but his feud with Elijah Daniel still remains intact.

Bryce HallElijah Daniel
0 612
Share
Subscribe to our newsletter
Sign up here to get the latest news, updates and special offers delivered directly to your inbox.
You can unsubscribe at any time

Donald Trump & Joe Biden will have Mics muted in their Last Debate!