Larray just released a diss track ‘Canceled’ featuring his close friends, who he completely destroyed by his clever disses. But one of the major things fans are loving is the fact that Larray brought together James Charles with half of his old sister squad: Ethan and  Grayson Dolan.

Related: All celebrities Larray came after on his Diss Track ‘Canceled’

But first, a recap on the popular groups in YouTube ‘Sister Squad’

There are often some YouTubers that form friendships and often end up creating squads online when they collaborate together a lot. One of these squads was the ‘Sister Squad’. It consisted of James Charles, Grayson Dolan, Ethan Dolan, and Emma Chamberlain. They often collaborated together as a group.

Last year, a major scandal happened in James Charles’s life when he was canceled after his friend Tati Westbrook accused him of preying on straight men and of betraying her. As a result, many friends of James Charles distanced from him. Many didn’t want to collaborate with him either.

Fans noticed that Emma Chamberlain and the Dolan Twins weren’t following James Charles anymore. They assumed it was the end of Sister Squad.

Soon, James Charles cleared out the allegations that he was dealing with. And this year, Tati Westbrook even made a video taking back everything she had said.

Another thing happened in 2020. James Charles became friends with many TikTok stars such as Larray. Fortunately, Larray also happened to be friends with Emma Chamberlain. Eventually, Larray ended up reconnecting Emma and James together! Emma shared:

Larray came over to my house which was weird because I never hang out with anyone. He was saying that he filmed a collab with James where they prank called people. And I was like ‘why didn’t you prank call me’ and he was like ‘Emma you haven’t spoken to James in like a year’. I just didn’t even think of it like that anymore. Like it wasn’t like there was anything weird at all. It was just like we hadn’t spoken and we were just doing our own thing. And then he was like well, ‘We should call James’ and I was like ‘okay okay’. And then we called James and then James talked and then James came over we like hung out we talked and we caught up. I was like wait a minute I missed you sister and then he’s like I missed you and then we hugged each other.

But Dolan Twins have still not reconnected with Emma and James

On-screen, we know that the Dolan Twins have not hung out or collaborated with Emma Chamberlain or James Charles.

They addressed the Sister Squad a couple of months prior and shared this:

It wouldn’t be fair for us to talk about it unless everybody in the said squad had their opportunity to speak on their behalf.

The Dolan Twins also opened up about the fact they have not talked to Emma or James in a while. They had no bad words to say about them. And they did emphasize that following someone on social media (or not following them in this case) didn’t necessarily define friendship for them.

This seemed to imply that they were still friends with James Charles. It must be noted here that when James Charles was clearing up his allegations after Tati Westbrook made her first expose video, he mentioned the Dolan Twins. James said that the twins were one of the first people to check up on him.

One of the allegations around James Charles was that he was making Grayson Dolan uncomfortable with his flirting. By sharing that Grayson Dolan checked up on him, James was pointing out that what people were speculating about James and Grayson was not true.

Well, in the diss track music video for ‘Canceled’ we see a bunch of TikTok influencers and YouTubers sitting in a classroom. They’re here to learn about ‘cultures that are canceled’ in ‘Canceled University’. Creative, Larray. Very creative…

Anyways, we see Ethan Dolan and Grayson Dolan in the back seat of the classroom: 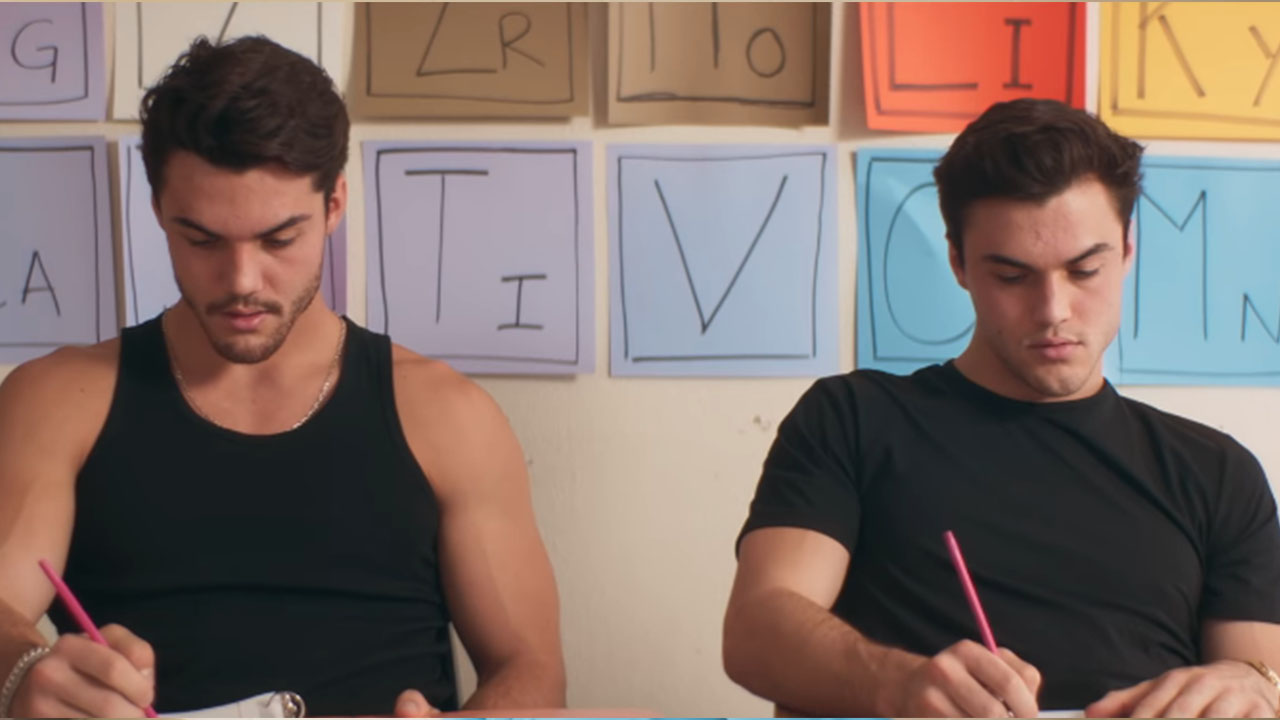 Meanwhile, James Charles is in the front row, sitting on top of a bench.

And then Larray utters these lines while James Charles looks down and smiles for a split second:

Then there’s this line:

And after Sister Squad, their channel went and flopped (Sorry)

With the upset expressions of Ethan and Grayson Dolan:

Yep, Larray shaded the Dolan Twins with a smiling James Charles scene between it! It seems like it was all shot in the same classroom. But it seems like they were filming on different days.

And to think, Larray went on the Dolan Twins’ podcast to talk about serious things in his life!

I love Larray, It’s all in good fun.

James Charles also shared that he would not be ‘getting back’ at Larray for making a diss track on him.

Emma Chamberlain was not mentioned in the ‘Canceled’ Diss track by Larray. But it may seem like the Sister Squad may get back together again. Emma and James are friends already. Larray is really good friends with the Dolan twins too, so it’s only a matter of time before they all meet in one place again.

What are your thoughts? Do you think they will get back together?