The past few months have truly tarnished Chris D’Elia‘s reputation. He was a pretty successful comedian and getting a lot of gigs as an actor. But, it all came crumbling down when multiple women accused him of sexual harassment and misconduct. What’s worse is that some of them were underaged at the time D’Elia made his advances on them. But, deep down he always knew what he did. However, we may have found the exact moment when D’Elia realized that he can’t get away with his crimes and will get caught!

Related: Chris D’Elia Responds To New Allegations Of Exposing Himself

As we all know, Chris D’Elia was really good friends with Bryan Callen and Brendan Schaub. He had appeared on their podcast The Fighter and The Kid multiple times over the years. The last time, however, something interesting happened. And when you look at it in hindsight, you realize that this was the moment Chris D’Elia realized he could get caught.

What happened was on the show, they were discussing an incident where Former Miss Kentucky was sentenced to 2 years in jail for sending a nude photo to one of her former students, who was underaged at the time. She sent those pictures to the boy over Snapchat. And that confused D’Elia a lot. Because he thought that the chats and pictures on Snapchat go away. D’Elia asked the host:

Wait, hold on a second. How did it come out? Like, how did they-?

Finding it, what do you mean? Snapchat goes away right?

At that point, the host told her that chats and pictures can be saved or screen-recorded on Snapchat. And the look on Chris D’Elia’s face completely changed. Take a look at it yourself: 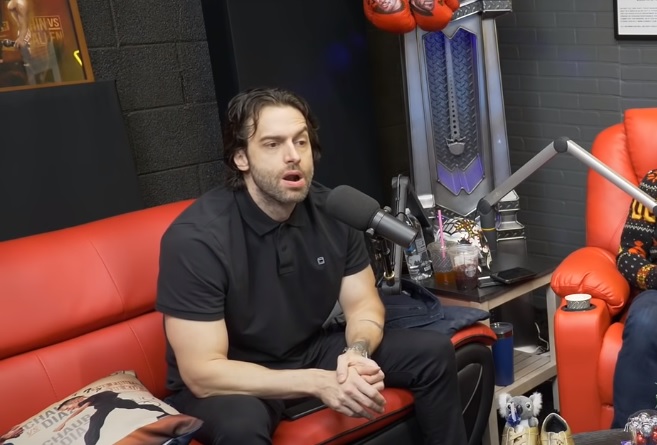 For your ease, here’s the podcast and it’ll start playing from 1:14.41 when they started discussing that news.

And we have to give credit where it’s due to the YouTuber who had a keen eye to spot this moment. Kudos to this person!

Related: What will happen to Chris D’elia’s Podcast now?

The first wave of allegations surfaced in June when multiple women claimed that Chris D’Elia sexually harassed them. Moreover, he made sexual advances to minors as well. Later on, in August, two women further accused D’Elia of exposing himself in front of them. His legal team did release email exchanges with some of the accused, but most of the alleged victims remain un-answered. Moreover, D’Elia’s legal team reaffirms every time that all his sexual encounters were consensual.

Ever since the allegations came to light, many of D’Elia’s friends and colleagues have called him out, including Whitney Cummings. Moreover, his career also took a strong downturn as his agency and the many projects he was working on, cut him loose.

Related: Joe Rogan Still Hasn’t Addressed Chris D’Elia’s Sexual Misconduct
Chris D'Elia
0 20,352
Share
Subscribe to our newsletter
Sign up here to get the latest news, updates and special offers delivered directly to your inbox.
You can unsubscribe at any time

Nessa Barrett stuns in If You Love Me music video

Lana Rhoades Boyfriend Alert | Who Is The Mystery Guy?