What happened to Azula after ‘Avatar: The Last Airbender’ ended?

Throughout the entire series, Azula was the most formidable opponent that Aang faced in Avatar: The Last Airbender. And as glamorous and methodical she was as a leader, her downfall was just as catastrophic. Everything was going in her favor. Her father Ozai, who proclaimed himself to be the Phoenix King, made her the Fire Lord. Azula finally got what she wanted. But, when Zuko and Katara came to fight for the Fire Nation Throne, the Azula they found was not the same methodical and calculating one he had always known. Instead, it looked like she was going through a mental breakdown. And so, Zuko was able to defeat Azula, with much-needed help from Katara, ultimately becoming the Fire Lord. But, Azula’s story did not end with Avatar.

In Avatar: The Last Airbender, Azula was a firebending prodigy ever since she was a young child. Her father Ozai always favored her over his son Zuko and even her grandfather, Fire Lord Azulon, praised her for her talents. Moreover, she had Ty Lee and Mai as her close friends and confidants. Life was seemingly perfect for her, except for her relationship with her mother. Ursa always adored Zuko, as she saw the kindness in his heart. However, Azula believed Ursa always thought of her as a monster because of her behavior and unkind words. And when Ursa disappeared when Ozai usurped the Throne, Azula never confronted those emotions. She buried them, and instead focused on becoming the ultimate firebender.

However, all that came bursting on the surface in the series finale of Avatar: The Last Airbender. And these emotions dictated her life after the show ended as well.

After Avatar: The Last Airbender ended, we first hear of Azula in the comic story The Search. After the last Agni Kai, Zuko took pity at her fragile state of mind. So, he admitted her into a mental institution. However, in order to find his mother Ursa, Zuko ends up needing Azula’s help. Using the opportunity, Azula escapes and goes to Ozai’s secret bed chambers, where she reads Ursa’s letters. In trying to gain leverage over her brother, she burns the letters, convincing Zuko that she is his only chance of finding their mother. And so, Azula joined team Avatar.

However, Zuko was unaware that Azula still had hallucinations of their mother, as she believed that Ursa was responsible for all the losses she faced in life. And so, Azula wanted to kill her. The two of them are finally able to locate Ursa, only to find that she traded her face with the Mother of Faces, the spirit Koh, to start a new life with the name Noriko. As Noriko, Ursa remarried and had a daughter, which drives Azula insane. She accuses Ursa of replacing her with her new daughter and tries to murder her. However, Ursa apologizes, realizing that she herself was somewhat responsible for what happened. 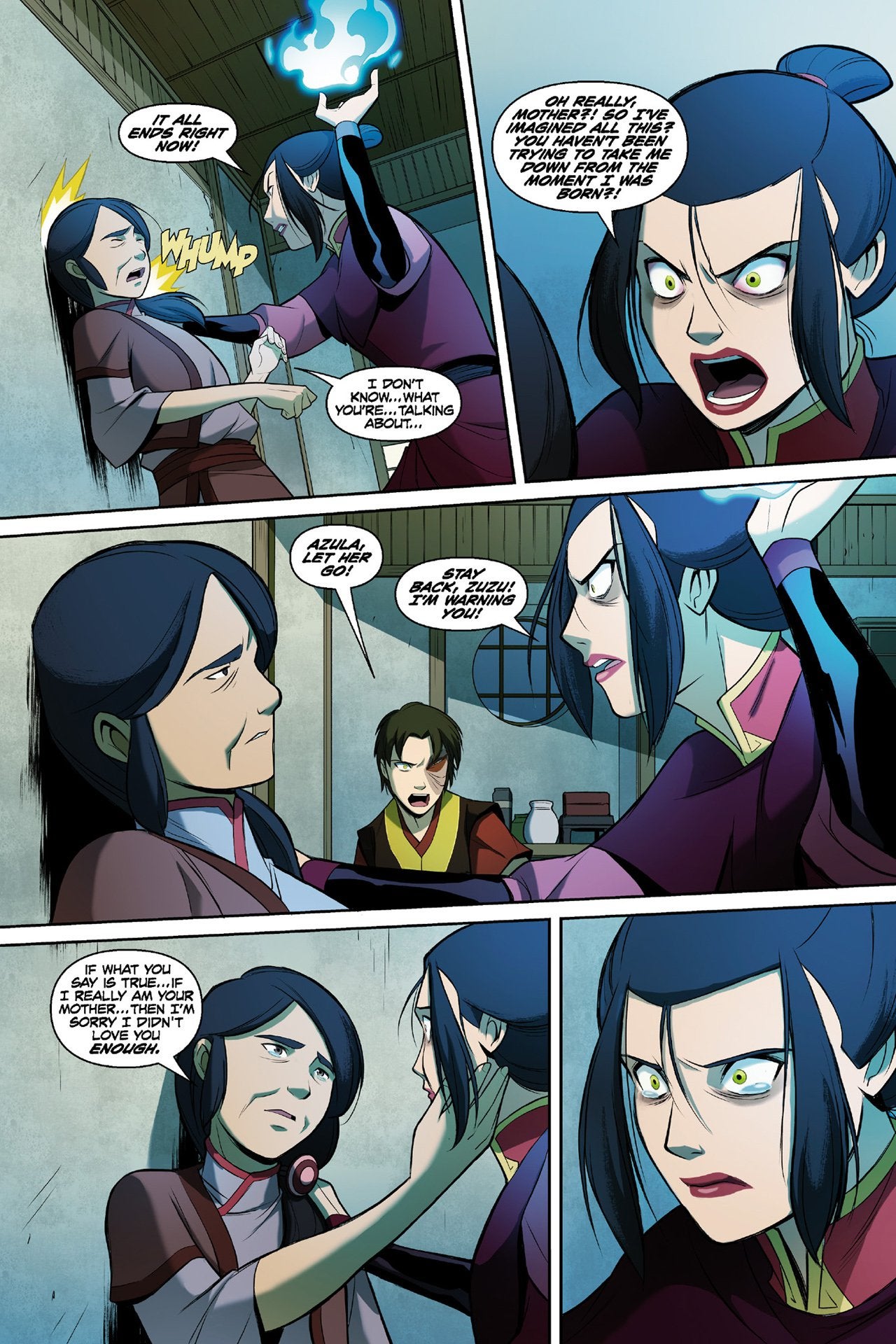 As Azula was distracted, Zuko intervenes. Azula taunts him that she will end up killing their mother, but Zuko reassures her that regardless of how complicated their relationship gets, she will always be his sister. After hearing that, Azula runs away, even though Zuko begged for her to stay and help him. That really shows how Azula, despite her methodical approach and ruthless mindset from Avatar: The Last Airbender, was only covering the cracks of an unfulfilled childhood.

Related: ‘Avatar’: Why no one on Ember Island recognized Zuko & Azula?

Interestingly, Avatar: The Last Airbender and The Search was not the last of what we heard from Azula. She reappeared again in the comic story Smoke and Shadow. Being the leader that she was in Avatar, Azula had freed many firebenders from her mental institute in The Search. After gaining some mental stability, she established a plan to mold Zuko to become a better Fire Lord by testing his leadership. She knew that Mai’s father was loyal to Ozai and wanted to depose Zuko. And so, she tries to manipulate public sentiments against Zuko and manipulates Mai’s dad to do her bidding.

However, she admits to her brother that she accepts him as the true Fire Lord. And that her destiny is to be in his advisor, but in the shadows. Even though her plan is extremely manipulative, just like her, her intension truly is to Zuko a better leader, helping him gain confidence in himself. That is some sibling love, but it’s still better than what we saw in Avatar: The Last Airbender. And by the looks of it in The Legend of Korra, Azula did succeed in her plan.

Related: Avatar: Where Did Zuko Get His Dragon In ‘Legend Of Korra’?
Avatar: The Last AirbenderPrincess Azula
0 2,098
Share
Subscribe to our newsletter
Sign up here to get the latest news, updates and special offers delivered directly to your inbox.
You can unsubscribe at any time

Ethan Dolan reveals his girlfriend to the world