So rumor has it that Lana Rhoades and Mike Majlak are not on good terms anymore because of Bryce Hall. The speculation comes from the fact that Lana deleted all of her pictures with boyfriend Mike from her Instagram. Except for this one picture in which she wished him ten years of being sober. But what’s even more confusing is that they just posted a vlog in which they are addressing all the cheating rumors circulating on the internet. Recently celebrity photographer Kevin Wong posted a video on his Youtube channel in which Bryce Hall is getting a little clingy with Lana. He also patted her hair twice. But that’s it. They both seem to be having a normal conversation in a drunk state. And then this rumor started circulating on the internet that Bryce was getting extra flirty with Lana Rhoades. Fans were quick to call them out on this.

So, every day we see tons and tons of videos shared on the internet by the celebrity news tabloids. And Kevin Wong, who is a celebrity photographer shares exclusive content about some Tiktok Stars and other celebrities every day.

Recently Kevin posted a video in which Bryce Hall is drunkenly chatting with Mike Majlak’s girlfriend Lana Rhoades. Lana was having dinner with a bunch of her friends at The Saddle Ranch. If you look at the video a couple of times, you will know that these two are way beyond tipsy.

Though I am not taking Bryce Hall or Lana Rhoades’s side, I cannot find any flirtatious thing in this video. Yes, Bryce patted Lana’s head twice. He shouldn’t have done that without asking Lana. But Lana didn’t even ask him to stop touching her head. Why? Maybe because she took it as a friendly gesture or didn’t notice it happening.

But a lot of fans started talking trash about Lana and Bryce. And they even tagged Mike in a bunch of videos and pictures which obviously would have upset him even more.

So he slid into Bryce’s DMs to clear things out. And Bryce on the other hand admitted that he was drunk and getting all touchy. But he was not at all getting flirty with Lana. 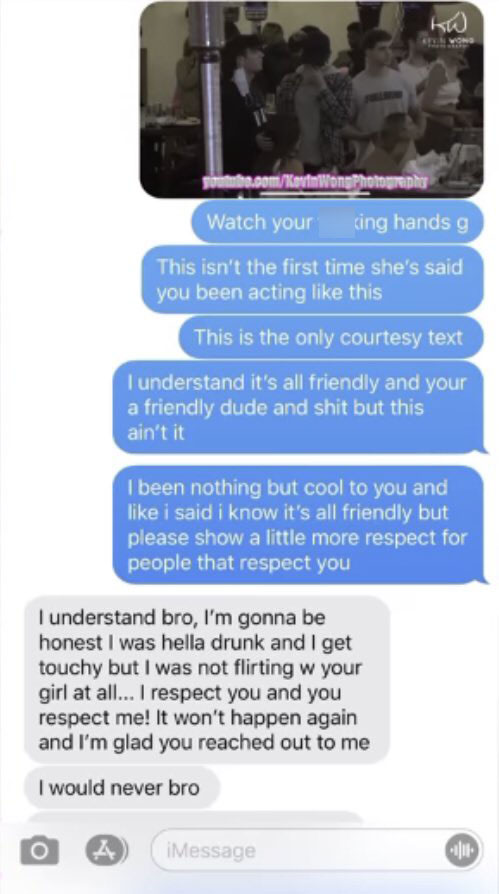 Lana Rhoades and Mike Majlak respond to the ongoing rumors

Mike’s girlfriend Lana responded to the Bryce Hall situation in a tweet:

“I ran into Bryce at a resturant, he bought drinks for my whole table of girls & invited us out on some friend sh*t. Period. My girls & I had plans already so we went somewhere else. Idk how this is even a thing.”

Some fans even said that Lana went to Bryce’s place after getting done with the dinner which is not true. And when fans started posting screenshots of Lana and Bryce getting a little close while talking at the Saddle Ranch. Lana posted two pictures in a now-deleted tweet.

The first picture is of Lana and Bryce who are clearly maintaining the one-foot distance. While on the other hand, Lana shared a screenshot from Keemstar’s drama alert video. In which Mike is giving a one side hug to a girl.

And after a little while, they both unfollowed each other from social media for a little while. But now they seem to be back on good terms. But Lana has deleted all photos of Mike from her Instagram instead of this one picture. Which is kind of fishy.

We never thought Mike would be cracking jokes while addressing the Lana x Bryce rumors. But let’s see what had to say about this whole thing:

“The internet is a blaze. Little kids making comments about sh*t they have no idea what they’re talking about. This week since there was paparazzi pictures and videos. Long story short Lana did leave me for a 5’6″ Tiktok Star.”

Mike and Lana were joking about this in a video and later clarified that Lana would not do such a thing.

Mike Majlak and Lana Rhoades address rumors she cheated on Mike with Bryce Hall. Mike says Lana would never leave him for a 5’6” TikToker.

What are your thoughts? pic.twitter.com/rJP2hBPDWw

“You touched my hair. Everyone was drinking. I don’t even know that i knew he was touching my hair. he solved all of this. i did not cheat on Mike. Mike might have cheated on me.”

Mike further talked about a very old picture of him which is circulating on the internet.

“Another pictures come out of a girl ho**ing me at a party that I went to a couple of months ago. So I guess that’s the thing about the internet. One little h*g will star the rumor mill going.”

Mike further joked that if Lana is going to leave him, it would be for a 7 feet tall basketball player rather than a TikTok star. Uhh oh, you did not just say that.

Anyways, we don’t really know the actual reason behind Lana deleting all of Mike’s pictures from her Instagram. But it seems like everything is okay between the two.

Related: Logan Paul Replaces Host Mac on Impaulsive because of Mike Majlak?
Bryce HallLana RhoadesMike Majlak
0 26,967
Share
Subscribe to our newsletter
Sign up here to get the latest news, updates and special offers delivered directly to your inbox.
You can unsubscribe at any time