Griffin Johnson has a meltdown after Dixie D’Amelio shared receipts

People get bored when there is no drama in the TikTok community. Every other day, they try to cancel someone by exposing them for something they did years back. However, when someone is exposed for recent events, can we call it unfair? Griffin Johnson cheated on Dixie D’Amelio and all we knew at that point was him asking for toe pics from girls. A few others claimed that there is more to the story but the internet was not aware of it. Recently, Dixie kissed Noah Beck in her Be Happy remix video, and Griffin dropped his debut song on both of them the same day. Since Dixie was recovering from her nose surgery, she avoided the negative sides of social media for a couple of days. But she clapped back after she got better, and Griffin is not ready for it.

Related: Dixie D’Amelio claps back at Griffin Johnson with ‘This you’ trend & receipts of cheating

Using Griffin Johnson’s own diss track titled Convenient, Dixie D’Amelio uploaded a TikTok. And that TikTok broke the internet as soon as it went on air. In fact, the ripple effect was more than what was expected of it. In the TikTok, Dixie has shared many receipts in the form of screenshots. These screenshots include Griffin Johnson asking more than the toe pics from random girls. 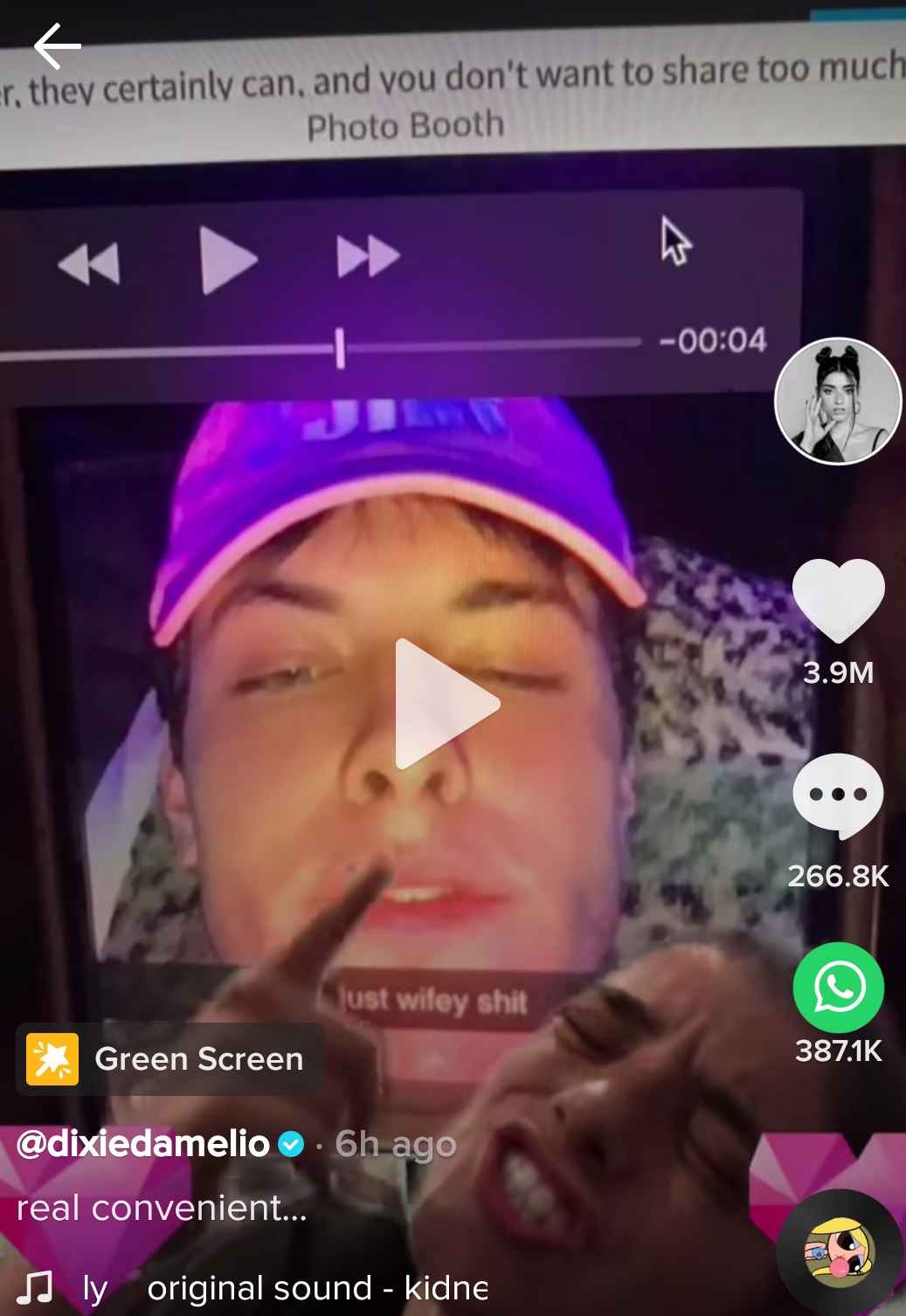 Some of the screenshots are not just the toe talks. 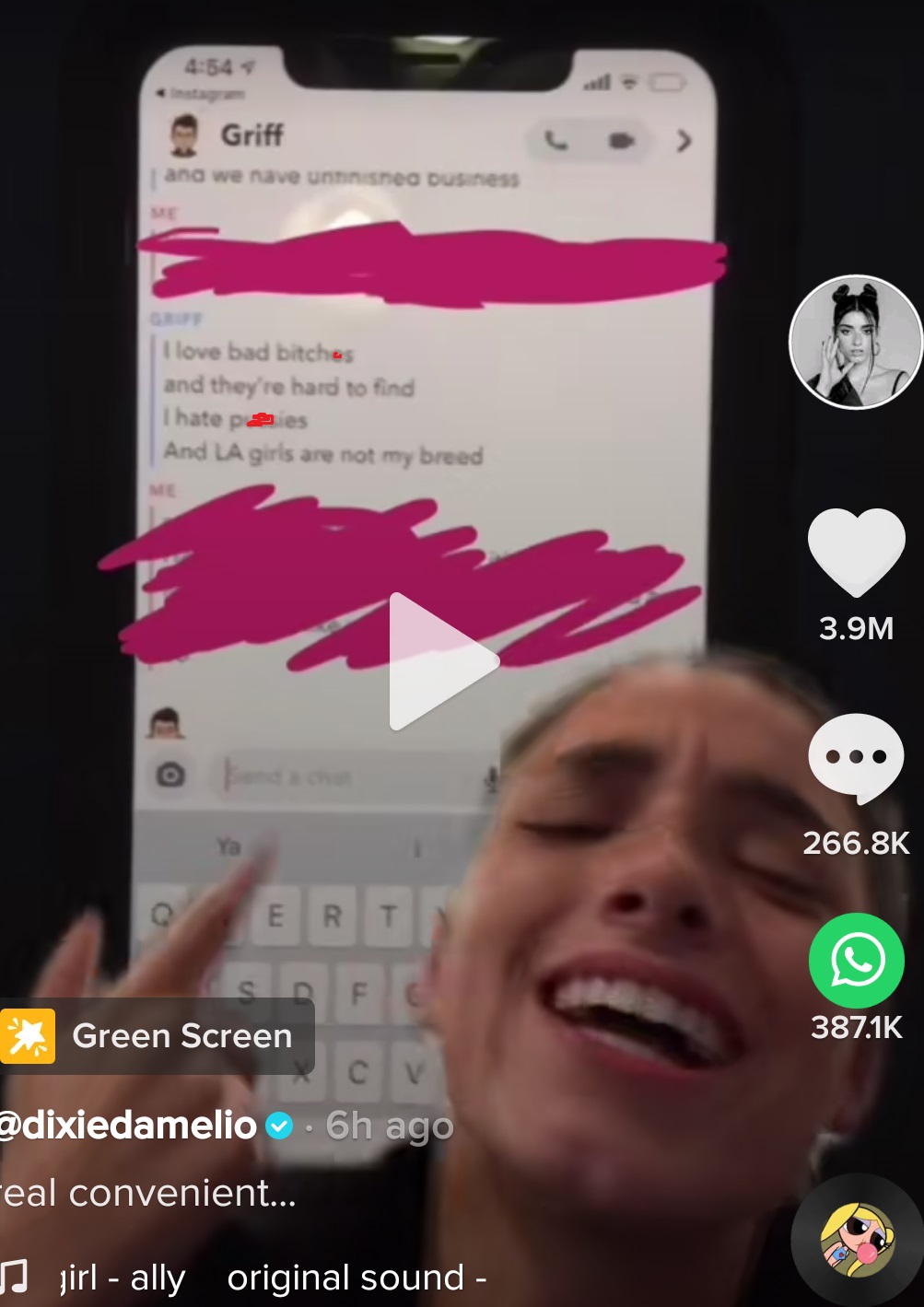 Sorry, what was that? 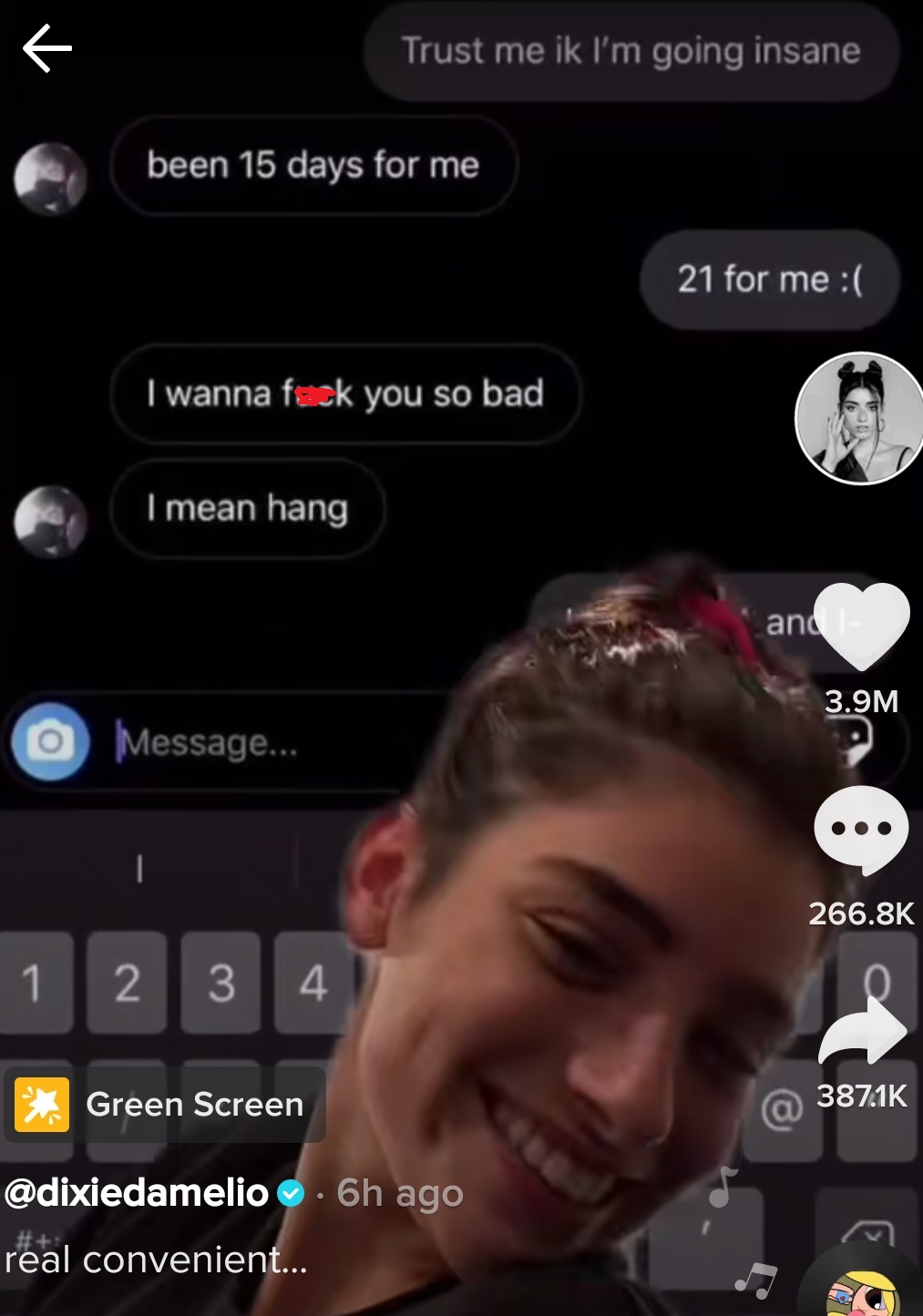 Real convenient indeed. Dixie D’Amelio also included a screenshot that seems to be an apology from Griffin Johnson to her. 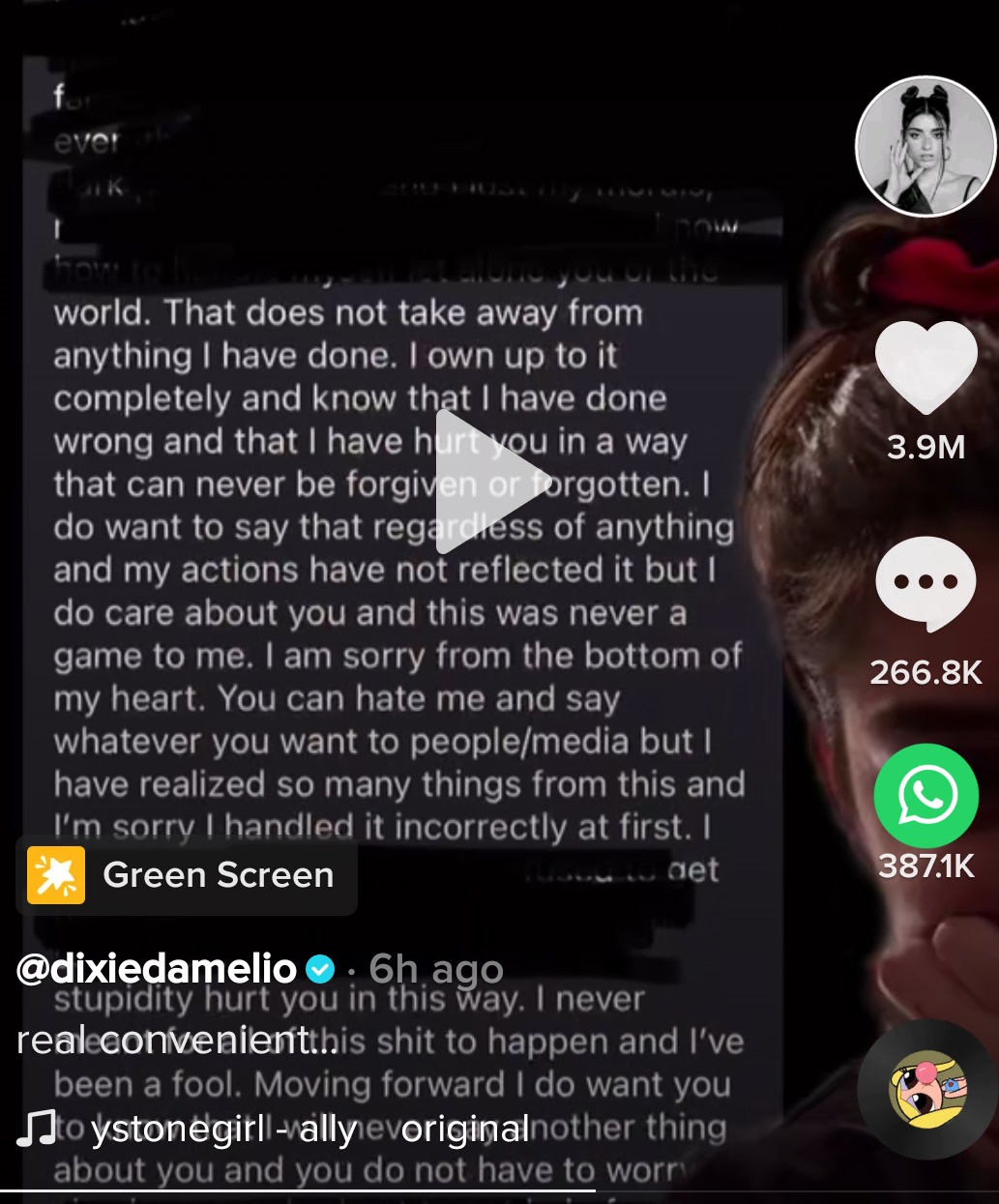 This was really awkward. After reading that apology you’d agree that Griffin Johnson himself gave a green signal to Dixie, to say whatever to people/media. But when she did, he was not ready for it. Or was he?

As soon as Dixie D’Amelio posted the TikTok, Griffin Johnson posted non-stop tweets. Many people were calling it a meltdown. He initially took back one of his recent tweets. Then, he shaded multiple people indirectly by saying that they edit pictures. 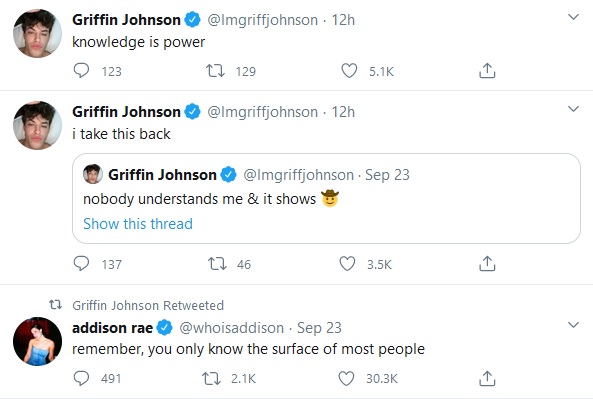 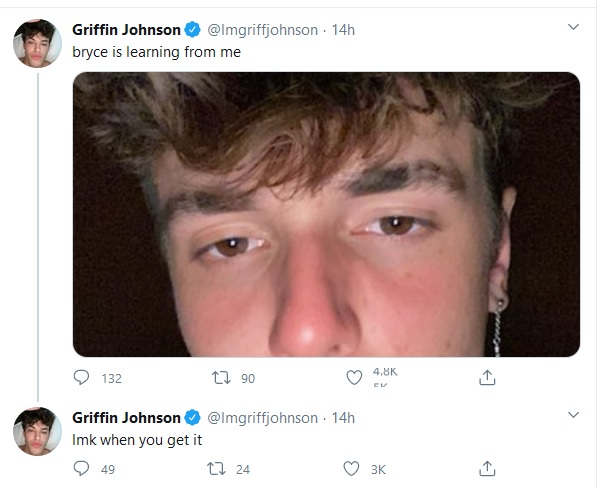 You can call it meltdown, rant or acceptance of his faults. 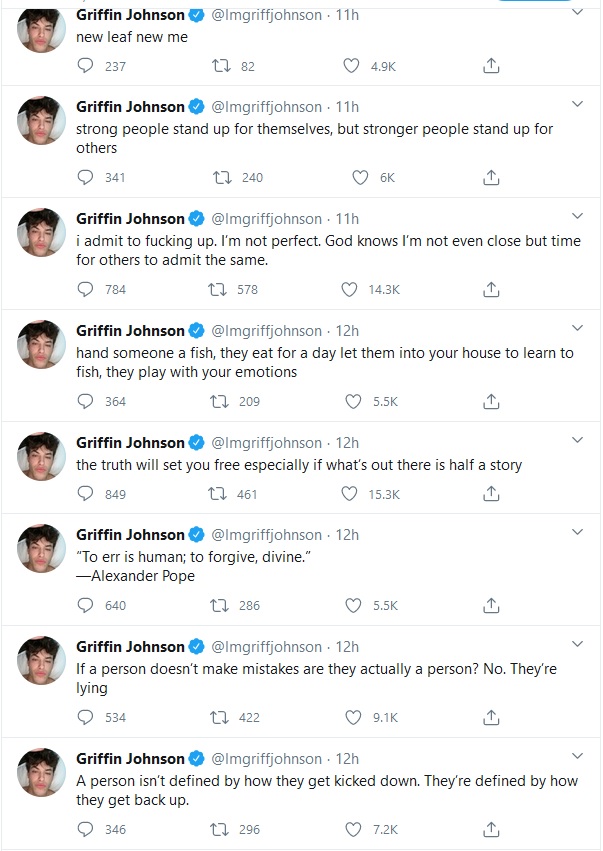 Griffin Johnson says all persons make mistakes. He cannot change what has been done. But he can learn from his mistakes and try not to repeat them again.

And as fans thought that Griffin is done posting, Blake Gray joined the tweet party.

Griffin threw another shade at Noah Beck as well. 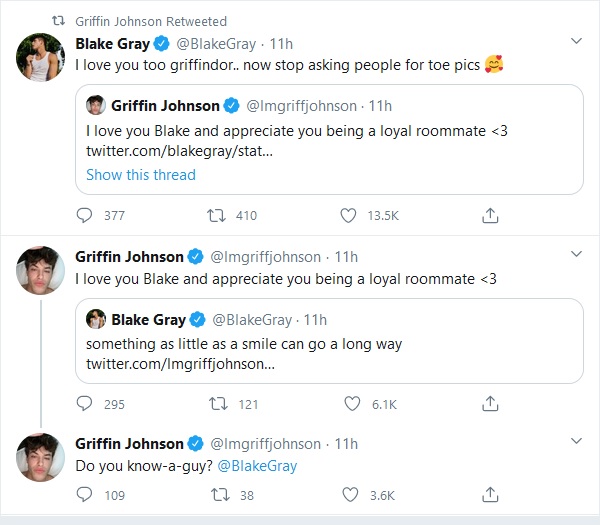 He called Blake Gray a loyal roommate, while shaded Noah indirectly by replacing his name with know-a.

Do you think Griffin Johnson will not post again after what happened in Dixie’s TikTok?

Related: Noah Beck flirts with Dixie D’Amelio non-stop in her awkward vlog
Dixie D'AmelioGriffin JohnsonNoah Beck
0 3,331
Share
Subscribe to our newsletter
Sign up here to get the latest news, updates and special offers delivered directly to your inbox.
You can unsubscribe at any time

Will Smith and Kevin Hart Invest in Pandemic Proof Startup