Danielle Cohn dropped her pregnancy and abortion bomb on her fans a few weeks ago. It was a huge mess back then, and it is still a huge mess at the moment as well. Danielle is dating Mikey Tua for the last 2 years in an on-again-off-again way. But currently they are going pretty strong. Last year after their breakup, Danielle dated Ethan Fair. Many people connected the dots and speculated that he was the one who got her pregnant. Turns out, these speculations were true as Danielle, Mikey Tua, her mother Jennifer Archambault, and even Ethan himself has now confirmed that Ethan got Dani pregnant.

The new dramageddon was triggered as a result of Ethan Fair liking a shady post about Danielle Cohn. The post was made by one of his fans, where the fan called Dani a cheater. In one of her recent videos, Danielle and Mikey Tua talked about how they kept their relationship a secret and how they were always in contact with each other. The video does not confirm that they were romantically involved during the breakup phase, but did confirm that they were in contact.

Turns out Ethan’s fans did not like this bit of information and they called out Danielle directly. They blamed her for cheating on him and affecting his health. Ethan did not just like this post made by his fan, he also addressed the issue indirectly on his Instagram stories.

Danielle Cohn claps back at Ethan Fair & he responds

Even though he did not take any names, Danielle Cohn knew he was talking about her, so she did not waste any time and commented on tiktokroom’s post of Ethan Fair’s IG Story screenshot. 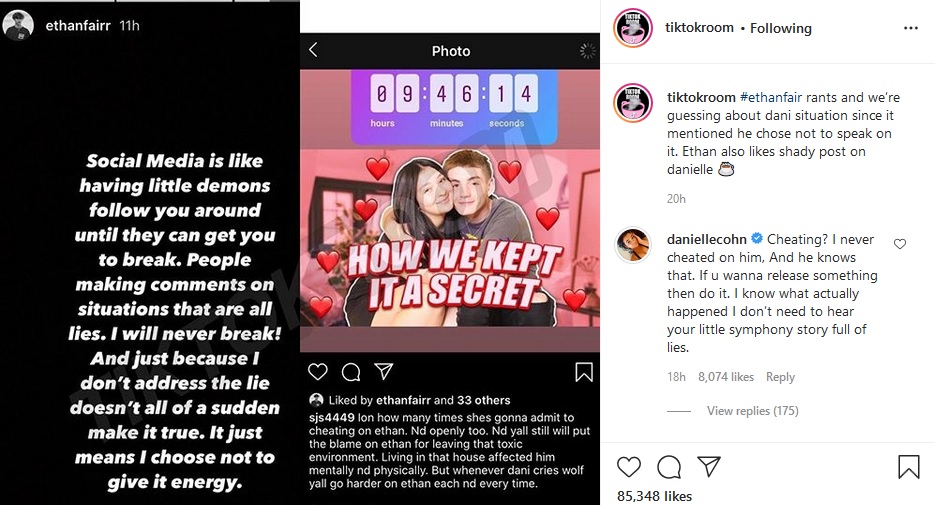 The tiktokroom is a famous “news” Instagram page that posts all the latest tea/updates related to TikTok content creators. In fact, content creators also interact and comment on their posts. While Ethan Fair addressed issues on his Instagram stories, Danielle kept commenting on tiktokroom.

After Danielle gave a green signal to Ethan to release whatever he wanted to release, Ethan Fair attacked Dani’s mother Jennifer Archambault.

There are speculations that Danielle Cohn’s social media handles are often run by Jennifer Archambault, her mother. Ethan fueled the speculation, gaining support from Dani’s fans that dislike her mother.

Exposing Ethan Fair as the father of the baby

In her abortion-confirmation video, Danielle Cohn did not confirm the name of the person who got her pregnant in the first place. However, she did confirm that the “father” of the baby left her on her own and did not want to do anything with her or the baby. She had to go through the abortion phase on her own.

People wanted a confirmation from Danielle, or a confession from Ethan Fair that it was him who got her pregnant. When Ethan threatened Danielle that he is staying silent because of her running “CPS” case, she exposed him as the father of the baby.

OH WOW😬. #daniellecohn confirms #ethanfair was the guy who got her pregnant and She says it’s sad ethan can’t own up to his mistakes 🙁

Danielle Cohn challenged Ethan Fair to come clean about the whole situation and own up to his mistakes. Beating around the bush was not an option for him now.

Assuming it was Danielle Cohn’s mother using her account, Ethan attacked her and asked her to give Dani her phone back. He also said that Dani is a sweet girl, which means he never had any issue with her. However, his Instagram story blames everything on Jen, Danielle’s mother.

In response, Danielle asked Ethan to stop bringing her mother. Jennifer Archambault, into everything. And she asked him to take responsibility of what he did. That is, got her pregnant. 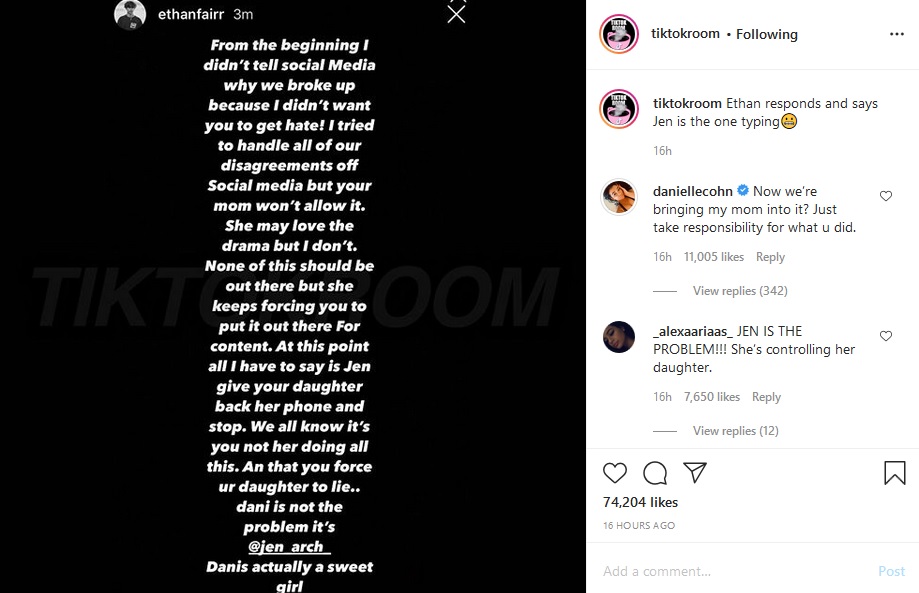 Mikey Tua went too far and attacked Ethan’s looks, which did not sit well with people on Instagram who were following the whole situation: 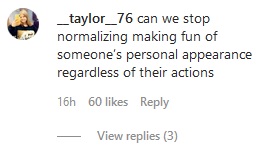 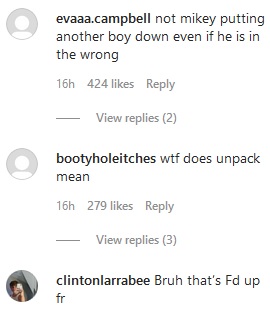 Fight between boyfriend and ex-boyfriend

After Mikey Tua got involved in the fight and attacked Ethan Fair, Ethan was not holding back to clap back at him. He called Mikey out on his age, and having a relationship with a 14 year old.

Danielle Cohn’s age has always been a controversy. Even though she accidentally revealed her real age, later she denied it and said that she did not confirm anything at all. Currently, Danielle and her mother Jennifer Archambault claim that Dani is 16 years old.

Mikey Tua was not holding back after getting accused of dating an underage.

Since the whole new dramageddon was serving as a hot tea for the curious minds on the internet, people were keeping an eye on Danielle Cohn’s mother’s Instagram account as well. She addressed the situation and called out Ethan Fair directly.

Before that, we all remember Jen’s friend Virginia who leaked the private conversation between Danielle and Jen about her pregnancy. Later, Virginia said that it was not Ethan as he was hospitalized at the time of Dani’s abortion.

So, in her IG story, Jen accused Ethan Fair for not accepting his responsibility. She said that Ethan Fair was not hospitalized at that moment, he was out. And he wanted Danielle to stay silent about his name because he did not want his parents finding out about the truth.

Wrapping up the drama

Ethan fair further straightened the timeline of the events, stating that Danielle did not ask for his opinion. (In her video, she said she did).  Ethan also confirmed that he was on oxygen in the ICU, and he could not talk much. He further added that Jennifer was also not there with Dani while she was getting the abortion.

#ethanfair says he was somewhere for a week and while he was there, Danielle called to tell him she was pregnant. Ethan says danielle then called him to tell him that she’s getting an abortion AND danielles manager went with her , and not jen. Ethan spills more tea and says danielle didn’t ask for his opinion or what he wanted to do also. ☕️

Ethan wrapped up his side of the story by stating that Jen and other lied to him about Danielle Cohn’s real age. He did not know she was 13, instead of 15.

#ethanfair says his name has been dragged by danielles fan base for months. Also says no normal person would post or address their daughters abortion publicly. Also ends it with saying she lied to his family about danielles age 👀☕️

Ethan further added that he will not address this drama ever again.

Ethan is done with the drama

Mikey Tua’s brother also got involved in the drama, to shut down the drama. He asked both Mikey and Ethan Fair to let bygones be bygones and move forward in their life. Jojo Tua further said that all the parties involved, including Danielle Cohn and the parents, should not focus on old sh*t. Instead, they should focus on something positive.

Mikey’s brother speaks out on the drama.😬

Last year, Mikey Tua said a similar thing after breaking up with Danielle Cohn. He said, her mother, Jennifer Archambault, lied to him about Dani’s real age and she is 2 years younger than the claimed age. That’s why his parents did not want him getting involved with a young teenager when he was about to turn 18 in a year.

After getting back with Danielle now, Mikey Tua has not openly addressed the “age” issue. However, he had a public feud with his family, and left his home to stay with Danielle.

Danielle Cohn stopped responding to the situation after her initial comments, as her new song was getting released. Is this the end of the new dramageddon? Only time will tell.

Danielle CohnDramageddonEthan FairJennifer ArchambaultJojo TuaMikey TuaTiktok
0 2,727
Share
Subscribe to our newsletter
Sign up here to get the latest news, updates and special offers delivered directly to your inbox.
You can unsubscribe at any time