KJ Apa, the famous Archie Andrews from the Riverdale series, is done staying silent about his love life. The flame-haired jock is literally turning up the heat on his Instagram when he shared a few pictures of his girlfriend, Clara Berry, on Instagram. In fact, these explicit images have also confirmed the rumors of their relationship. Clara has also shared the same pictures on her Instagram account as well.

Archie Andrews fans have been waiting for this news from last few months. In February 2020, KJ Apa went official with Clara Berry when he shared an intimate picture with her. The image was captioned as : Coup de foudre, and that means a sudden unforeseen moment. 2020 might have had us all on our toes since its beginning. However, it also brought KJ Apa and Clara Berry closer.

The same picture is not available on KJ’s Instagram anymore. Many fans are speculating that KJ Apa likes to keep the things low-key and private. Probably that’s why he removed the picture. In fact, fans are also speculating that KJ will remove these explicit images of Clara Berry soon. He captioned the pictures as “there’s nowhere else”. Hence, confirming his relationship with Clara Berry.

Clara Berry is a French Model, and she has done some campaigns for Fendi and Adidas. Previously, KJ Apa opened up to Cosmopolitan, confirming he is just waiting for the right girl and right time. Considering he had time in 2020 so far, KJ worked on his relationship with Clara and the fans are glad to know it’s going strong.

After KJ posted the explicit pictures of his girlfriend, many fans have started demanding to post his own explicit images as well. KJ’s co-star Camila Mendes has also commented on the picture: 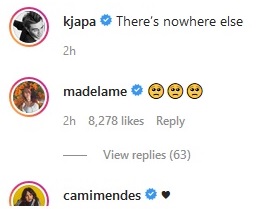 Whereas; Clara Berry was direct to express her love for KJ Apa.

JTM is a French term Je t’aime that means I Love You.

Related: KJ Apa Of Riverdale Criticized For His Silence Over BLM
Clara BerryKJ Apa
0 690
Share
Subscribe to our newsletter
Sign up here to get the latest news, updates and special offers delivered directly to your inbox.
You can unsubscribe at any time

All Celebrities Speaking Against Ellen DeGeneres Amid her Scandal