Just when we all thought there will be a break in the controversies revolving around Danielle Cohn, there comes another one. Danielle is one of the youngest TikTok stars and internet personalities. Her age has always been an issue because of the different statements provided by her parents. Danielle lives with her mother Jennifer Archambault and brother Chad. Her boyfriend Mikey Tua is also living with her now. He has a dedicated room in her house, as well as a vacation house in Florida. In fact, Danielle bought that house for him on his 18th birthday. Well, coming back to the issue at hand, Danielle accidentally revealed her real age during a live stream and the fans are shocked. They are so shocked that they believe her mother Jen will not be happy at all.

Danielle Cohn recently turned 16 on March 7, 2020. Her claimed date of birth is March 7, 2004. There were sweet 16 cakes on her birthday. Apart from that, Danielle and Jennifer have confirmed her age to be “16” various times. When her father Dustin Cohn came forward with receipts of Dani’s real age, he was shunned by both Danielle and Jennifer. In fact, they made a whole video with the purpose of exposing Dani’s father. Whether Dustin was a good father or not, that’s a different topic. However, seems like he never lied about her age.

We all know how Danielle recently confessed one of her biggest secrets when her aunt leaked an audio conversation confirming her pregnancy. Danielle Cohn was pregnant, and she had an abortion in January 2020. They kept denying the truth until the audio was leaked. Instead of calling it a morphed recording, Danielle came clean about it and confirmed that she really had an abortion.

Following the audio leakage, many fans criticized her mother Jennifer for not being a “true mother” to her. Danielle Cohn confirmed she loves her mother, and that no one should be the judge of their relationship. Jennifer is a momager, and allegedly she is always behind Dani’s controversial videos. However, apparently she was not present when Danielle went live and leaked her age accidentally.

What happened was, Danielle Cohn was apparently live on her Instagram, answering questions of her fans while getting ready. Someone asked if she wants to have kids with Mikey Tua, her boyfriend. In response, Danielle said:

Either she spilled her actual age as 14, or she is not that good at subtraction (doubtful). Here is the clip from her live, shared by tiktokroom on Instagram.

#daniellecohn talks about having kids with mikey in the future, etc!👀

Even though the caption focused on “having kids with Mikey”, the comments are filled with Dani spilling her real age.

Related: Loren Gray claps back at Danielle Cohn on Instagram

Someone commented on her latest IG post as well, asking her if she is really not 16. In response, Danielle Cohn said she is. However, when the same person reminded her of her live stream, Danielle did not respond….yet. 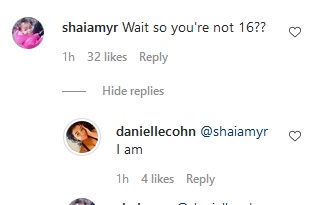 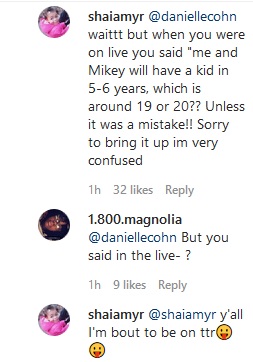 Fans are also speculating that Danielle Cohn’s mother Jennifer Archambault will not be happy with the recent turn of events. She will most probably make an excuse and blame her for being bad at mathematics.

Last year, Mikey Tua broke up with Danielle Cohn after stating that she is too young for him. However, they reconciled this year and have been dating since then. They both have not addressed the accidental-age-leaking incident yet. We will keep you posted.

Related: Ethan Fair confirms he will not expose Danielle Cohn & “the lies”
Danielle CohnJennifer ArchambaultMikey Tua
0 4,514
Share
Subscribe to our newsletter
Sign up here to get the latest news, updates and special offers delivered directly to your inbox.
You can unsubscribe at any time

Netflix Drops The Curtain On ‘Patriot Act With Hasan Minhaj’

Dobre Twins Get Backlash After They Do a Suicide Prank

Pete Davidson Jokes About His Adventurous Love Life on SNL