An allegation against James Charles is being circulated on the internet by TikTok star Ethan Andrew. The alarming thing is that the TikTok star is actually just 14 years of age. On the internet, the age is written as 15 but that’s still underage. Apparently, this time there are attorneys and authorities involved.

What does Ethan Andrew say about James Charles?

He accuses James Charles of sexually harassing him via online chatting platforms. He shared receipts in a now-deleted YouTube video where James Charles sent him explicit pictures and videos of himself to Ethan.

Here’s what Ethan wrote in the video:

My name is Ethan Rhett, I am a 14 year old boy from Dallas, Tx. Me and James Started off as friends then he got ocmfortable sending me n*des, after several times of me asking him to stop. He knew I was 14, but because I was young he thought he could take Advantage of me and control me, and every time I refused to do what he wanted…He threatened to “out” ME.

Some fans were quick to grab screenshots and shared that something is a bit off in the screenshots. The messages by Ethan have been deleted.

Def Noodlez shared that he downloaded the original video and in it, there are no receipts of James Charles knowing Ethan’s actual age:

Later on, Def Noodles has this to say on the matter:

Many people are skeptical over believing anything right now. However, Ethan Andrew does respond to his age. People are wondering if Ethan did actually share his age with James Charles or not.

Ethan Andrews says his age is all over the internet

The TikTok Star says although he doesn’t have the receipts, his age is visible to everyone on the internet.

“My age is on the internet I am a public figure. I have 350k followers on TikTok. I have a fanbase. He knew my TikTok, I have little girls commenting on my TikTok I have no facial hair. I don’t look 18 years old.”

James Charles’s 14-year-old alleged victim Ethan Andrew responds to speculation he did not share his age with James Charles by saying his age is publicly available on Famous Birthdays, since Ethan has 350k followers on TikTok. Ethan adds attorneys and police are involved. pic.twitter.com/rXU6QAfw0L

Def Noodles found this on the internet: 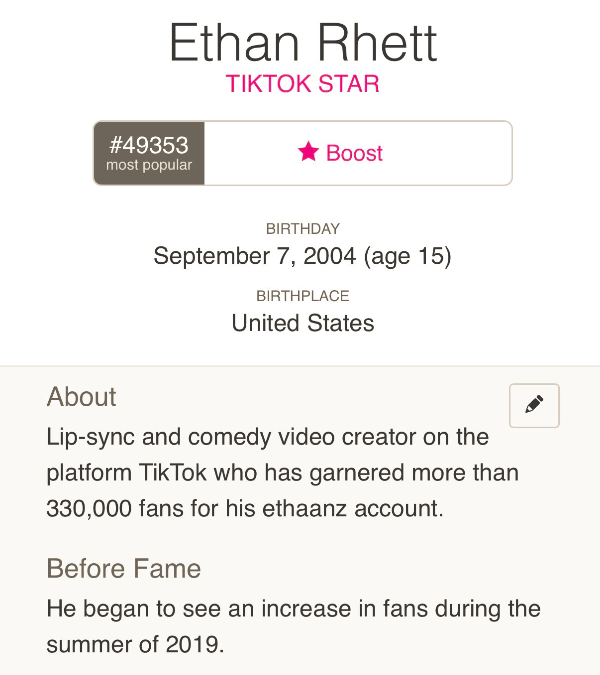 Ethan says that he felt stuck in that situation:

He took it too far. I didn’t know what to do. I was stuck in a position where I didnt know what to do. So for everybody saying, ‘Oh, where’s the receipt saying you were 14 years old?’. I don’t have it. I don’t have the receipts. At the time, I wasn’t thinking. I started feeling uncomfortable and I thought I would have to come out to the public with this whole situation. Because there might be kids out there my age this has happened to.

Ethan claims that he is going public with this story because he feels there might be other victims of James Charles out there.

The authorities are involved

This kind of predatory behavior, if true, should not be punished by just canceling the perpetrator but them getting actual punishments for their actions.

James Charles has not yet responded to these claims.

James Charles has been accused before but there was no evidence

That was the cause of the major dramas in the beauty community last year. Tati Westbrook claimed that James Charles manipulated straight boys into doing inappropriate things with him. Later on, Jeffree Star got on the bandwagon and came up with stories by straight men he knew who were going to expose him. However, James Charles did show all the receipts and said there was nothing inappropriate going on with anyone. When he did make some boys uncomfortable with his texts or things he said, he apologized to them personally. That’s what James Charles claimed in ‘No More Lies’ video last year.

This year, Tati Westbrook seconds what James Charles said and claimed she was ‘fed lies’ by Jeffree Star and Shane Dawson. She said they were going to provide proof of James’s predatory behavior after she uploaded her original ‘Bye Sister’ video. But when Tati uploaded that, they did not come up with any substantial evidence. Later on, she exchanged information and receipts with James Charles and discovered that she was manipulated by Jeffree and Shane.

There was speculation that Jeffree Star has proof of his predatory behavior. Blaire White claimed that she heard the audio of an alleged victim of James Charles. But she did not know the truth. All she knew was Jeffree was manipulating her and many others in the YouTube community. When this drama was unfolding Jeffree Star took a social media break. Recently, he addressed the issue and just merely apologized to James Charles and said he isn’t going to partake in drama anymore and not going to expose anyone either.