Well, another update has just happened in the beauty community drama saga. The major players that are under fire are Jeffree Star and Shane Dawson for allegedly instigating Tati Westbrook to cancel James Charles. Not only that but Jeffree Star is dealing with a lot of multiple dramas from his past where his problematic behavior is being brought up. He took a break from YouTube for a while and didn’t post anything on social media. Then recently, he made an apology video. The apology video didn’t do him any favors as people didn’t think it was proper or sincere. Many have lost their trust in him but he’s still staying strong amid the drama. Today, Jeffree Star posted on his social media about his thoughts on everything happening around him.

Jeffree Star addresses the issue of people talking about his money

If you have lately seen Jeffree Star’s Instagram account, it’s mostly pictures of him with Louis Vitton branded items.

Many people were hating on him in the comments section, especially highlighting how he’s showing off money. Some were pointing out how he should use that money to help those in need and some even mentioned that he should donate to the BLM movement.

Later, on his Instagram and Snapchat Stories, he vented on how he was feeling. Indirectly, he addressed the comments and shared that people are too focused on others these days:

Perhaps, he’s indirectly telling people to stop fixating on him showing off his wealth.

We all know 2020 was bad for most of us but Jeffree Star definitely had it tough too. His career was affected quite a lot with people canceling him for a variety of reasons. The internet and the people have lost their faith in him but he’s still pushing on. Even though his makeup empire Jeffree Star Cosmetics was removed from Morphe, he’s still working on releasing new products and growing the business.

A major reason for that could be how Jeffree Star is dealing with the whole situation:

Jeffree Star is apparently working on himself to be better and get back on track. And looks like he is succeeding. But the haters are getting to him too it seems.

The YouTuber wants other people to take accountability

In a weird turn of events, Jeffree Star is urging other people to take accountability for what they have done. He wants others to be responsible for what they themselves did and own up to what they did.

Here’s what he had to say on that:

And it’s okay to f*ck up, it’s okay to slip up. But baby take responsibility for your actions and your own actions only. For some reason, it’s always the people that know you the least that really have the most to say about you. So continue to do you always.

Could he be talking about Tati Westbrook putting the blame of last year’s events on Jeffree and Shane entirely? Perhaps. Or it could just be a general message to Jeffree Star haters to not focus too much on what he’s doing but what they themselves are doing.

The internet is vicious at the moment. And especially at those that they think didn’t properly apologize for their mistakes. Jeffree Star is someone who has lost many close friends such as James Charles and Tati Westbrook. The main reason for that could be his manipulative and problematic behavior that many YouTubers have called out such as Kameron Lester, Blaire White, and Trisha Paytas.

Though people on the internet think he hasn’t properly addressed the racist past of his and the damage he did to James Charles’s career and his mental health.

One former fan shares about why she doesn’t support him anymore:

Another explains how they’re still waiting for the right apology. 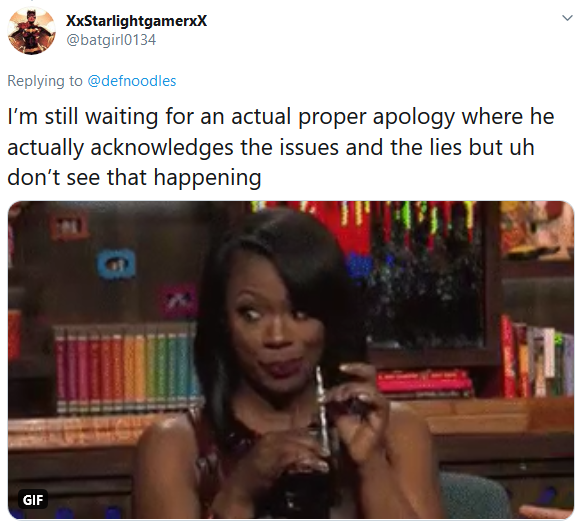 Others also pointed out how insensitive it was that he used the killing of Black people as an effort to deflect and get people to forget all the racist and bad things he himself did:

Let’s see how if Jeffree Star is going to address this or follow his own advice and focus on himself.