August Alsina, the famous singer, has been showing off his love for Jada Pinkett Smith in all the ways possible. He started off by spreading the rumor than he had an affair with Jada after Will Smith’s blessing. Jada, in response, denied the allegations and confirmed that she indeed had a short fling with him. But only when Will and her were separated for some time and they were planning for divorce (that never happened then). That entanglement was due to her own free will, (no pun intended), and that’s all it ever was. But seems like August was not satisfied with the response. So, he ended up making a song titled Entanglement. And many believe Will Smith’s latest Instagram post is a subtle hit at him.

August Alsina is breaking the internet, many bluetooth speakers as well as Will Smith’s eardrums with his new song Entanglements. One thing no one wants in their life (I guess), is someone singing about a s*x encounter with their spouse/partner.

Was it August’s way of telling Jada Pinkett Smith that he still loves her, or was it his way of trying to create issues between Jada and Will Smith? If you have heard the song, you might agree that the answer is: both the options. He defined the term “entanglement” in a very explicit way that’s not suitable for Jada’s own children as well.

I got into a different kind of entanglement with August.

She reluctantly discussed the issue with Will Smith during her Facebook Watch show Red Table Talk. August Alsina, in response, defined that “kind of entanglement” he had with Jada Pinkett Smith.

There’s more of such explicit lyrics in the Entanglement song. Through the song, August Alsina confessed he is still in love with Pinkett Smith.

Shawty leanin’ on my shoulder, got her questionin’ my willpower

Jaded by her beauty, but her reputation real solid

He really got creative with the lyrics here.

Will Smith responds to the explicit Entanglements

This might still be just a speculation. However, the whole internet believes it so it might be safe to believe that Will Smith’s latest Instagram post is his response to 2020 bringing many sh*tty situations including August Alsina’s in his life.

That is one hell of a response, or a non-response, whatever it is. IT IS BRILLIANT & HILARIOUS! 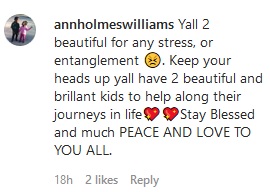 What do you think of this whole situation? Should August Alsina take a hint and stop coming for the Smith family? Share your thoughts in the comments below.