Gabbie Hanna left all of her fans worried for her when she deactivated her Twitter and Instagram accounts after posting a cryptic message. She has not been back yet. Gabbie also took a break from her podcast. The cryptic post about her life being in danger really did a number on her fans. Even though they know she took the break for her mental health, however, they still wanted her to give them a heads-up before disappearing like that. Now, new updates are coming and those are from her patrons. Gabbie might have left all other platforms. However, she is still keeping her fans posted on her Patreon.

Gabbie Hanna is not on a real break?

Gabbie Hanna has 1476 patrons till now. That’s why the news of her posting on the Patreon took ages to leak on the internet. Many of her fans are still unaware of the same fact and they are still worried. 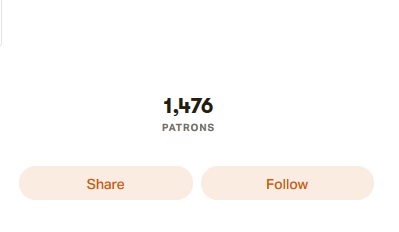 The news started to make rounds when Irene Walton and Gabbie’s boyfriend Payton Saxon took over the Box of Thoughts podcast this week. The podcast has returned from hiatus, leaving Gabbie. Both Irene and Payton shared an update that Gabbie is taking her time to reflect on things and she’ll return to the social media when she will feel better. Payton also said that Gabbie Hanna was at the dentist getting her cavities filled, alone. Seems like she is doing good and we are glad to know that.

On the other hand, some fans are not happy with the news that Gabbie is active on Patreon. In fact, they called out Gabbie for allegedly tricking people to pay for her Patreon in order to know how she is doing. A fan even said that’s unfair for those who cannot afford to pay for Patreon. Another fan came forward to justify why Gabbie Hanna is still active on her Patreon.

Some Gabbie haters have even started a fake rumor that she has died. That’s really sickening considering Gabbie Hanna is pretty much alive, doing well and posting updates on her Patreon where she feels safe. Gabbie has even asked her patrons not to bring or discuss social media drama on her Patreon.

About this dumb ass Twitter drama she said don’t bring it to patreon and don’t focus on it. It’s dumb and all false

There are some people on the internet who might not really hate her. However, they want answers.

Do you think Gabbie Hanna is tricking her fans to pay for her Patreon? Or, she really just wants to take a break from millions of her followers and only focus on the thousand patrons to keep her mental health in check? Let us know your thoughts in the comments below.