The reason why Tony Lopez was under fire recently

Twenty-twenty seriously needs to calm down otherwise I am going to lose my mind. I am here yet again to share this news which has been bothering a lot of people. All the celebrity communities need to chill down a little and avoid getting themselves on the hate radar of fans. Well, a lot of screenshots have been circulating on the internet in which you can see the famous TikTok star ‘Tony Lopez’ demanding girls to send him explicit pictures.

Now for all those people who still don’t know, Tony Lopez is a well-known TikTok star. He is Ondreaz Lopez’ younger brother. And they even have a YouTube account with the name ‘Lopez Brothers‘. This is just not it. Tony is also an active member of the Hype House. And he is spotted with the drama & beauty queen ‘Nikita Dragun’ almost every day.

Tony Lopez has a huge fan base, and that included me as well. However, the latest turn of events has made everyone think over it. Fans kind of have the same opinion about him as we have seen tweets literally loaded with some very disrespectful posts about Tony Lopez. The 20 years old TikToker is accused of grabbing his j*nk in front of minors. And he has also allegedly sent a lot of messages on Snapchat to them.

Apparently, Tony Lopez recently sent some not-very-nice-pictures to a minor. In which he asked her to show him her b**bs. The picture next to it is very disturbing. 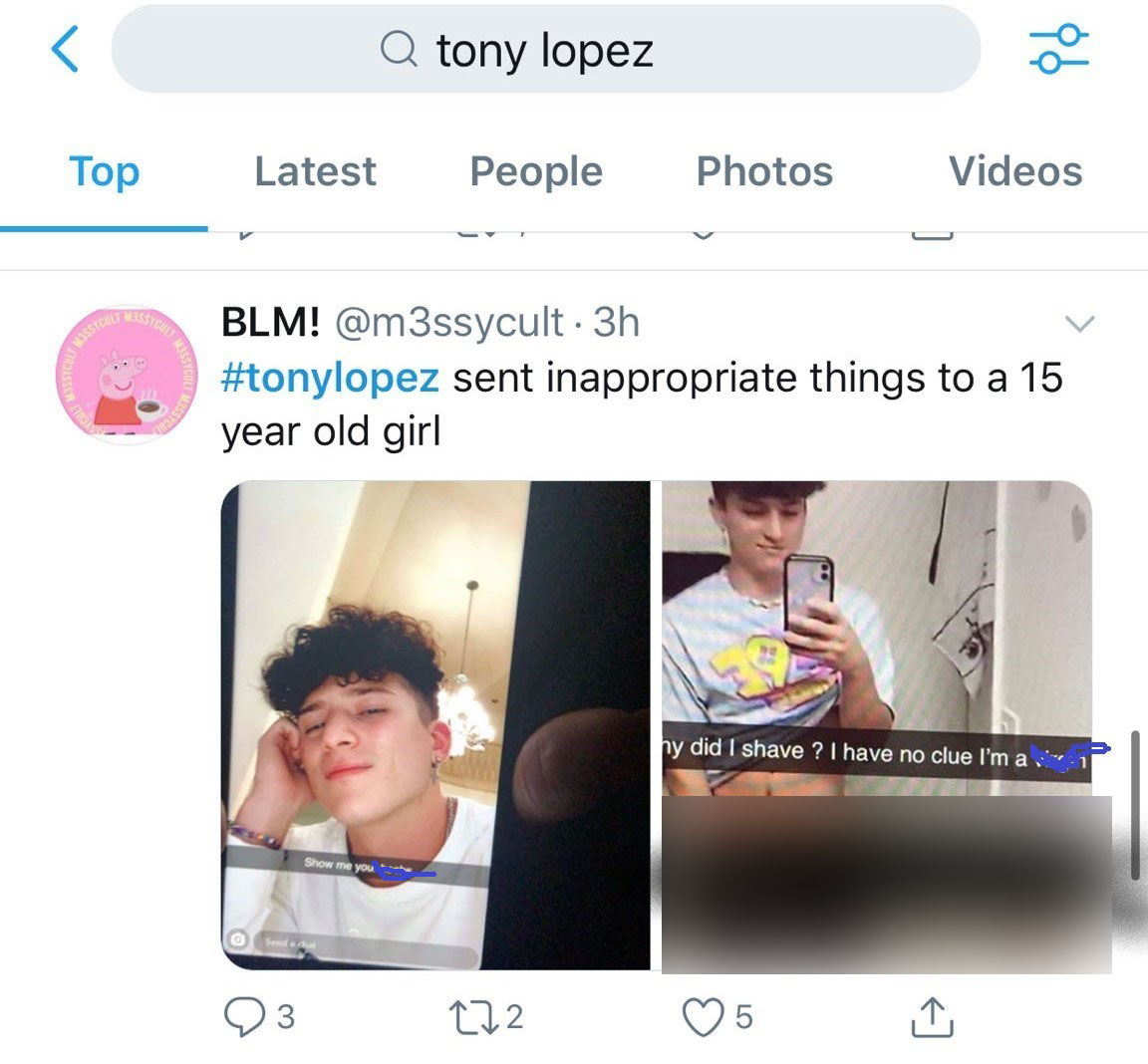 Fans are not really happy with Tony Lopez’s rude selection of words especially the ‘N’ one and actions. 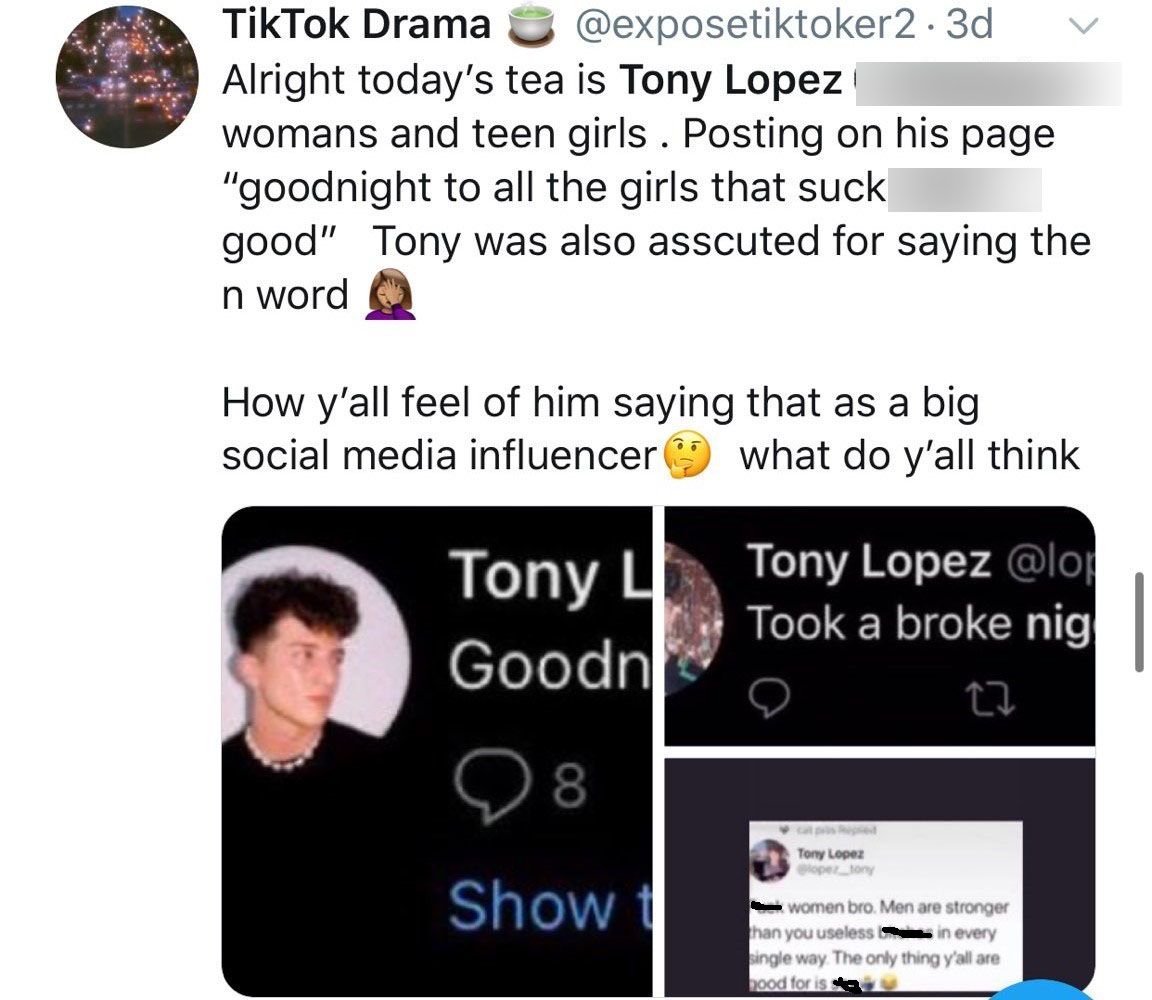 Some fans even want Tony Lopez to be banned from all of his social media accounts. We still don’t know why he would say or do something awfully hurtful to people who support you.

Nikita Dragun Is Here For The Rescue

This girl was recently caught in a drama regarding her recent launch of fragrant candles. But she just ignored it like a boss and moved on without even addressing the whole thing. But now she is here to save one of her best friends ‘Tony Lopez’. They are seen on each other’s social media a lot. 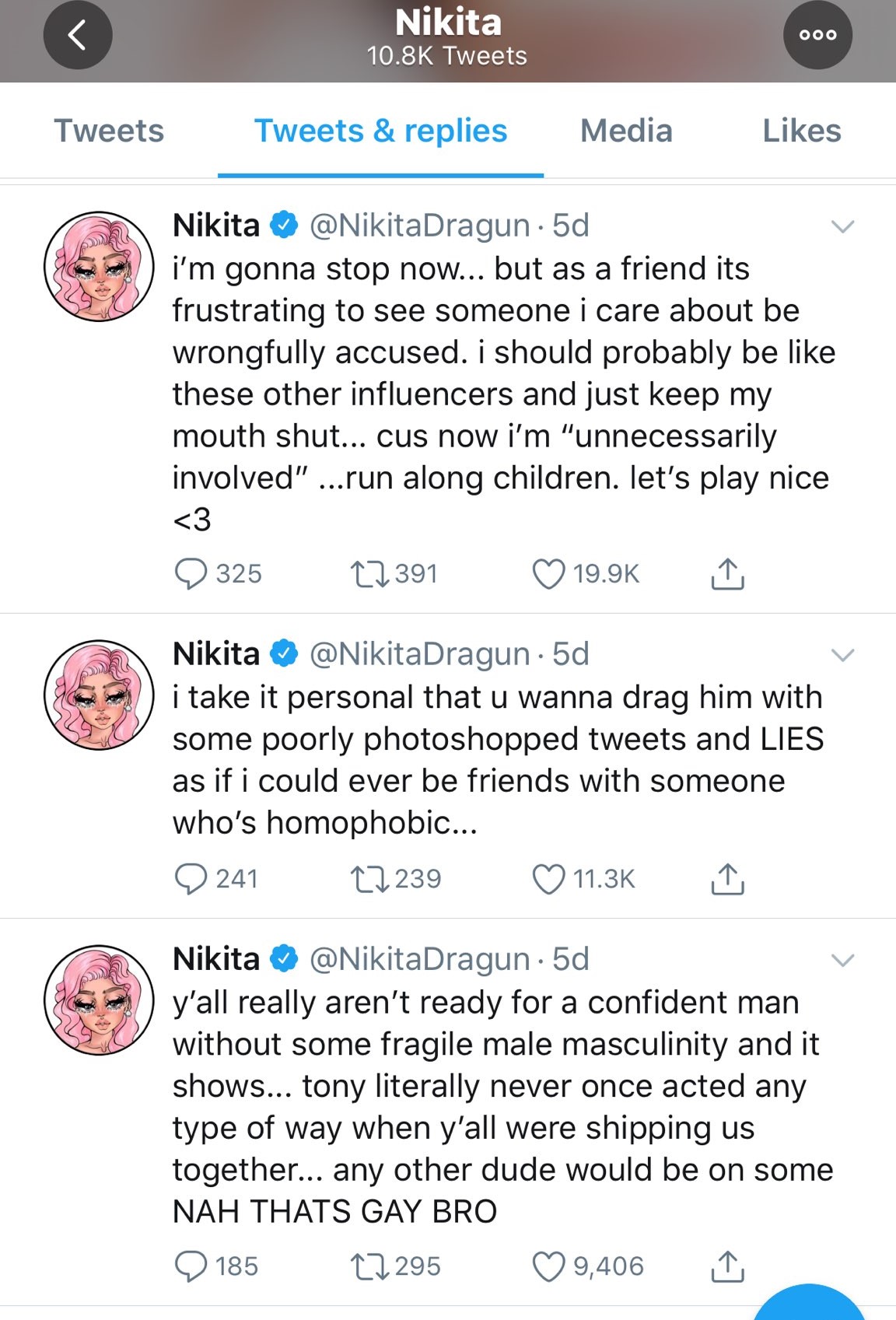 According to Nikita, she never really wanted to get involved in the current drama but she had to. In fact, she was dragged into the whole drama. Because a lot of fans were shipping her and Tony together for a very long time. She further mentioned that all the tweets and messages are photoshopped. People only want to jeopardize Tony’s career.

Tony Lopez even apologized for his actions on social media.

“My intention is never to hurt anyone’s feelings. And I feel like unfortunately, I have hurt some people’s feelings by the things I have said, & I need to take accountability for it. And say I am sorry. I want to become a better person.” 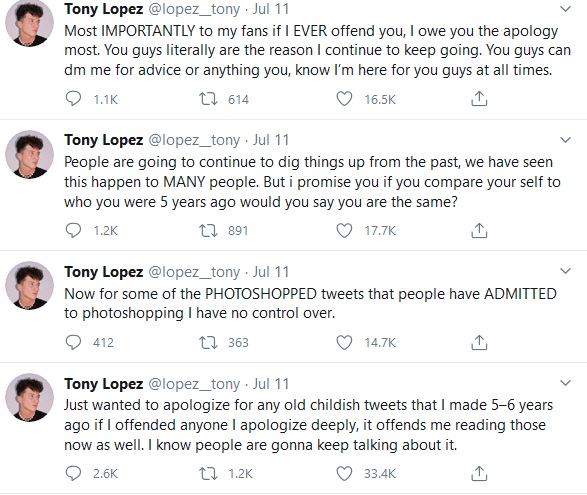 Stay tuned for more updates on the TikTok stars.

Related: James Charles Does Sing-Off with TikTok Stars Lopez Brothers & Anthony Gargiula
Hype HouseLopez BrothersNikita DragunOndreaz LopezTikTok dramaTony Lopez
0 3,941
Share
Subscribe to our newsletter
Sign up here to get the latest news, updates and special offers delivered directly to your inbox.
You can unsubscribe at any time

Logan Paul Just Got Himself Tested For COVID-19