These days, one of Gabbie Hanna’s rocks is her beau and boyfriend Payton Saxon. He is a kind and loving person who encourages her to stand up for herself. He is her ‘biggest fan’, as Gabbie herself puts it. Well, she has done that quite a few times this past week while she claps back at the narratives that are going around about her. While Gabbie tweets every hour of the day, Payton backs her up with replies and conversations with her fans to help clear her name. This past week, he has done his girlfriend justice with all the love amidst the messed up situation going on around. In an attempt to clear his girlfriend’s name, Payton Saxon, Gabbie Hanna’s boyfriend, had a twitter feud with Nick Snider.

So, it all started Nick posts a clip of Gabbie Hanna’s live stream where she calls out drama channels. In it, she says,

Following this, Nick says he’s getting a restraining order to which, a fan tags Payton and says,

I don’t want him to be afraid.

Nick Snider, was addressing the Gabbie drama from his own perspective on his Twitter. In a tweet following Payton’s above response, he says,

Now they are saying the loved ones meaning her bf are being attacked but he’s been inserting himself into MANY threads. If you can’t see the manipulation then lord be with you.

Nick, I’m only here to hold you accountable for your words. If you want to run your mouth fine, but I’m equally able to respond. You’re not innocent. In my opinion, you just need personal accountability. 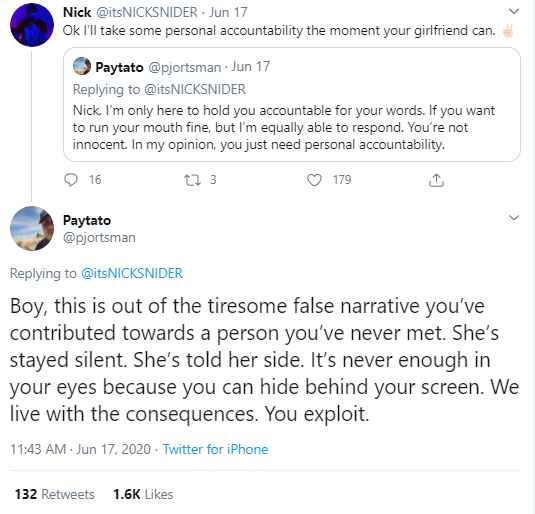 Gabbie Hanna’s boyfriend does not seem to be in the mood to hear anything against his girlfriend with his sharp response. Nick Snider probably understanding that just responds with an ‘ok, keep believing that.’  Payton goes on to add a note for good wishes.

Meanwhile, Nick Snider is quoting Gabbie Hanna from the Jessi Smiles feud in another thread. In that, Dustin Dailey is also involved in, asked another drama channel to state facts in defense of Gabbie Hanna. There, Nick Snider adds,

“His friends didn’t rape you Jessi”

To this Payton responds saying that the quote does not involve him. So, he should stay out. 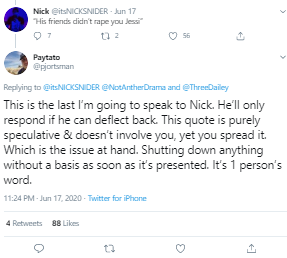 In the last word, Nick Snider implies that Gabbie Hanna is paying her boyfriend to be with her.

Whew. The overtime you’re working I hope you’re being compensated.