Gabbie Hanna is having a streak of clearing her name out in the world of social media. Over the last 7 months, there have been several allegations against her. These include her drama with Alx James who already clapped back at her for her supposed ‘justifications’ and attempts at contacting him. Also, on Jessi Smiles, who still has some bad blood going around with the Bad Karma singer. Moreover, Trisha Paytas, Jen Dent, Dustin Dailey may have The Gabbie Show is cornered. But, that does not stop Gabbie from going on her road to clear her name but it seems that it is not that easy. So, while she fails to acknowledge those who provide solid proof from their side, she is focusing on the smaller channels. Helloleesh, a YouTube channel, was the focus of one of Gabbie Hanna’s recent exposure.

Gabbie Hanna replies to Helloleesh tweets and calls her out.

So in one of her recent live streams, Gabbie was talking about this channel that ‘posts about her in a bad light’ and does not name her. She was talking about her and supposedly exposing her on her live stream with messages, that Gabbie did not actually show. However, Helloleesh and Gabbie Hanna are not exactly two for connecting as they have different fanbases and this HUGE sub gap. So, what happened was, Gabbie took to her Twitter during her MANY twitter wars, and Alicia Paige called her out in response to a tweet:

actually i don’t get into drama, people constantly pull me into drama and make sh*t up. i cant help people using me for their titles and thumbnails. go to MY channel, go to MY tweets. where do i literally ever start drama? so f*cking tired of being punished for what ppl do to me.

To this, Alicia pointed out the drama between Gabbie and Trisha Paytas and Gabbie and Jessi Smiles. She says that her rants on her Insta Story literally caused the dramas.

Oh, so we gonna just forget about the insta story rants that sparked Trisha vs Gabbie vs Gabi vs Jessi vs the world. Okay.

After this, Gabbie openly started to comment on Drama Channels such as Dustin Dailey, and how they spread hate about her. Helloleesh comments on how she has defended Gabbie Hanna in the whole Alx James matter several times.

IDK how many times I’ve said Alx James seems like a terrible friend to @GabbieHanna. How many times I’ve stood up for her character as a SUPPLEMENT to criticism. But my videos are hate. We’re allowed to be hurt by your words, too.

Gabbie gets fueled up and addresses Alicia. 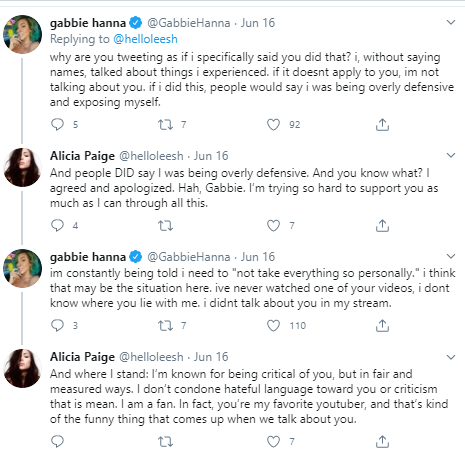 Up until that point, she wasn’t naming any names. However, Helloleesh thought to clarify herself as Gabbie Hanna stans were already starting to come after all the drama channels who have used Gabbie’s name. However, the whole while Gabbie is trying to show Helloleesh, that she means nothing to her, Alicia is trying to prove to her that she is defending her in this whole situation. Even so that before this, she claimed to be supportive of Gabbie and her problem with YouTube.

So, then, in a video, Gabbie again mentions all the drama channels who use her name in their titles to gain attention. She also talked about channels without adding their names. However, a lot of her fans came to her with the names of channels she ‘might have been’ referring to. During that live stream, while the Bad Karma singer was busy calling out these channels, Alicia was quoting her tweet to show her support to Gabbie putting aside her personal grievances.

I want to be clear that it is possible to support people in areas you agree with and disagree with other parts. It is how normal human involvement is supposed to be. I am critical. However, I stand with Gabbie against suppression. I hope she reciprocates. We’ll get there. ♥️ https://t.co/BkYDJXArvg

So, once Helloleesh realized she was the one being mentioned in the Gabbie Hanna live stream, she felt hurt and bad. Well, as any fan would if their star called them out the way Gabbie was calling out everyone. During this time, she starts sending tweets like,

Also, I don’t f*ck with people’s mental health when they’re hurting. You can say I’m too easy on some people, but what with what’s going on on the Internet right now… Some of these people need Jesus… and seem a bit obsessed with their own hatred.

After a few more indirect shots, Helloleesh directly approaches Gabbie on iMessage. She tells her that she did not mean to cause trouble the way the whole thing started to become.

Then, Gabbie Hanna goes for a live stream exposing messages in her own light.

While Alicia was covering up for Gabbie saying it wasn’t her she was exposing, Gabbie Hanna started a live stream where she says she is exposing messages. However, it is a read-along rather than showing receipts. Also to mention, Gabbie Hanna only reads most of Helloleesh’s side of messages.

The video really looks like Gabbie is struggling with herself as her hands tremble. However, it seems pretty sketchy once she quotes the messages of Alicia where she says, ‘I just wanted to let you know how I felt about the mentions of me in that live‘. So, Gabbie responds to this,

Still like, stop making this about you. Stop inserting yourself into like, my life and my drama.

Although she later corrects herself saying ‘into drama’. But, for that very brief moment, it seems that Gabbie is possessive of ‘her drama’. Meanwhile, Helloleesh is silent. Gabbie Hanna talks about things like how Helloleesh called her and said she was in love with Payton. So, on the 19th, after watching this Gabbie side expose, she decides it is time for her to speak.

In a tweet, Alicia releases a screen recording of all the messages.

So, in one part of the video of Gabbie Hanna, she says that Alicia used the term monster for her. However, looking at this screenshot Helloleesh later releases, it is clear she did not mean it in the sense that Gabbie Hanna made it out to be. 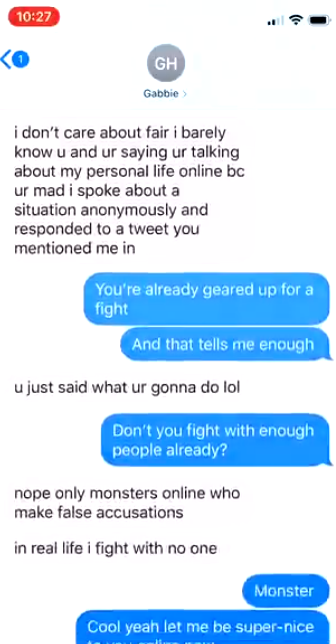 She also goes on to make a full video addressing everything that Gabbie said in her video and before.

After this, most followers are stunned at how well Gabbie Hanna spun the messages to show herself the victim.

Literally. I watched Gabbie’s live before reading them myself and it’s AMAZING how well she was able to spin it. When I read it myself I get like I was reading a totally different convo.

Gabbie’s Boyfriend, Payton Saxon inserts himself into the situation.

So, when Alicia posts her side of the story, Gabbie Hanna seems to follow through on what she promised Helleleesh. She inserts Payton, her beau into the drama. 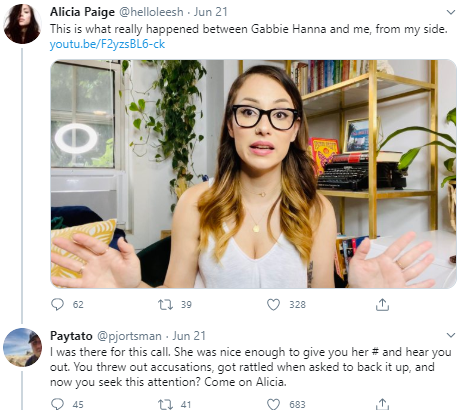 Now Payton says that Alicia was not able to back herself up. Alicia responds to him angry with the kind of narrative Gabbie’s boyfriend is sharing.

Also, I didn’t get “rattled”. I didn’t know her song lyric and was quoting a general thing she and her fans say and when I realized the wording was IMPORTANT to her, I said I understood and that the “receipts” wouldn’t be there then. You know, the lyric “written about me”.

After a while of a pointless bicker, Alicia Paige asks Payton and Gabbie to leave her alone.

So, kindly, I am asking both of you to STOP. Stop tweeting at me, stop bringing me up. Stop talking to and about me. Just STOP. I am working to find out if this image can be enhanced enough for my number to be leaked and I don’t even want to be doing sh*t like this. Let’s be done

Meanwhile, from the earlier mention that Gabbie Hanna claimed that Helloleesh said she is in love with Payton, a fan mentions that Payton should not be in the conversation between the two girls. To this Gabbie replies:

what was unfair was her throwing out false accusations and then when we asked her to back them up, start crying and saying “please I love Payton so much I don’t want him to hate me.” it’s deflection and not a way to handle being called out for lying.

Alicia Paige defends herself explaining clearly that she did not say anything like loving Payton. 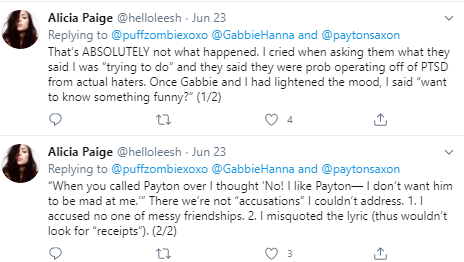 So basically, the end game being, Gabbie Hanna and her boyfriend Payton are once again defending themselves without solid proof. Their supposed attempt at taking down Helloleesh did not work. At least, that is our take on this whole issue. Let us know what you think or if you think we missed something out in the comments below!