‘Why does the Internet hate Gabbie Hanna and what is with all the drama all the time?’ Well, that is a question the internet cannot answer for the life of it. Mostly because the answer keeps changing. Now, if anyone here is an old follower of Gabbie, you know she was the best of friends with fellow YouTuber Alx James. Now it seems she is using her hate for him in drama with Dustin Dailey. Although, you may find yourself confused about what is going on right now, let us sort it out for you.

After the release of her music video Special, Gabbie decided she is no longer ‘staying quiet’.

The YouTuber released her latest music video, Special from Bad Karma, on the 15th of June. The very day, some of her fans started talking about how their views and likes were not adding to the count. This then turned into a whole thing with Gabbie Hanna starting a tweeting spree calling out to YouTube or ‘shadowbanning’ her. This continued on for quite a while. She even did a live stream or two during this time.

Meanwhile, Dustin was subtweeting at Gabbie and her Followers. 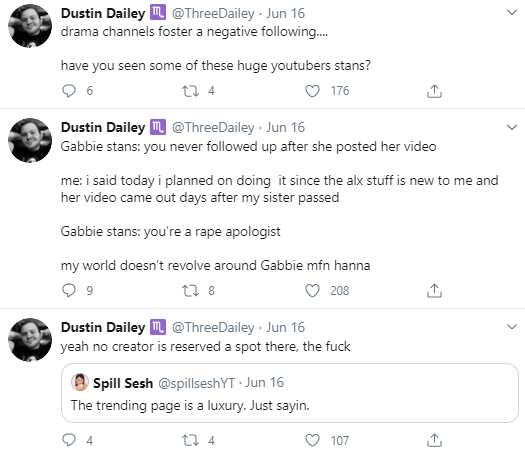 So, as Gabbie Hanna was busy with her shadowbanning drama, Dustin Dailey quoted a tweet saying,

The trending page is a luxury. Just saying.

After this, he subtweets at Gabbie Hanna’s followers saying

have you seen some of these huge youtubers stans?

One of the fan tweets got the attention of Dustin Dailey.

Following this, one of Gabbie Hanna adds her input to the drama,

We love a good subtweet

The fan deleted the tweet but Dustin was having none of it as he tweeted a picture of the tweet.

Meanwhile. Dustin speaks out saying that he was mourning his sister at the time when people called him names for not making a video on Gabbie Hanna and the changing perspectives around.

i was trying to be nice but since you wanna be direct. you called me a rape apologist for not running to make a video to cater to @GabbieHanna putting out info that changed things, while i was mourning the loss of my sister. go off tho https://t.co/CDeLAmZVlC

Gabbie Hanna then responds to him saying he’s a hypocrite?

The Youtuber herself is quick to clap back at Dustin Dailey for staying in touch with Alx James and calling her out for making a video with a rapist. Gabbie’s tweet says,

No one called u a rape apologist. They pointed out your hypocrisy as you harped about me being one and collabing w a rapist, while actively being friendly with alx. Stop twisting my and my fans’ words.
My sincere condolences for your loss

Now the drama with Alx James and Gabbie Hanna is one where we are all trying to decipher who is telling the truth. Most recently though, Alx shared screenshots and proof of how he has tried to reach out to Gabbie to get everything over with. You can read the article referenced below;

Dustin says he wasn’t involved in any conversations with Alx James.

Dustin is not about to back off with the allegations. He says that when Gabbie posted the video addressing all the drama she was a part of at the time, Alx James made an attempt to contact him. However, he wanted no part of it at the time. It seems that this story is not getting easier anytime soon.

.@GabbieHanna honey after you dropped that video alx sent me his number and wanted me to call him and i didn’t. i don’t talk to that man and the last thing on my mind during that time was work. https://t.co/HA5FQCYD6b

Gabbie Hanna is here for the full drama with all the proof. She gets the tweets exchanged between Alx and Dustin and posts a full and elaborate screen recording.

So then, Dustin points out that as he has already said, he did not watch her video before that day. He then implies that if he knew of his involvement with Jessi Smiles’s alleged rapist, he would not be talking to him. His emotions are pretty expressive with the tweet that says,

yes @GabbieHanna and like i stated previously i knew zero about Alx’s involvement with Curtis before your video i literally just watched today and yes curtis is a piece of shit and fuck @AlxJames10 your point? https://t.co/W2xr95R8xF

Amidst all this drama, Dustin calls a fan of Gabbie Hanna’s trash.

On the other end, this is happening. A follower of Dailey’s calls Gabbie ‘manipulative’. 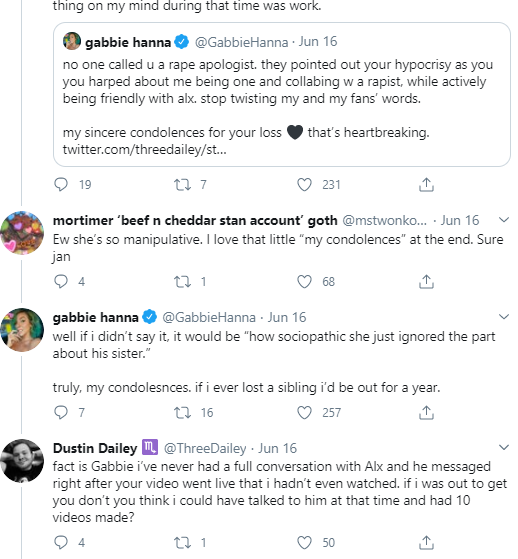 While Gabbie Hanna and Dustin Dailey are tweeting to sort out the drama between one another, one of her aggressive fans comes at Dustin.

This fan obviously takes it too far with the insult at the end. Dustin Dailey quotes this tweet and asks Gabbie to come ‘collect her trash’.

Gabbie also seems to not ask her fan to settle down as she piles on saying that he’s really going to call a fan trash? To be fair, here even we say, this was wrong.

Anyway, Dustin is not backing down as he calls Gabbie a ‘sweaty a*s pig’ too. Okay, what in the world?

After this, Gabbie gives him some ‘positive advice’.

Dustin Dailey has enough of Gabbie’s Drama and blocks her.

Dustin seems to realize that this is going to be a neverending battle. So, he backs out of the situation.

And the fan who supposedly started the commotion is still talking after this.

She posts a screen recording of the YouTube search results saying that Dustin knew he was supporting a rape apologist so he deleted all Gabbie Hanna videos. However, Dustin says that he deleted them because he’s over the drama and Gabbie Hanna does not deserve his attention.

i deleted them because she’s not getting any attention from me period anymore she can have the day she deserves and it looks like she is https://t.co/LMA5kLidfn

Dustin, to have the final word, posts a video titled, ‘You’re Not Special’.

In the video, he addresses the Gabbie Hanna Twitter Drama. He explains how it all started because the music video to her song ‘Special’ or I’m not Special, did not receive the attention she thought it would. He explains the entire situation in the video. After all the information above, you would probably get the video without having to surf more.