So… I think this time, YouTube really has broken creator and singer Gabbie Hanna. There is so much going on here that it might be safe to that honestly, it is hard to understand it. However, we have got the full story and here it is! Gabbie just put out her music video for her Bad Karma EP Track Special. And while we love that and everything, it seems that Gabbie is not happy about the way things are turning out. Supposedly, now YouTube is ‘sabotaging’ her career.

In the span of the last 48 hours since the release of the music video for Gabbie Hanna’s track Special on YouTube, her Twitter has become a whirlwind of tweets. And to be real, they are all about how her career is in jeopardy as YouTube is ‘Gaslighting’ and ‘Shadowbanning’ her.

Gabbie called out YouTube on the day of her Music Video release.

So, just as Gabbie Hanna’s video released on YouTube, fans started to notify her that their views and likes were being removed from the video. Gabbie keeps adding tweets on the matter telling her how she is getting messages and tweets.

These tweets concern the situation about how they are getting their likes removed and not getting her videos in their search results. 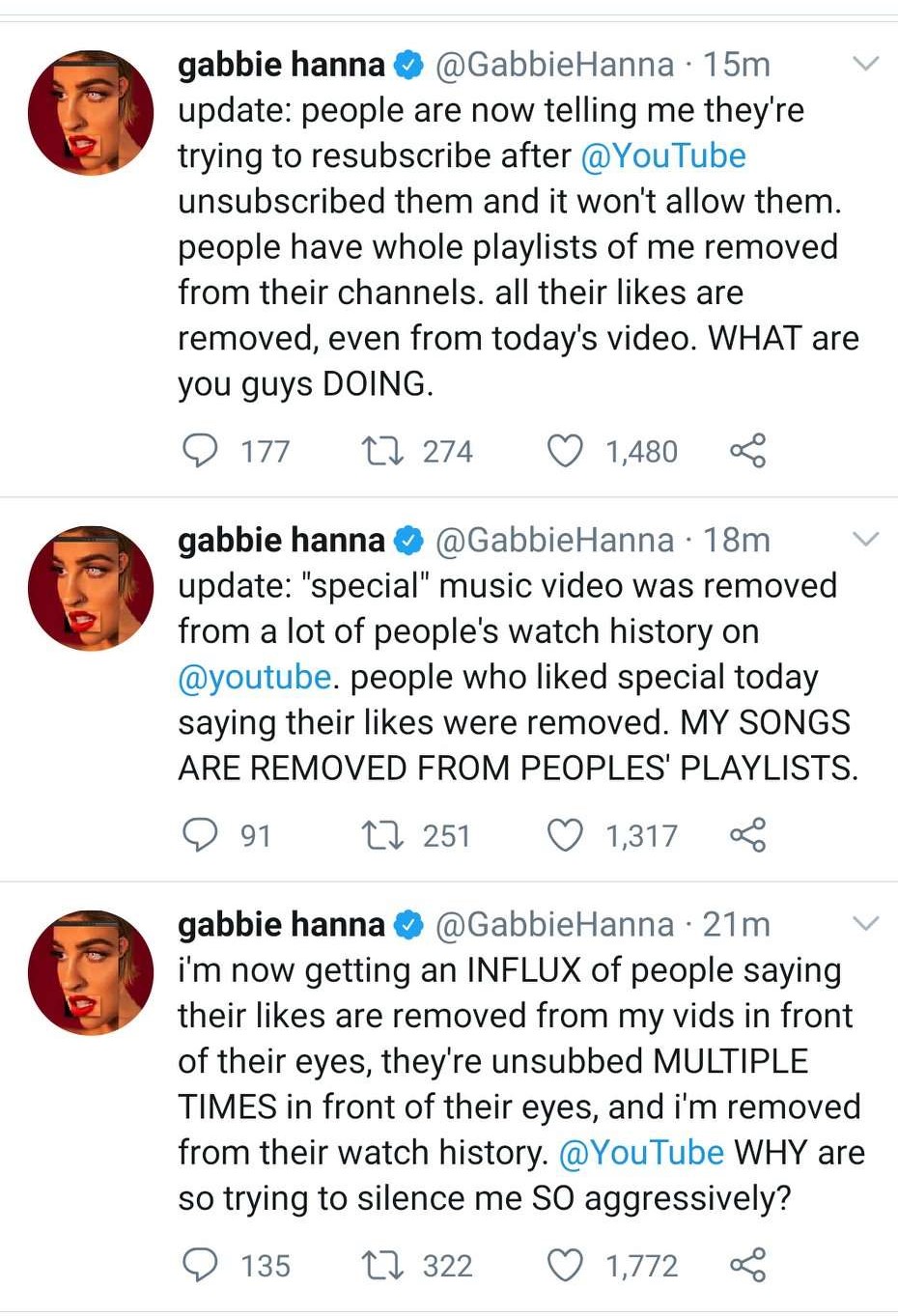 Gabbie Hanna says all viewers get when they look her up, are hate videos.

To top the whole situation, when Gabbie Hanna does her research on whether she gets her content in YouTube search results, she is shocked. In her truth, the platform only shows the results of other people posting hate videos about her. She says it’s not only her but also most of her fans.

She asks YouTube is this is what they serve their audience because all of this is about painting Gabbie Hanna in the wrong light.

In a Livestream, Gabbie Hanna breaks down.

In her video on her second YouTube Channel, More Gabbie Hanna, she has a breakdown talking about how the situation hurts. About 20-25 minutes in the video she starts crying. The video is titled ‘my toxic relationship with youtube | I’ve been shadowbanned’.

She talks about how she is disappointed by YouTube and the way they are treating her. According to her, all of this is because of the allegations upon her from the Jessi Smiles drama and others. People call her a ‘rape apologist’. In most of her comments, she is often referred to as the names people use for her in hate.

During the Livestream, many fans were supporting her by putting #IStandWithGabbie in the comments.

This is my career, this is my life. This is people from my home town seeing lies and rumors spread about me. (Heavy sigh) This is my relationships being ruined. (Voice cracks) This is (why) YouTubers and my friends from this space will not answer my text messages. Because they are afraid to be swept into all of this drama.

Gabbie Hanna goes on to claim that all these rumors from YouTube and around her are false.

This is my friends unfollowing me on social media because they believe a false narrative.

The problem with the views is not one that only Gabbie Hanna is experiencing.

Other creators in the time, have also noticed their views being messed with. Ever since 2019, YouTube has some messed up algorithms going around and several content creators complain about the fall in views or likes on a video. Gabbie Hanna may not be the only one going through the trouble right now on YouTube. YouTube Channel ‘The Viewers Voice’ while explaining the situation with Gabbie’s breakdown, explained that he has also been through this. He talks about how YouTube’s control management went downhill when the COVID-19 Coronavirus(SARS-CoV2) Pandemic came around. He is grateful for Gabbie to bring the whole situation to YouTube in a way that they may actually address it properly.

However, she also calls out the page for their title.

After this, they changed it from, ‘Gabbie Hanna loses mind on Twitter because of THIS’ to ‘Gabbie Hanna didn’t like my original title’. Although we highly doubt this was from the goodness of their heart rather than a mock.

Later Gabbie says that the problem is improving.

So, after her breakdown on the YouTube Livestream, Gabbie Hanna posts a tweet that her fans are now saying that the problem is getting better. 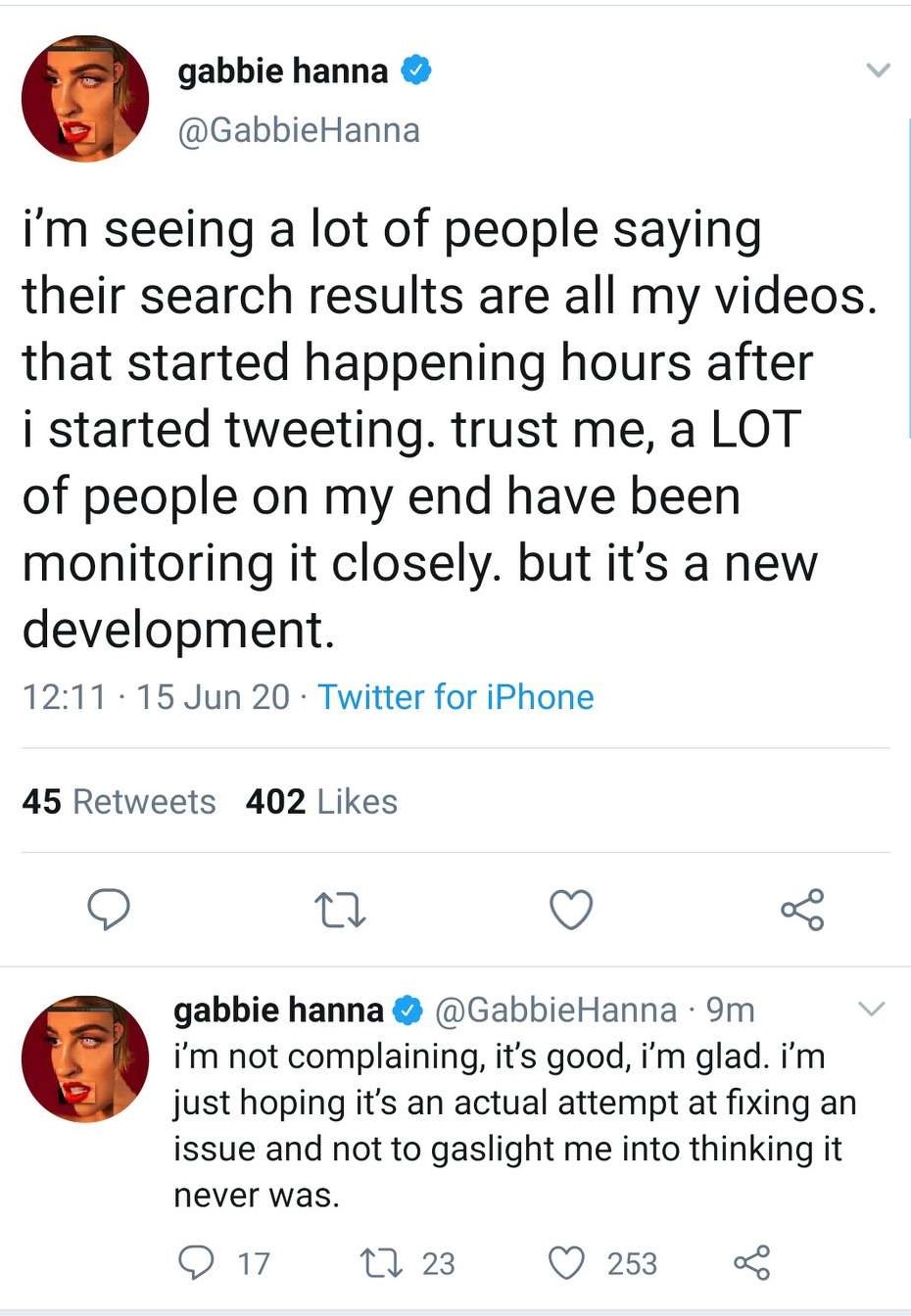 Gabbie Hanna is these tweets, points out that she is grateful for this new development from YouTube.

Then, she finds proof that YouTube is indeed shadowbanning her.

In this video, Gabbie Hanna talks about how she has found out that YouTube was actually putting her down. All of this starts from way back in 2019 after the release of her Broken Girls music video. The video was taken down from trending when Jessi Smiles posted her video on Gabbie Hanna. Since the, Gabbie has never trended. Now, she is not keeping her silence. She also credits a few Tea spilling channels for their neutral take on narrating her drama. Watch the video to find out more. We are curious though, on what was the thing on her computer screen that made even Payton react that way.