Trisha Paytas might have moved on from Jason Nash physically, however, David Dobrik & the vlog squad are still pretty much on her mind all the time. She recently turned 32. And in honor of her birthday, she arranged a $10,000 giveaway for her fans. And apparently by doing so, fans think that Trisha believed she has a right to call out David Dobrik and his assistant Natalie Noel for selling her gift for donations. That really happened, Natalie put Trisha’s Gucci-Pants-Gift to David on sale on her poshmark, and that pissed off Trisha.

While she has previously done it as well, however, Trisha Paytas explained the new-feud on her Instagram stories, calling Natalie a bit*h multiple times. We know Natalie and David Dobrik are very close friends and they live together. Natalie also happens to be his assistant as well. Therefore, whatever she does obviously has David Dobrik’s approval and support.

Natalie Noel has a poshmark account where she sells her clothes from the closet. Therefore, when she posted a sparkling, holographic, Gucci Pants worth $1700 on the poshmark for $1500 initially, fans were quick to solve the puzzle. Those pants were actually a gift from Trisha Paytas to David Dobrik, back in the days when they were still “friends”. Someone told Trisha, and she was not happy.

Comparing the Nikocado Avocado’s situation with the vlog squad, Trisha Paytas said that people believe her now how Nikocado is not exactly what he seemed to be back then. And she also believes that now fans will agree with her assessment of Natalie Noel; that “she’s a bit*h”.

the King David is not going to like that you got this drama. So I’m gonna see those pants and I’m sure they’re gonna be taken down within some time today. Because they can’t have drama, they can’t have scandal.

…..and she does not stop at that

Trisha Paytas did not miss the chance to throw all the shades in the world on Natalie Noel. And it feels like she was mostly doing it to get a reaction from David Dobrik. Calling her out for her “sale purpose”, Trisha said Natalie could have directly donated something to the COVID-19 charities, or she could’ve kept the price tag low as the product was used. And then, shading enters the scenario:

You live rent-free and I know you are getting paid, and your boss makes a 100 times than what I’m making. So I think you can do it.

Trisha Paytas then proceeded to share all the receipts on her Instagram story, adding that she has donated $3000 to America’s Food Fund to rival Natalie’s donation. 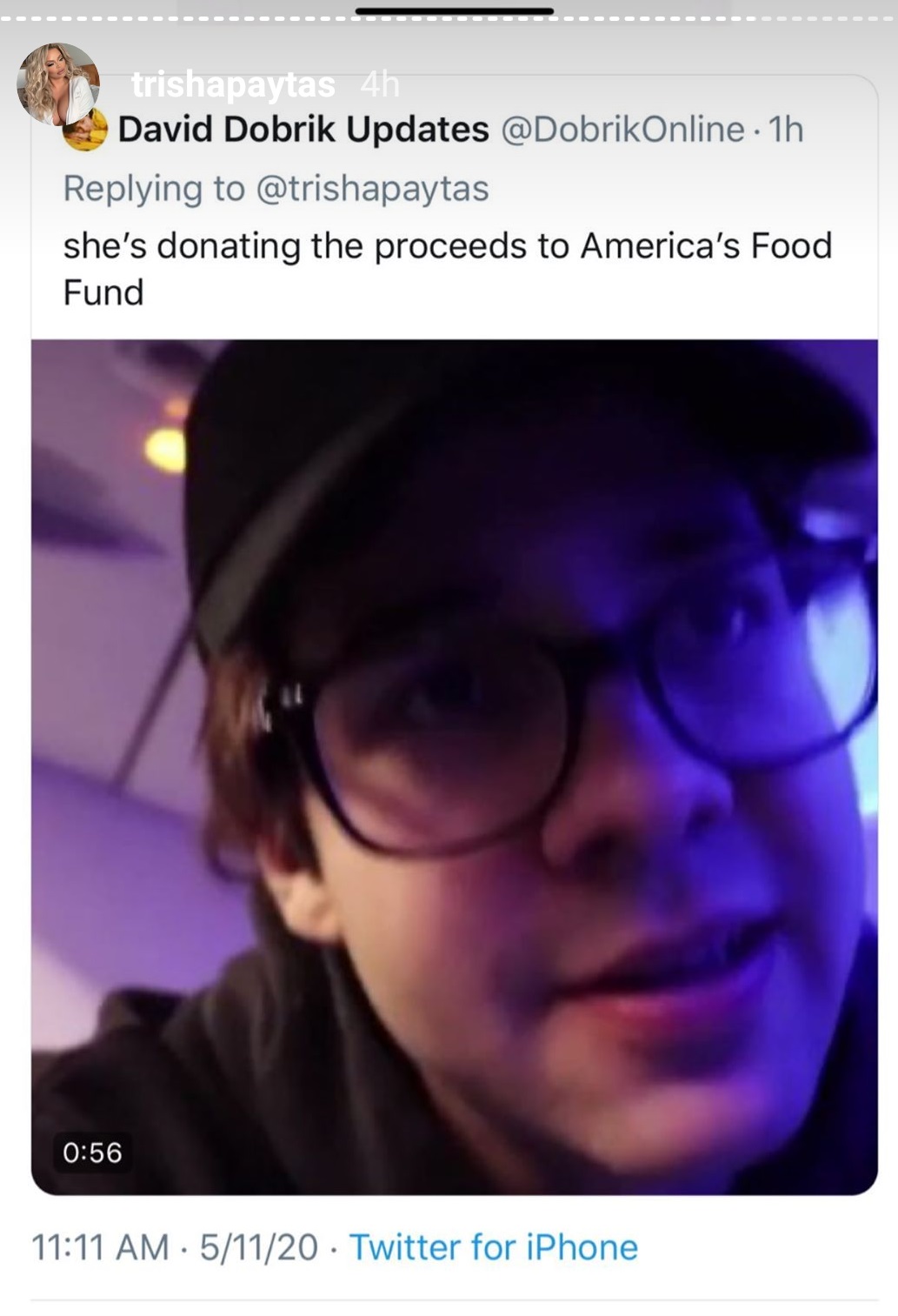 In fact, Trisha also shared receipts of her donation. 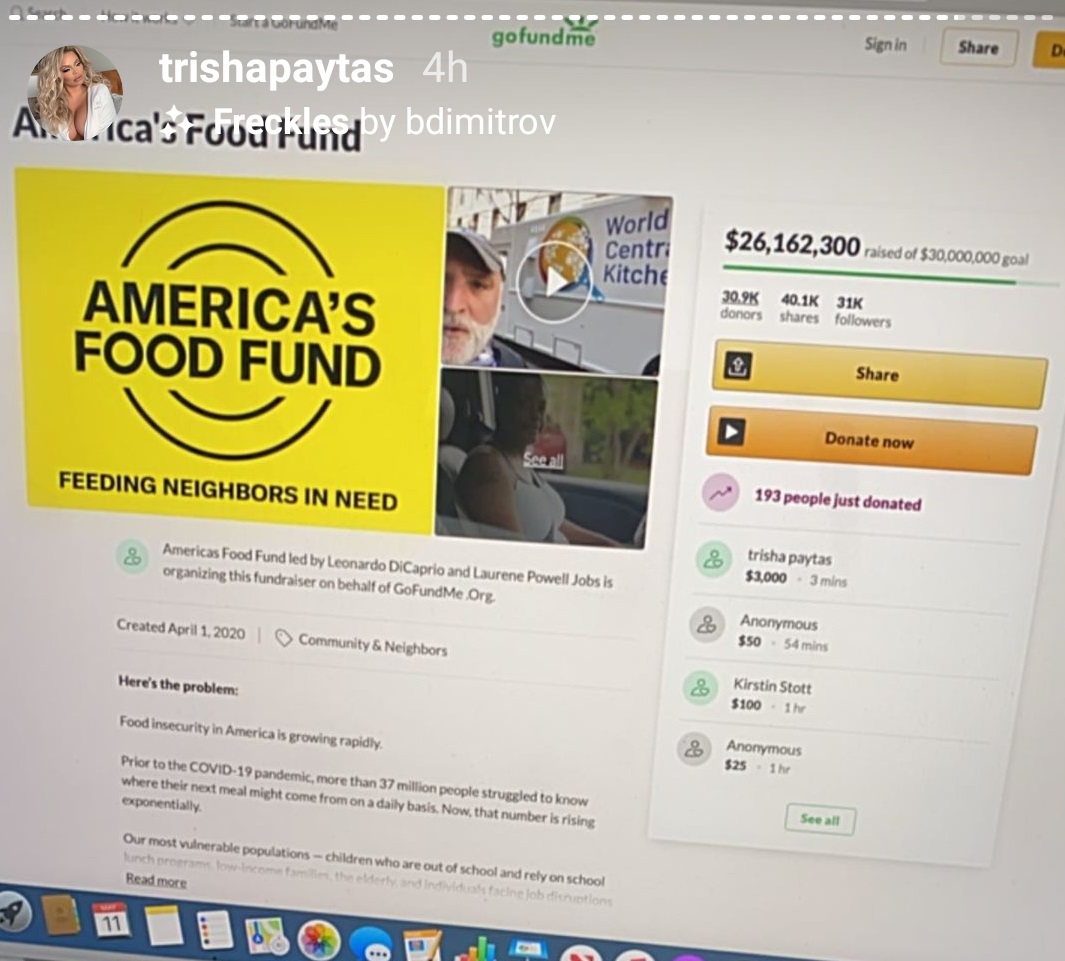 And she said she’ll be waiting to see David Dobrik’s assistant Natalie’s name on the donors page. 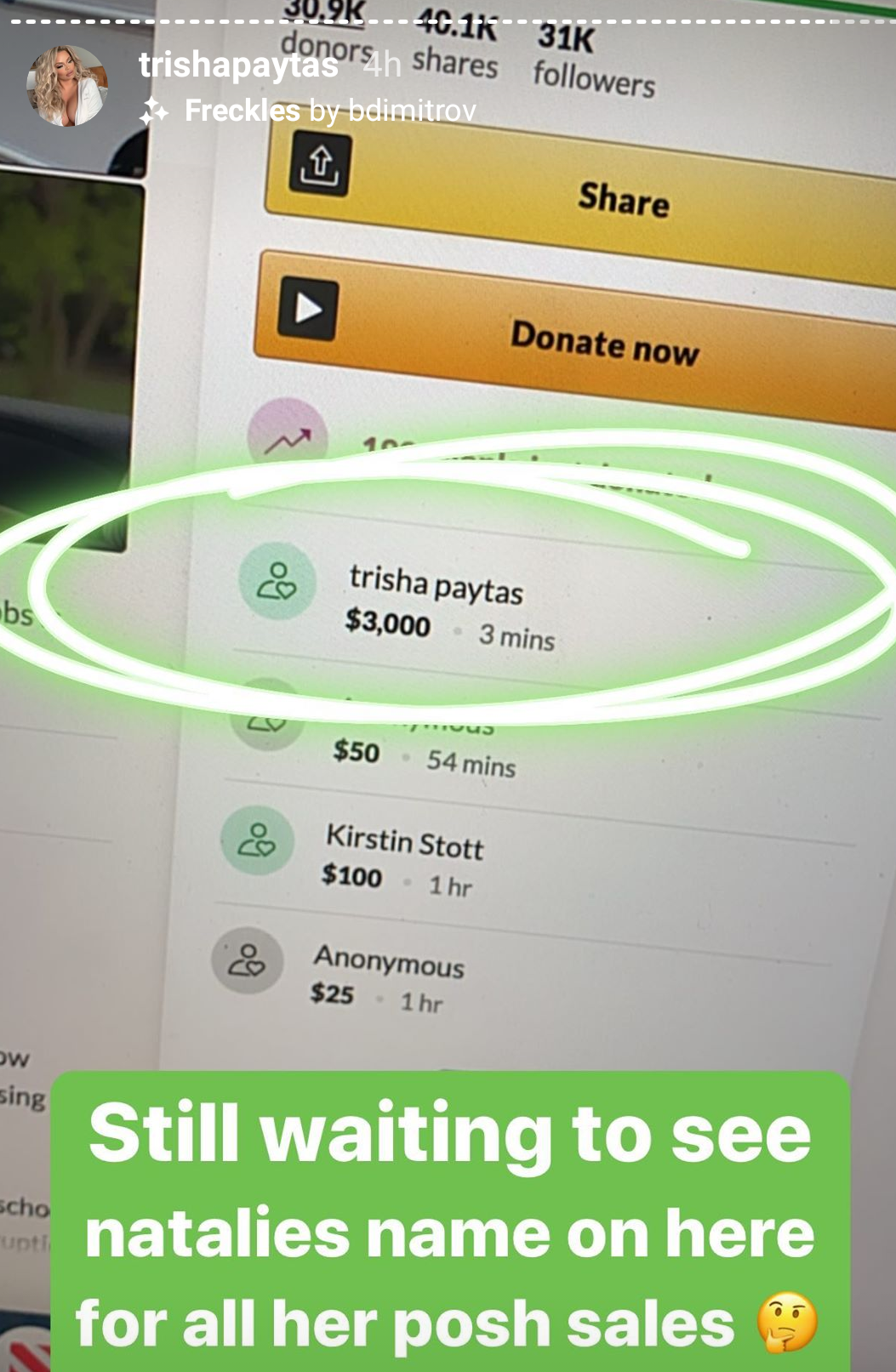 In a way, she also shaded the “NWT” tag Natalie had on the item. NWT stands for “new with tag” products. However, there is a picture of David Dobrik in those pants. Does that qualify for NWT? Though the King David’s Gucci pants were finally sold for $1000, fans have been showing support to David Dobrik & Natalie Noel before and after Trisha Paytas’s rant on Instagram stories. 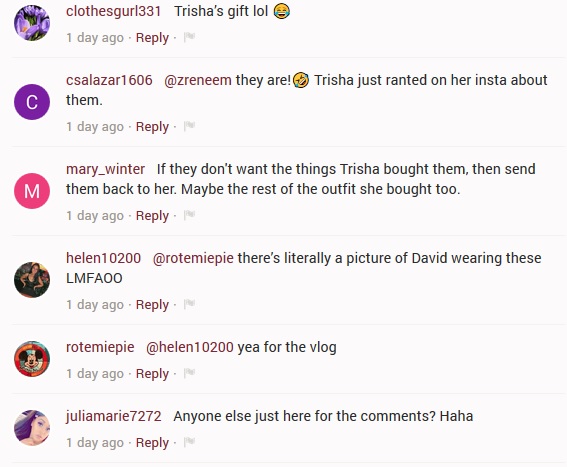 While you can see a few Trisha supporters in the comments section, there were some logical comments as well: 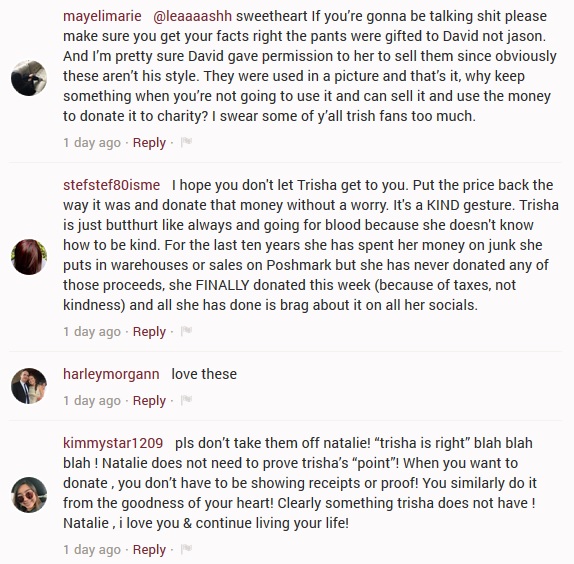 Just a few days ago, David Dobrik made one of his best vlogs, sharing cash and Xbox, iPads etc with his fans, making their quarantine life special. Why Trisha Paytas felt a need to call David & Natalie out days after the vlog went viral, we’ll never know.

Related: David Dobrik Catches Todd With Assistant Natalie?
David DobrikNatalie NoelTrisha Paytas
0 4,636
Share
Subscribe to our newsletter
Sign up here to get the latest news, updates and special offers delivered directly to your inbox.
You can unsubscribe at any time