Did Colleen Ballinger take advantage of a minor, Adam McIntyre?

Recently, Colleen Ballinger was embroiled in multiple dramas at once. She recently apologized for her behavior in the latest video. First of them was her controversial video where she is saying racist things while donning her Miranda Sings character. Another one is where she is saying horrible body-shaming things about a lady that was sitting next to her on an airplane ride. Though, the most controversial one involves an underage YouTuber, Adam McIntyre. And Adam McIntyre claims that he was used by someone he was a fan of, Colleen Ballinger. Let’s delve into the story, looking at both sides.

Related: Colleen Ballinger Opens Up about her Wedding to Erik Stocklin

Adam McIntyre’s side of the story

So, in a video titled ‘Colleen Ballinger, stop lying‘, Adam reveals everything that happened to him. In the video, he talks about how he was a fan of Colleen at first. So much so that he even had dedicated fan pages of Colleen and Miranda on Twitter and Instagram.

Colleen befriends Adam and starts using him for her own benefit

When he interacted with Colleen Ballinger and Korey DeSoto on a live-stream, he started talking to her in 2016. Gradually, the woman behind Miranda Sings started to disclose private information of her life to Adam, who at the time was just 13 or 14 years of age. The personal details involved her divorce with her ex-husband. Obviously, this was information that he could not easily process and it’s a lot for something to process when you’re just thirteen. Though Adam himself says he was just a young naive kid at the time and let it go. Moreover, Colleen even used him to find information on her ex Joshua Evans:

Our relationship slowly turned into me always being asked to go find drama for whether it was about Josh, friends, or fans. At the time I saw this is harmless. I was just really excited that my favorite person in the entire world wanted to talk to me. Now, looking back though I can see that it was just a way of baiting me to constantly get me to get her the information.

Then Colleen started to ask him for ideas on how to run her Miranda Sings social media accounts. After that, Colleen gave the credentials to the accounts to Adam who took the job passionately. Here are some of the samples of the work that he did for her: 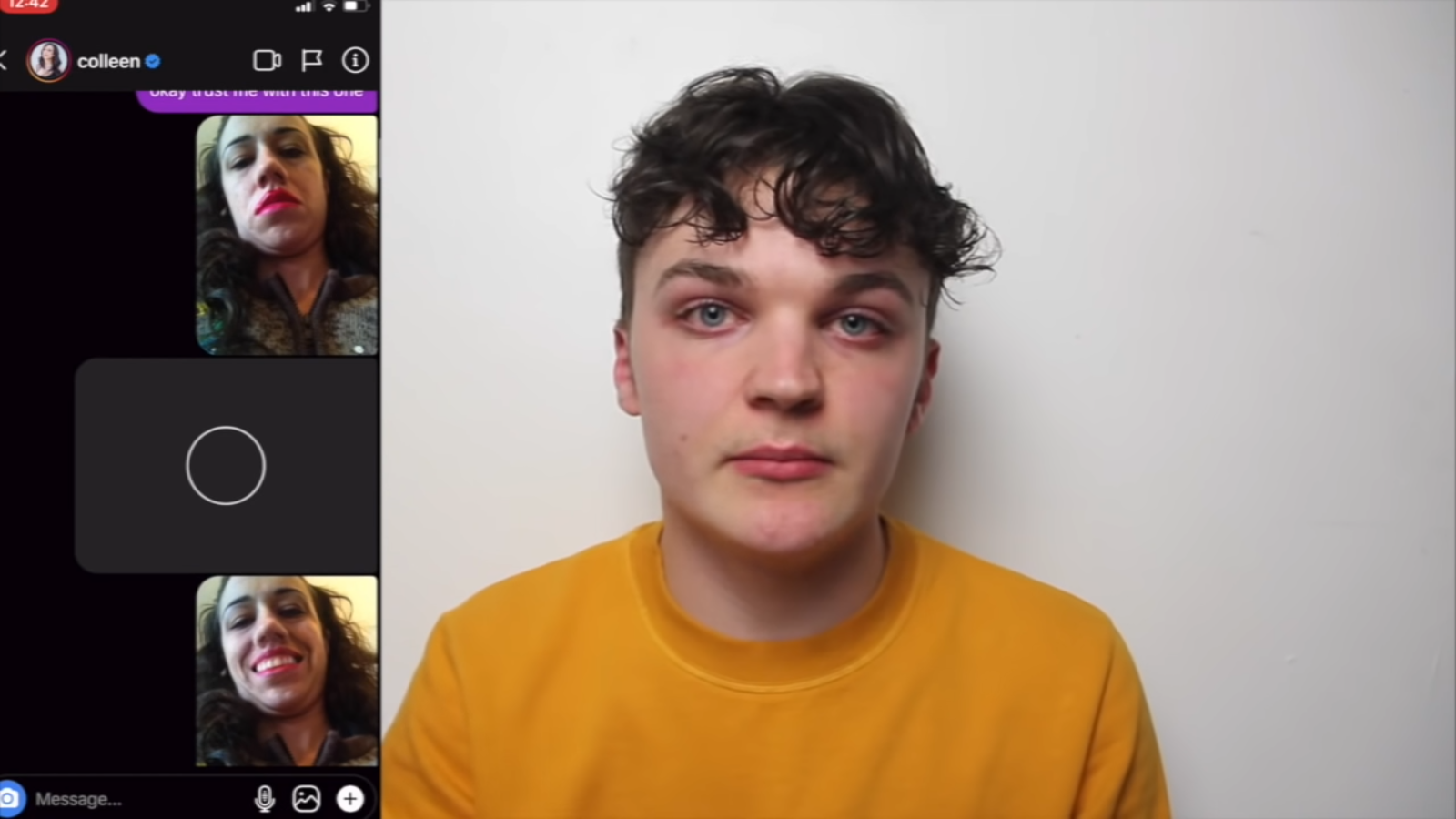 He was in fact so excited about the engagement he was generating for Miranda Sings account:

Colleen is definitely approving all his work:

Adam McIntyre explains that he sent all of the tweets and social media posts to Colleen before posting them on the account. Though one of the tweets got some backlash and Colleen Ballinger got really worried about it:

Colleen’s DMs show that she was aware of what happened and that she urged Adam to be careful. Adam ended up apologizing for it and Colleen later deleted the tweets and then apologized for them:

Then later she told Adam to get her to approve of the content first before posting it. Adam in the video states that he did that before as well. The controversial tweet that he made out was in fact approved by Colleen Ballinger.

During this Colleen even talked about how she was considering hiring Adam properly to work for her part-time.

However, when the tweet scandal happened Adam ended up logging off from all the accounts after apologizing for them to her. After that, she stopped DMing him and didn’t talk to him afterward.

But after a while, Adam got to know how Colleen and Korey were starting rumors against Adam and talking negative and hurtful things about him. After this, Adam McIntyre messaged Colleen this:

As per Colleen, the live-stream in which Colleen and Korey were joking around and sending Colleen’s fans her stuff was when she first connected with Adam. Colleen Ballinger admits that she did send the unused new pair of lingerie that she did not like to Adam McIntyre when he was a minor. Colleen talks about how she realizes now that it was a very stupid joke. She says Adam asked them for it.

this boy who made this video [referrinfg to Adam] about me recently he asked for the underwear – because it was so ridiculous and funny we laughed about it. And I forgot to send them to him and eventually, he tweeted me asking me for them again. I sent them to him.  He put them on over his clothes and posted about them it was like a big joke within the fandom.

As per Adam, he never asked for it, and was told to do it by Colleen and Kory:

I’m confused honestly they went on my Twitter because they thought it was funny. And then they said they had to send me the bra and panties.

Colleen Ballinger did apologize for not thinking smartly and sending him the lingerie. (Whether or not whose idea it was, she should not have and it’s brave of her to admit it).

in hindsight, I see how it was completely stupid of me. I should have never sent that. I don’t know what part of my brain was missing at the time. That I thought. ‘oh this is a normal silly thing to do.’ I should have realized and recognized how dumb that was. And never sent it to him. No matter how much he asked. But it was never a sneaky creepy gross thing that I was doing in secret. It was a silly stupid mistake that now is being blown way out of proportion.

It’s not clear who is stating the truth as both sides of the story differ.

Though, Colleen claims that she only gave Adam the account details for 1 day and not years!

Colleen claims that she only gave Adam access to the Miranda Sings account for just one day and not a couple of years:

I think is important to address from his video is that he did have access to my Miranda sings Twitter account for one day, not four years.

This is something hard to believe in if we are to believe Adam McIntyre’s screenshots. All of the conversations that they had could not have occurred over just one day. It would have happened over time.

Moreover, she said that she loves asking her fans to share advice and ideas to her regarding the Miranda Sings content.

he has included in that I used a couple of his tweet ideas many years ago. They did really well. He was super funny and since then he’s asked me multiple times if he can help me out with social media again. I always thought that was really really sweet. But most of the time I did not engage in those conversations.  Until recently a couple of months ago he reached out to me and brought up the fact that the Miranda accounts hadn’t been as active as they used to be.  And how he wanted to help me do more social media stuff so he sent me a whole bunch of edited photos that he had.

So Colleen Ballinger shares that he sent her some edited photos and some tweets. Hence, she gave him access to the Miranda social media accounts since she was exhausted to do it herself. She wanted to do this as a test-run. As per her, there was also a tweet that gained some controversy:

It’s commendable that Colleen admits that it was her mistake for not reviewing the content her sent to her. However, Adam says she did actually see the tweets and laughed at them too.

She does not put any blame to Adam McIntyre:

I put zero blame on him at all it was my fault I knew better than to let someone else tweet for me I should have reviewed closely every single thing that was going to come out of Miranda’s mouth.

Furthermore, she wishes Adam nothing but happiness and success. She also shares that she wants everyone to move on from this drama. Another thing to note here is that she did include in her own screenshots of the conversation because Adam is still a minor.

She also got into how she was confused about why Adam’s mother was feeling uncomfortable towards her. Colleen thought Adam’s mother was happy her son was connecting with Colleen. Though, that was cleared out by Adam who said his parents weren’t comfortable with Colleen sharing personal details about her divorce to Adam who was just below the age of 15. Not only that, but Colleen sending Adam lingerie was something that angered them as well. The rest of the video we see Colleen apologizing for her other problematic behavior such as her racist and body-shaming remarks.

Verdict | Did Colleen use Adam?

Colleen Ballinger still did not address that she was spreading hate towards Adam during this time. Suffice to say, this feud has left many confused about who to believe and who to trust.  Colleen does admit to using Adam’s ideas but she says she used to do it with all her fans. As per Adam, he was working hard for the Miranda Sings account and was dedicated to the job and would spend a lot of hours on it. He was not paid for any of it and did not get many benefits from it either.

But it seems as if Colleen is choosing to admit her past mistakes (even if they’re not addressing everything) and choosing to correct herself. Let’s hope Adam and Colleen resolve their issues completely off-screen.

Adam McIntyreColleen BallingerFeudMinorMiranda SingsSocial MediaYoutuber Drama
0 2,181
Share
Subscribe to our newsletter
Sign up here to get the latest news, updates and special offers delivered directly to your inbox.
You can unsubscribe at any time

Top 5 TikTokers who are not following social distancing rule