Lili Reinhart lashes out at fans’ criticism of her poetry

Riverdale’s Betty Cooper is probably one of the better characters on the show. In spite of the show’s plotline not making much sense anymore, their cast is the reason fans are still hooked on the show! Lili Reinhart, Cole Sprouse, KJ Apa, Camila Mendes, Madelaine Petsch, and others make for an amazing cast crew. Their friendship extends beyond the show. And we love it! The entire cast is very active on social media. They make it their business to keep fans in the loop of whatever is going on in their lives. Lili Reinhart to be specific is bored in Quarantine. She has talked about how she forgot the time she did not wear sweats. As you may know, Lili has her poetry book called Swimming Lessons coming up! The book is available for pre-order now!

In a recent tweet, Lili Reinhart shared a piece of her poetry in a tweet (the tweet was soon deleted). And why it was deleted? Because some fans openly talked about how the poetry she tweets is not poetry. 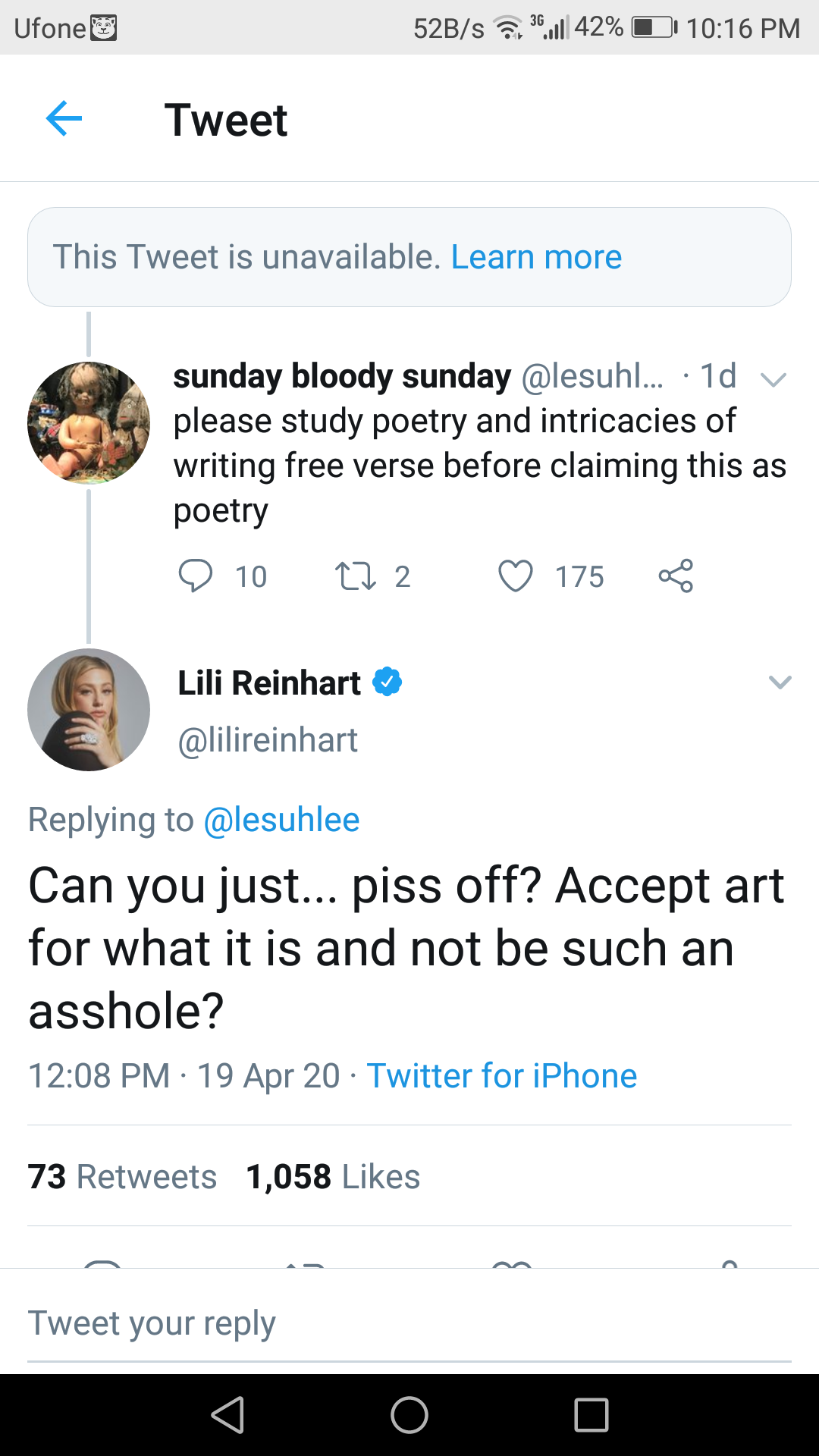 So the fan responds,

please study poetry and the intricacies of writing free verse before claiming this as poetry.

Lili Reinhart was in no mood to accept criticism.

Can you just… piss off? Accept art for what it is and not be such an asshole?

If you’re an asshole, I highly recommend getting a dog. They will soften your soul!

The actress is also offering advice to the ‘assholes’ who are offering her criticism. Lili Reinhart then focuses her attention on Twitter as a whole.

Twitter is actually the most toxic form of social media. People are assholes, for the sake of being assholes. Do you not understand the concept of karma?

It’s fine. You will understand when it bites your miserable ass.

Lili Reinhart is pretty fueled up. So we do know now that she is not one to take criticism lightly. We do wonder how it is going to be once her book actually comes out.

Lili ReinhartLili Reinhart poetryPoetry
0 1,115
Share
Subscribe to our newsletter
Sign up here to get the latest news, updates and special offers delivered directly to your inbox.
You can unsubscribe at any time

Did The Beatles Make This Song On The Drug LSD?