Many fans got worried for Charli D’Amelio and Chase Hudson after the breakup rumor hit the news. Charli and Chase have been dating for quite a while and fans really shipped them together. However, things took a turn when Chase sent an image of his private parts to Nessa Barrett (Josh Richards’s girlfriend). The caption on the image apparently said “still softi’sh” due to which Josh ended up making a diss track with Bryce Hall. They also highlighted how Chase is cheating on Charli while claiming he still loves her. Fast forward to April 14, the famous TikTok couple has finally confirmed the rumors.

On April 14, 2020, both Charli D’Amelio and Chase Hudson announced their breakup officially on their Instagram stories. What seemed like a one-sided breakup during the past few weeks, is actually a mutual decision. In fact, Charli and Chase have also shut down the rumors that they will never be seen together again. They still have love for each other and they’ll stay friends forever. 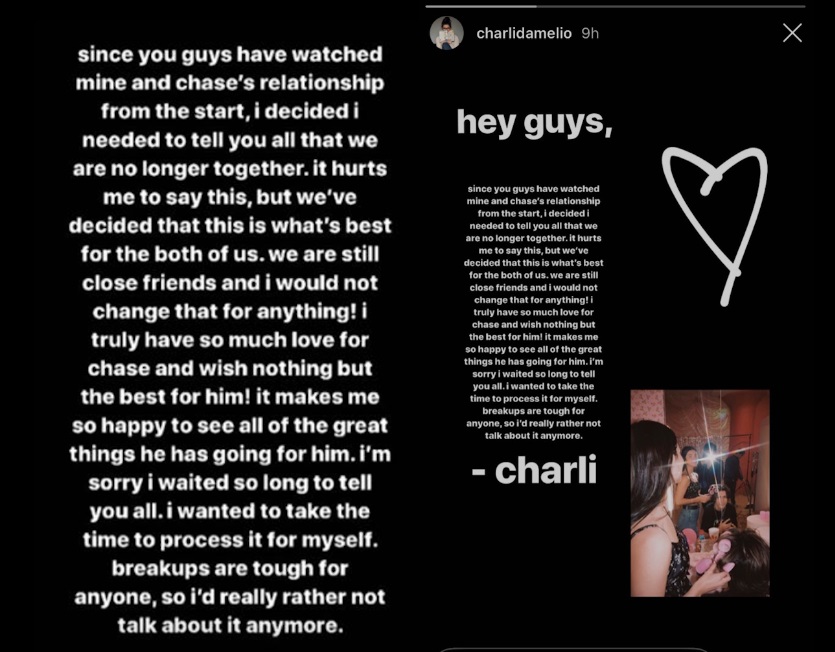 She confirmed she was going through the post-breakup tough phase due to which she couldn’t announce it to her fans. 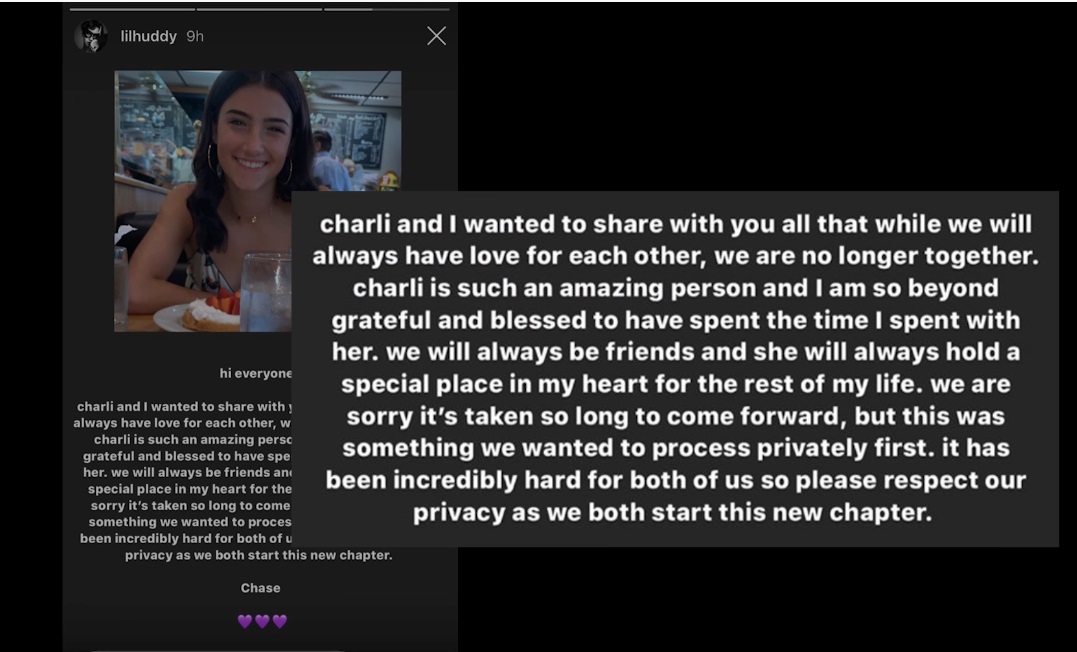 While many people still say both of them are too young to be in a serious relationship, this step has shut down many critics. They might not have called it “official” on their social media handles. However, they have announced the breakup officially, shutting all the rumor mills.

Chase Hudson recently posted an interesting Instagram story. While that was just him being his normal self, however, the song selection does feel like a throwback to all the good times Chase and Charli D’Amelio enjoyed together. It’s K. by Cigarettes after sex. And the lyrics used in Chase’s story are:

I remember when I first noticed that you liked me back
We were sitting down in a restaurant waiting for the check
We had made love earlier that day with no strings attached.

Related: Fans are shipping Charli D’Amelio with Chase Hudson after this video

Bitter-sweet memories. He also tweeted to confirm that this song has a special place in his heart.

a song i hold dear to me.

Chase Hudson has also shared his Spotify playlist with his fans.

We wish them all the best for their bright future ahead.

Related: Charli D’Amelio shuts down body-shamers
Charli D'AmelioChase HudsonHype House
0 1,018
Share
Subscribe to our newsletter
Sign up here to get the latest news, updates and special offers delivered directly to your inbox.
You can unsubscribe at any time