While Selena Gomez is dropping her songs back to back and keeping her fans busy with the easter eggs and puzzles, her latest shoot is driving the internet crazy. Selena spent most of her time to herself during the past few years. However, she is back now and she is back with full force. While her latest songs are climbing the charts, her ravishing pictures from a recently shared shoot are building a stronger fan-force. However, there are some people who highlighted the makeup used in her shoot. And now, many are accusing her of blackfishing.

At just 27, @selenagomez is a global pop star, a tabloid fixture, a documentary and TV producer—and a philanthropist who has shifted her attention to coronavirus relief efforts. Following a well-documented struggle with mental and physical health, she has returned stronger than ever with the cathartic and confessional “Rare,” her third number-one album, and as she tells her friend @amyschumer in our new Spring Issue, she is done letting people control her narrative. Tap the link in our bio for the full story.⁣⁣ ⁣ Photographed by @elirusselllinnetz and styled by @melzy917.

While the interview covered many aspects of Selena’s life, it also focused on her upcoming makeup collection.

I wanted to start a conversation about how can you make yourself feel great. It’s not necessarily about needing these things to make yourself feel beautiful. People of my generation have all this pressure to look a certain way, and I wanted to make a line that took away a bit of that pressure. I use real people in the campaigns. I have 48 shades of foundation and concealer. It’s all very clean and easy. I wanted people to feel safe.

However, that response and her shoot pictures are receiving backlash now.

Fans react to her shoot

While Selena Gomez does look pretty and different in her pictures. There is no denying that her pictures do appear to be a bit “tanner” than she already is. Fans were quick to point it out. And they are not happy at it. Some are even asking others to give her the same treatment they did to Ariana Grande. 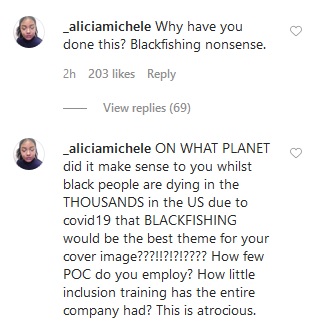 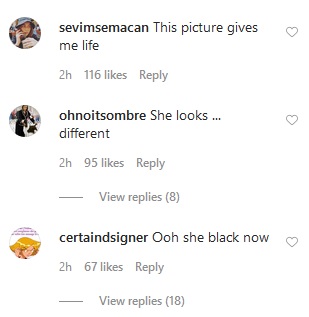 Twitter is going cray-cray on her looks as well.

She’s not usually this dark tho.

Do you think her makeup artist over-tanned her or was it the lighting issue? Let us know in the comments below.