Dixie D’Amelio, the famous TikTok star, is not just famous for her dance collaborations with her sister Charli D’Amelio. She is also famous for her humorous tweets that keeps her fans entertained. When Charli and Chase Hudson’s breakup rumors were in the air, she posted about Charli’s current condition, saying: she’s just soft. While her TikToks keep people entertained, one of her recent videos surprised her fans. Forgetting that they forced Dixie to come out.

Just a week ago, Dixie posted about how people assume her every move to be something else. Like, she cannot even dye her hair without people assuming it’s something to do with her sexuality.

Her fans are confused and they claim they have a reason. Since the day Dixie D’Amelio got famous, people have been asking her about her sexuality. Unlike her sister Charli D’Amelio who was (and probably still is) dating Chase Hudson, Dixie has not talked about her relationship status.

So, fans started to believe their assumptions, that Dixie gives bisexual/lesbian vibes. They find her voice raspy as compared to other girls, she mostly dresses up casually, she has tomboyish vibes. After she posted a TikTok on her profile in January, Dixie’s fans made a firm belief that she’s bisexual. 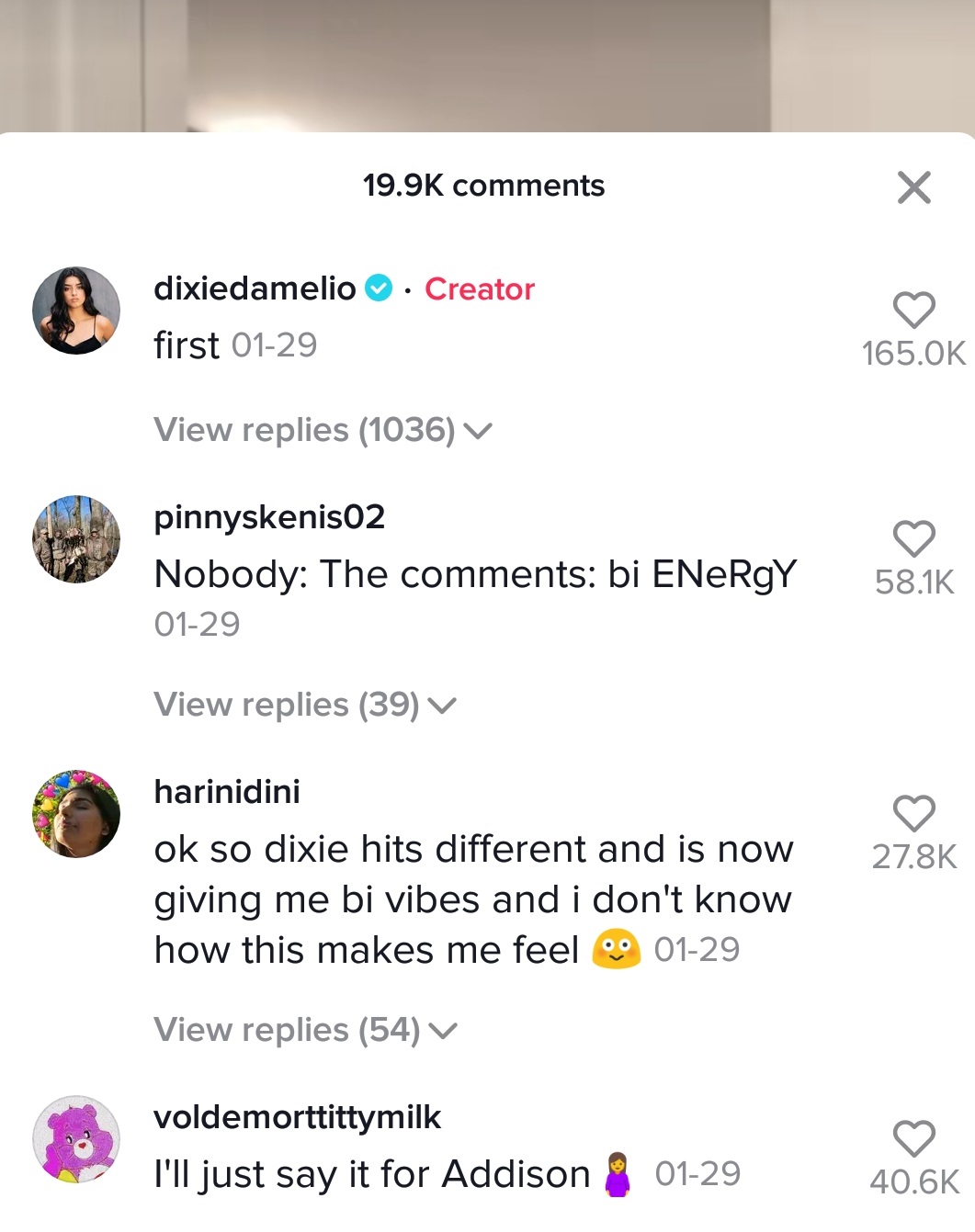 Yeah, some believed she is dating Addison Rae. So, Dixie and Addison started to play along and fuel the dating rumors with their TikTok collaborations.

Meanwhile, her TikToks with Sway House’s Griffin Johnson are another thing bothering the fans. The same fans that believed that she is from the LGBTQ community. They thought Dixie’s touchy-feely TikToks with Griffin are just to make a point that she is not gay.

After months of everyone questioning her sexuality and forcing her to come out, Dixie D’Amelio finally posted this TikTok that’s supposed to settle the storm.

That’s one hell of a creative way to come out and we love it. Showing her support to the whole LGBTQ community by wearing a rainbow-colors themed hoodie, Dixie chose the song Kolors by Monte Booker. The lyrics in the TikTok say:

And she straight from California
Freaky as she wanna be
Told me she like boys and girls
Oh well, that’s okay with me.

And if you look closely, Dixie is lip-syncing “boys” only. Yes, she is straight. Dixie even tagged Gabe Fernandez, the tiktoker who used the same music multiple times with text that Dixie might be bisexual.

Well, Gabe just lost his sh*t. And Dixie’s assumed boyfriend Griffin Johnson is pretty happy to find it out.

And Dixie liked Griffin’s comment. I don’t know about you but I totally ship this non-couple-please-be-a-couple couple. They look so cute together.

Anywhoo, y’all out there pressurizing people to come out, stop it. Whether it is Dixie or any other influencer/celebrity, there is no “age” of coming out. They can and they will whenever they feel comfortable. Dixie was forced to come out and she was not happy with it.

Related: Manny Mua, James Charles & Tana Mongeau Crush On ‘Manly’ Dixie D’Amelio
Charli D'AmelioDixie D'AmelioGriffin JohnsonHype HouseSway HouseTiktok
4 65,559
Share
Subscribe to our newsletter
Sign up here to get the latest news, updates and special offers delivered directly to your inbox.
You can unsubscribe at any time