Dwayne “The Rock” Johnson has made it big, both in Professional Wrestling and Hollywood. He is one of the highest-paid actors in the world. Still, he acknowledges his wrestling roots every chance he gets. He recently uploaded a video on his YouTube channel for the same purpose. In that video, he revealed an interesting story about his match with Hulk Hogan at Wrestlemania X8 in 2002.

Related: Dwayne Johnson’s Black Adam | What We Know So Far?

The Rock vs. “Hollywood” Hulk Hogan: Icon vs. Icon!

For those of you unaware, this clash changed professional wrestling forever. In the late ’90s, Dwayne Johnson (The Rock) became an integral part of the World Wrestling Federation (now Entertainment). Hulk Hogan, on the other hand, had left the company a few years prior to sign with World Championship Wrestling.

WWF bought WCW in 2001 and Hogan decided to return to the former shortly after. A number of dream matches for Hogan were on the horizon. One of these matches was against The Rock. Both parties agreed to go forward with the match which was billed as “Icon vs. Icon”. The “rivalry” started in early 2002 after Hogan returned to WWF.

Related: Dwayne Johnson Spills Tea on his Favorite Role that he lost to Tom Cruise!

Everyone knows by now that professional wrestling is scripted. The outcome of a match, in most cases, is already known to all participating performers. This wasn’t the case with Rock/Hogan, however.

While in quarantine due to the coronavirus pandemic, Dwayne Johnson has been uploading a lot of “Q&A” videos on his official YouTube channel. In one of these videos, he talked about his match with Hulk Hogan at Wrestlemania. Even though “The Great One” would go on to win the match, he revealed that he didn’t know about it until it actually happened. Everything from how the match would go on to who would emerge victorious was left for “The Hulkster” to decide. 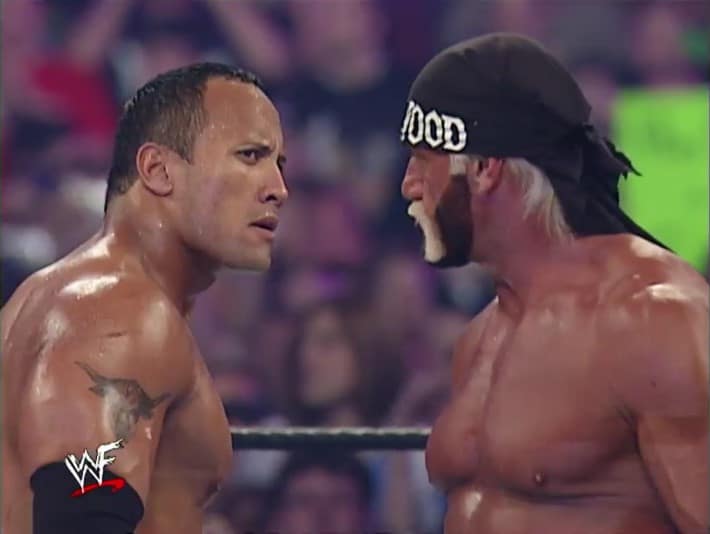 Moreover, Johnson recalled how the audience was confused between cheering for Hogan or himself. Hogan, even though a villain or “heel” at that time, was a returning legend after all. So, the fans weren’t ready to “boo” him. Johnson, on the other hand, was playing the babyface (professional wrestling term for a hero) in the match.

Realizing that the fans in attendance couldn’t choose between the two, the Fast 5 star made things easier. He decided on the fly to act as the “heel” in the match. This made Hogan the fan-favorite. The match ended when “The Brahma Bull” hit Hogan with his finisher “The People’s Elbow”. The WWE Hall of Famer then whispered, “This is it; Go home”, signaling the referee to count to 3. And Dwayne Johnson emerged victorious!

He mentioned how he thanked Hogan by giving him a tight hug once they got to the backstage area. Additionally, the match was all over the news the next day.

Have you watched the iconic Wrestlemania match yet? If not, we suggest you do so, even if you are not a big wrestling fan. It will surely be a treat during times like these!