Well, it was just yesterday when we were guessing why Trisha Paytas is trolling her fans these days. She is spending her quarantined life with an alleged new boyfriend. And that is exactly how she is trolling her fans, especially those who applied for her The Bachelorette being run by hehe productions. Ethan Klein and Hila Klein released the second episode of The Bachelorette about a week ago. Trisha Paytas was there as well. And they all were looking at the possible prospects. However, since everyone is in quarantine now, the podcast show was supposed to be delayed I guess. But Trisha was not buying that because she cannot wait when it comes to finding her new ‘love’. She personally contacted Hila Klein’s brother, and also shared a picture with him on her Instagram. Well, H3 podcast is done with Trisha. And they are finally exposing her.

Related: Trisha Paytas Is Trolling Her Fans Again With A New Boyfriend?

Trisha Paytas is not just trolling her fans, she is also trolling Ethan Klein and Hila Klein. Her alleged new boyfriend, Moses Hacmon, has not really confirmed anything on his Instagram profile yet. But Trisha is persistent to prove that he is the one she is quarantined with.

While she never really shows his face whenever they are together (probably 24/7 as per Trisha’s claims), if it’s really him then get ready for a chain of YouTube vlogs from Trisha in the future.

When they started it, they must have hoped to bring the show to a remarkable end. Everyone dreams of making a reality show (take Tiger King for example). But their dreams do not always come true. Now that Trisha Paytas has ‘really’ started dating Hila Klein’s brother Moses, Ethan and Hila had to expose her.

In the latest podcast titled Trisha Paytas Ruins The H3 Podcast, Ethan and Hila spill the tea on the whole scenario. Ethan said he really had to vent because his viewers were excited for the bachelorette.

We went through first two rounds. We saw a bunch of videos of people who wanted to be with Trisha. And we told her that if someone reaches out in the DM just let us know.

H3 Podcast season 1 of bachelorette was ruined because the main person (their employee) fell in love with a girl in his DMs. Ethan Klein and Hila Klein did not want history to repeat itself. Even if Trisha was having a private conversation with someone she was interested in, she had to bring it on the show as a wildcard.

They were actually planning to have Hila Klein’s brother Moses Hacmon to be the bachelor in season 2 before Trisha Paytas. And the rules were the same, if he was going to be involved then there should be no shenanigans. And Moses swore that it’d be all about making the show better.

Ethan and Hila knew that Moses would most probably apply to Trisha Paytas’s bachelorette.

He wanted to do it as a goof, that’s what I [Ethan] thought, if I’m being honest. Just to spice up this shit.

But they skipped the protocol, and started talking in DMs directly. Trisha Paytas wanted him to apply because she liked him.

Now I find out that they have been talking in the DMs on Instagram.

And what was shocking for them was, even Hila Klein did not know anything about it. Neither Trisha nor Moses told her anything. Apart from one thing, Moses did inform Hila that he and Trisha spoke in DMs. And that was it. And he promised he won’t let anything happen to the show. After that, they had a power outage for a full day because of the rain. And they were quarantined as well. Not even the internet. The next day, they got the power back, they opened their Twitter and saw Trisha’s picture with Moses.

Ethan Klein says he does not know what Moses is up to. And it is not an inside joke. He really does not know anything at the moment. Ethan believes that Moses’s smile in the picture depicts he is goofing them.

Bro, what are you doing?

Ethan Klein further added that Trisha Paytas has been wanting to come to their house and babysit his son Theodore. So this way, she can come as Moses’s girlfriend. But Hila Klien claims it is not happening. She will not be allowed to come. Ethan even contacted Moses to ask him about what the f*** was happening. And Moses remained cryptic. Moses told Ethan:

Yeah, we hung out a few times.

They are more disappointed in Moses because he was supposed to be on their side. But now they do not know whose side he is on. About Trisha Paytas posting cryptic images on her Instagram stories, it was hard for Ethan to figure out whether the guy in the pictures was really Moses. However, Hila Klein decoded it for everyone. She knows her brother, and she confirmed that there were his stickers beside the “date dinner” on the table. The bachelorette was already on hiatus.

As per Ethan, Trisha just wants to f*** Moses. Is Moses playing Trisha and Kleins? Ethan even thinks that Moses likes Trisha but would not admit it.

A lot of reputable, successful, seemingly normal people have dated Trisha. She’s not my type but clearly a lot of guys would like to date her.

Initially, Trisha Paytas posted her picture with Moses Hacmon on Instagram and Twitter. And after seeing it, Ethan Klein was shook. And then the chain began. Trisha posted “my love” in Hebrew. But probably she did not know what she posted is gendered for females. 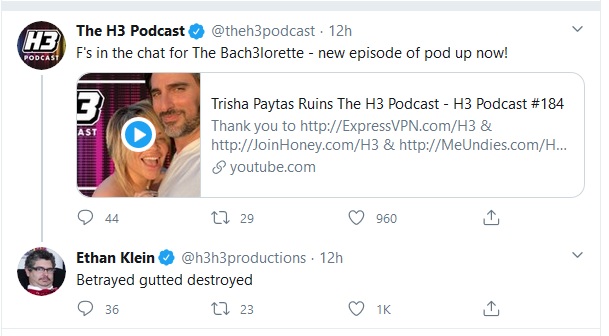 And then Trisha Paytas couldn’t resist dropping another picture with Moses Hacmon. Ethan Klein has canceled the bachelorette. Hila says their life is ruined now. Here are a few clips from their podcast:

Trisha Paytas is definitely trolling them.

And here’s what Ethan had to say. You can watch the whole podcast here. Do you think Trisha is going to post more pictures with Moses? Let us know in the comments below.

Related: Trisha Paytas Engaged to Boyfriend Moses Hacman
Ethan KleinH3 PodcastH3H3Hila KleinMoses HacmonTrisha Paytas
0 11,273
Share
Subscribe to our newsletter
Sign up here to get the latest news, updates and special offers delivered directly to your inbox.
You can unsubscribe at any time