Was Daenerys The Bernie Sanders Of Game Of Thrones?

You know, before she burned all of King's Landing of course...

Daenerys Stormborn of House Targaryen was one of the most dominant figures in Westeros. She was a breath of fresh air in a largely feudalistic society. In some ways, she challenged the existing status quo quite well. But, does that make her the Bernie Sanders of Game of Thrones? Let’s do a comparison!

A Comparison between Bernie and Daenerys

Firstly, we’ll only use content from the show. We are NOT using book Daenerys for this comparison, because she was a whole other character compared to show Daenerys. Now, as comparisons go, we’ll be talking about the similarities first, then the differences. Therefore, let’s take a look at the similarities between Dany and Bernie Sanders first!

1. Both asked for Financial Support

We all know how Daenerys, at the beginning of the show, was begging for financial support all over Essos. She asked for it from Xaro Xhoan Daxos in Qarth and many others at Slaver’s Bay too, in the form of ships to take her to Westeros. Similarly, we constantly see Bernie Sanders asking for financial support too. So much so that he made a meme out of it! And let’s not kid ourselves, he constantly brags about how his average campaign donation is $18.53. Therefore, we can say Dany and Bernie have that in common. 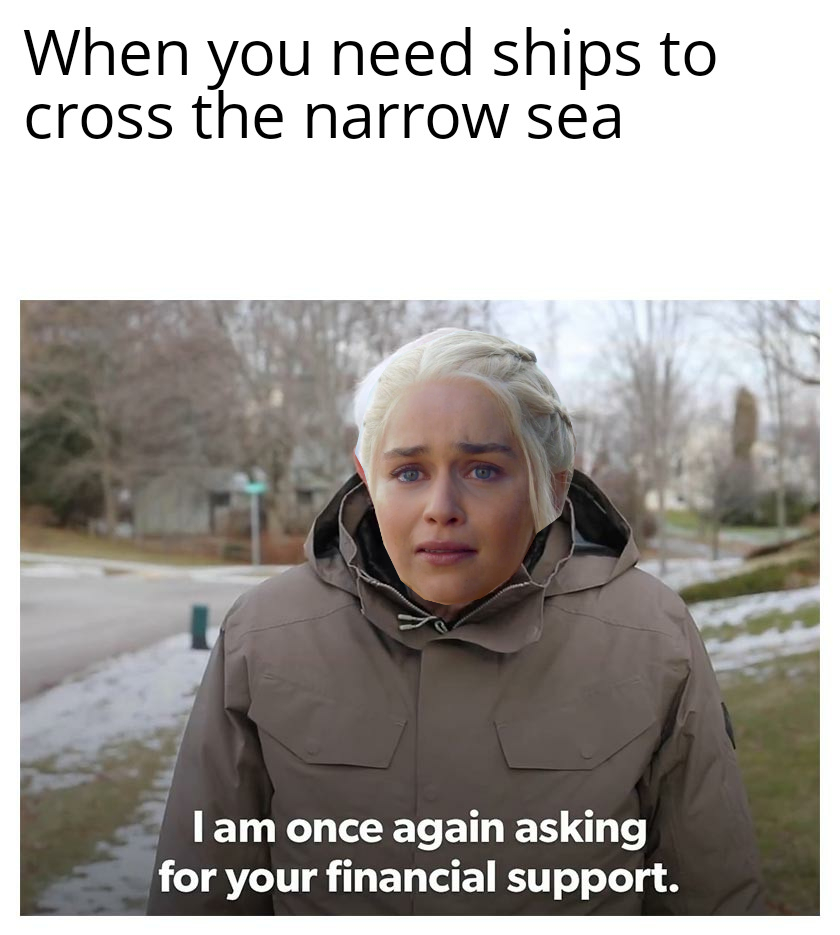 2. Both wanted to break the ‘wheel’

Let’s face it. Both Bernie and Daenerys wanted to beat the status quo, or as Dany put it, the ‘wheel’. Her famous quote still rings in the ears of fans:

Lannister, Targaryen, Baratheon, Stark, Tyrell, they’re all just spokes on a wheel…
I’m not going to stop the wheel… I’m going to break the wheel!

And I don’t think any of us needs to know how much hatred Bernie has for the status quo. He is not in favor of a capitalist regime. So in this case, it’s a match made in heaven.

3. Cared for and believed in the masses

We all know how much Bernie Sanders loves the masses. His entire movement is based on socialist populism and shows a massive belief in the will of the masses. Similarly, Daenerys has also shown a lot of love and care for the masses and gotten it back from them too. After all, she wasn’t given the nickname “Mhysa” for anything.

4. Against Slavery of all kinds

Slavery is one thing both Daenerys and Bernie can agree on without even a question. Of course, its meaning differs for the two. For Dany, slavery means indentured servitude, but for Bernie, it means that, plus corporate slavery too! As Khaleesi, Daenerys made her intentions quite clear about slavery, saying:

Let the priests argue over good and evil. Slavery is real. I can end it. I will end it. And I will end those behind it.

I guess that makes it pretty clear that Daenerys won’t just end slavery, but the slave masters too. Adding to that, Bernie says this about corporate slavery:

I believe that the vast majority of the people of the world and of this country are living in a slave-like condition not terribly different from what existed in this country before the Civil War.

What’s not in common?

1. Daenerys’s not a big fan of democracy

Daenerys might be a big fan of the poor and needy, but maybe not a big fan of empowering them with decisions. She’s always been a huge fan of the Iron Throne and keeping it for herself. Despite the talks of breaking the wheel, she never really gave a more inclusive alternative to that wheel. Dany always maintained that she would replace those houses with ones that are loyal to her. So, the feudal system remains intact. After all, she was very possessive of her throne, often saying:

I will take what is mine with fire and blood.

That doesn’t sound very democratic if you ask me, which is something Bernie Sanders would never agree to.

Oh, we all know how Daenerys can be quite into avenging her wounds. She’s made it abundantly clear many times:

And I swear this. If you ever betray me, I’ll burn you alive.

When my dragons are grown, we will take back what was stolen from me and destroy those who have wronged me. We will lay waste to armies and burn cities to the ground. Turn us away and we will burn you first.

Yikes, that’s a lot of burning… and she demonstrated a taste for it as well in that controversial season finale. However, Bernie Sanders is not at all like that. In fact, after a heated contest with Hillary Clinton in the 2016 Democratic primaries, he openly endorsed Clinton and campaigned for her way more than he needed to. And chances are, he will support Joe Biden for the 2020 US Elections, provided that Joe wins the 2020 Democratic Primaries (which he probably will win)

3. Bernie can never be genocidal!

I mean, that much is obvious! Right, guys? Even if he had a fire breathing dragon that could swallow a horse in a gulp, he would never burn an entire city even if it was filled with Republicans. However, we cannot say the same about Daenerys…

Well, Daenerys kind of made it abundantly clear, didn’t she?

They can live in my new world, or they can die in their old one.

She had a zero-tolerance policy for anyone who lived by old allegiances. And she demonstrated that by burning Randyll and Dickon Tarly alive in season 7 of Game of Thrones. I mean, sure Bernie wants to set the elite class straight but burning them at the stake might be a bit too much.

Related: Margaery Tyrell | Could She Have Won Game Of Thrones

Our Verdict on Daenerys

Simply put, NO. Bernie and Daenerys might have some things in common, but the differences are too massive to be ignored. In fact, the difference is so fundamental in nature that it’s a bit difficult to put the two in even the same bracket.

Yes, had the ending been slightly different, like 500,000 people not being burnt alive then a case could have been made. Or if Dany introduced some kind of voting or enfranchised some of the populations. However, she didn’t do both. So it’s safe to say that Dany is not the Bernie Sanders of Game of Thrones. And for that, we wish Bernie the best of luck for the Democratic Primaries and US Elections of 2020!

Related: Is Bernie Sanders Giving Up On His Presidential Campaign?
Bernie Sandersdaenerys targaryenGame of ThronesKhaleesiUS Democratic PrimariesUS Elections 2020
0 1,179
Share
Subscribe to our newsletter
Sign up here to get the latest news, updates and special offers delivered directly to your inbox.
You can unsubscribe at any time

Is The Weeknd’s Album A Tribute To Bella Hadid?

Amber Heard cuddles up to Elon Musk in leaked images