Alissa Violet & FaZe Banks Back Together? YES, say the Rumors!

To say that nothing is impossible seems like an understatement at this point. Of all the things that we thought wouldn’t happen, seeing Alissa Violet and FaZe Banks together was definitely on the top of the list. However, if rumors are true, the FaZe Clan founder and Jake Paul’s ex have patched things up!

Related: Tfue & FaZe Banks’ Friendship is Back On, Courtesy of Tom Brady?

Last summer, the Clout House lovebirds broke up after being in a relationship for about 2 years. While Banks claimed that it was a mutual decision, things turned ugly pretty soon. Replying to a Twitter post in December, the former Team 10 member revealed that the FaZe Clan leader actually cheated on her.

Banks, on the other hand, didn’t sway into the emotions and prevented the matter from getting uglier. Since then, both have been doing their own things until recently when certain clues emerged, hinting that the internet stars have patched up.

Keemstar (host of Drama Alert) had some interesting details to share in one of his recent videos. While discussing Alissa Violet’s Instagram story on advising her fans to stay in quarantine, he pointed out that the bed board behind Violet looked quite familiar.

In fact, the bed board looked exactly similar to the one shown in the new FaZe House tour video. In the same video, you can spot Alissa’s bag (one that she sports in her Instagram posts) in Banks’ bathroom. 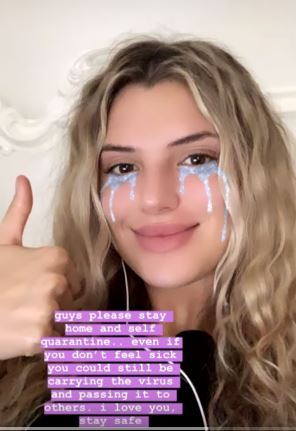 While these clues don’t confirm anything, they surely raise a lot of questions. After her dating experiences with the likes of Jake Paul and FaZe Banks, it will be pretty hard to believe that Alissa Violet will even visit the FaZe house, let alone reunite with her ex there.

So, do you think that the two YouTubers are back together? Or are these just some weird coincidences? Let us know what you think!

Alissa VioletCelebrity Break-upsCelebrity YouTubersFaZe BanksFaZe Clan
0 7,598
Share
Subscribe to our newsletter
Sign up here to get the latest news, updates and special offers delivered directly to your inbox.
You can unsubscribe at any time

You can reach him at realalisiddiqui[email protected]

Aaron Carter’s Ex-Girlfriends Are Uniting Against Him

Tokyo Olympics 2020 have been finally postponed

How YouTubers Are Reacting to Netflix’s Hype House Reality Show