Aaron Carter’s Ex-Girlfriends Are Uniting Against Him

Just a few days back, Aaron Carter (Nick Carter’s younger brother, and a singer) had a fight with his girlfriend, Melanie Martin. What makes this fight stand out is the fact that it was live-streamed on his Instagram. After a couple of hours, Melanie changed her Instagram profile image to an inappropriate explicit one, confirming they broke up. She also posted on her Instagram stories that the town looks like a ghost town at the moment due to COVID-19. She was looking for a gas station. The next day, she was back to Aaron. And he now says that it was all “staged”. It was not. All regular viewers can confirm that. Since Melanie Martin and Aaron are proving they are “meant” to be together, all the ex-girlfriends of Aaron are uniting against him to spread awareness.

The Girlfriends Are In Action

Last year, Aaron Carter broke up with Lina Valentina. He gathered many sympathies from the people by claiming that she slapped him. In fact, he also applied for a restraining order against her. However, his request for getting a permanent RO was dismissed when he did not show up at the court.

After breaking up with Lina, Aaron hooked up with Trisha Paytas. Later, he dated Jenna Shea for a couple of days. What most of the people do not know is, there was another girlfriend back in the days, Abba. However, she wanted too much “love and kisses” and Aaron claims he needed space.

Now, Jenna Shea, Lina Valentina, and Abba are supporting each other. The ladies are on a mission, and that’s to prove Aaron Carter does domestic abuse. Is Melanie Martin in trouble?

Since the day Melanie Martin has returned, Aaron Carter was posting partially sweet live streams from his home studio. He loses control whenever someone says something triggering. Question is, he accused Melanie of cheating on him. How can everything come back to normal in a day? If that fight was staged then why they are getting rid of Melanie’s dog. Yes, you all must have seen Melanie Martin’s dog with Aaron Carter’s. But now, he removed the dog from the house. Aaron confirms they are getting a new pet, and they’ll name it Dior. In 4 weeks they’ll have the dog with them.

He further confirmed that Melanie’s dog was from a previous relationship, so he cannot keep it. It either goes to Melanie’s ex, or Aaron finds it a new home. What about Nala?

Related: Aaron Carter abuses, degrades and kicks Melanie Martin out of his house?

While Melanie Martin has not come up with any physical evidence yet, ex-girlfriends are done staying silent. Lina Valentine posted this on her Twitter:

I have a little time, just might call every shelter in LA county today #QuaratineLife

This does seem like a direct shade at Aaron Carter. Moreover, she also commented on a tweet, confirming a new video will be out soon with receipts against Aaron Carter: 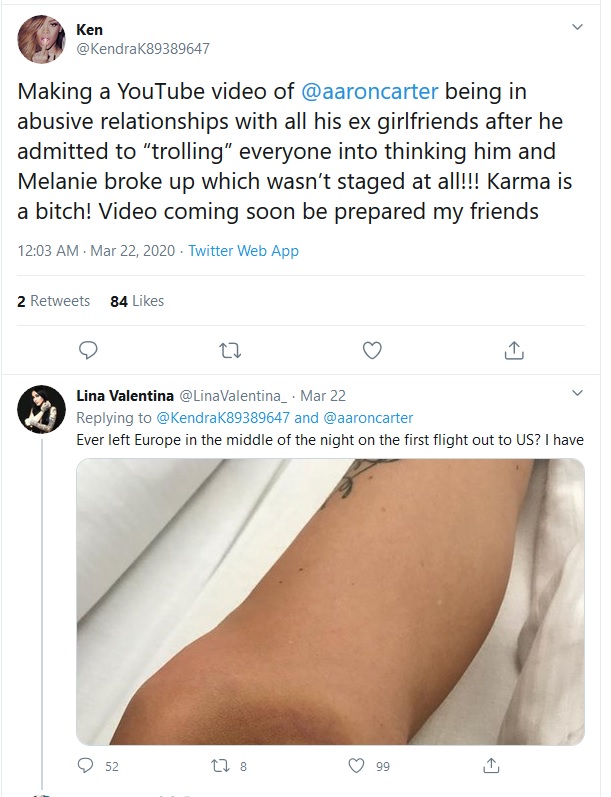 In response to Lina’s side of the story, here’s what Aaron Carter had to say:

#AaronCarter you cant sue @LinaValentina_ for posting the truth, or anyone else for that matter! And No we ain’t Jealous! I would never want your life. And no one wanted you dead…..just wanted you to get help, be accountable and cut the bullshit!! pic.twitter.com/FVa54Bw3rh

#AaronCarter you don’t get to control @LinaValentina_ anymore!! If she wants to speak HER TRUTH she can!! And I fully support her! https://t.co/6kE5vv1UCl

Abba has also confirmed in the past that she faced a similar situation:

It’s an ongoing feud and we will keep sharing the updates. These things are getting messier.

Aaron CarterDomestic AbuseJenna SheaLina ValentinaMarlie Martin
0 5,509
Share
Subscribe to our newsletter
Sign up here to get the latest news, updates and special offers delivered directly to your inbox.
You can unsubscribe at any time

Alissa Violet & FaZe Banks Back Together? YES, say the Rumors!