Marvel fans are impatiently waiting for the next big MCU movie since Endgame. It seems as if Spider-Man 2 and Black Widow won’t be enough to hold fans off. Undoubtedly, everyone is looking forward to The Eternals to actually kick off Phase IV of MCU. The movie will introduce a whole new lot of heroes (and villains). Kumail Nanjiani finally shared some deets about the movie: 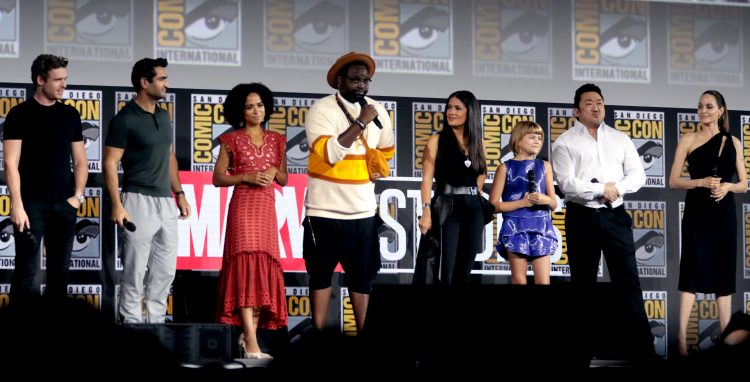 Nanjiani recently appeared on the “New Hollywood” podcast with his wife Emily V. Gordon. The couple got famous when Kumail starred in his own Oscar-nominated biographic film The Big Sick. In the interview, he was asked to share some details about the upcoming movie. The Eternals is based on a group of cosmic aliens that have been living in secret on Earth for thousands of years. However, Nanjiani revealed that:

Related: Kumail Nanjiani is thankful for his role in ‘The Eternals’

The star also revealed that the movie will feature its own Bollywood-style dance number. For those of you who don’t know, Bollywood dances are a cinematographic marvel. They can include up to a hundred dancers, each outfitted in beautiful cultural dresses. Kumail Nanjiani said he took months of dance classes to prepare for the scene. He describes his experience as:

I remember the first time I went to rehearsal, I walked in and there were all these South Asian people. It was so moving immediately. I was like, ‘Oh my God, we went from none of us to so many in one scene.’

Kumail has also boasted working out for months for the movie:

I never thought I’d be one of those people who would post a thirsty shirtless, but I’ve worked way too hard for way too long so here we are. You either die a hero, or you live long enough to see yourself become the villain. I found out a year ago I was going to be in Marvel’s Eternals and decided I wanted to transform how I looked. I would not have been able to do this if I didn’t have a full year with the best trainers and nutritionists paid for by the biggest studio in the world. I’m glad I look like this, but I also understand why I never did before. It would have been impossible without these resources and time. So big thanks to @grantrobertsfit who started working with me at the beginning of the year and made me understand true physical pain for months and months. Then, once we started shooting, a massive thanks to @davidhigginslondon and his team (@ellispartridge, @thebeardypt, @tomcheesemanfitness) for training me almost every day and making me strong, limber and injury free. I can almost touch my toes now. (And thank you for forcing me to do cheat meals David.) Matthews Street Catering for their delicious and healthy meals. And finally, the biggest thanks goes to @emilyvgordon for putting up with me complaining and talking about only working out and dieting for the last year. I promise I’ll be interesting again some day. #thirstyshirtless (Photo by @markupson.) (edit: I left off one very important person: @lancecallahan who trained me for 6 years and helped me build the foundation I could use to do this. Thank you!)

Related: Game of Thrones’ Co-Stars In Love Triangle in Marvel’s “The Eternals”

What we know about ‘The Eternals’?

Although no trailer has been released as of yet, there are some details that are known. First of all, the movie flexes a very talented diverse cast: Angelina Jolie, Richard Madden, Kit Harrington, Salma Hayek, Kumail Nanjiani, and Gemma Chan. It is the first time a studio is risking an introductory movie of a billion-dollar franchise with such a cast. Moreover, ‘The Eternals’ also features Marvel’s first openly gay character: Brian Tyree Henry, who plays Phastos. Fans cannot wait for the trailer release so that they can glimpse into what Marvel Studios has in store for them.

Related: Richard Madden’s first look in ‘The Eternals’
Kumail NanjianiMarvelMarvel Phase 4MCURichard MaddenThe Eternals
0 746
Share
Subscribe to our newsletter
Sign up here to get the latest news, updates and special offers delivered directly to your inbox.
You can unsubscribe at any time

Who is Game of Thrones and Star Wars Actor Max Von Sydow?