Aaron Carter, the estranged brother of Nick Carter from Backstreet Boys, is not backing down from anything. Though he is keeping a low profile on his Twitter and Instagram handles for now (low, compared to the way he goes bombarding tweets and Instagram stories usually). He is not keeping it low on YouTube though. Aaron Carter used to be an interesting young musician while he was performing as a child artist. However, apart from the AC Army, not many are a fan of Aaron now.

He has been in various controversies including his 2-days relationship with Jenna Shea (an Instagram influencer/escort), a weekend hookup with Trisha Paytas (y’all know who she is), smearing Nick Carter’s name as a rapist, accusing his own dead sister for child molestation/rape when he was a kid, stealing art, stealing art again, dating Melanie Martin, and accusing Jeffree Star for stealing his merch ideas. That’s not all, the pedophile and animal abuse are also a part of the never-ending list of controversies when it comes to Aaron Carter. The list is huge and it is not ending any sooner. Now, new receipts have been shared by many useful resources, proving something named E-Begging, hitting a pedestrian in 2018 as well as a hint towards domestic violence against his current girlfriend: Melanie Martin.

If you are not familiar with the e-begging, then let us do the honors. E-begging is just the begging with an e, which means cyber or internet. It is the “online version of traditional begging”. What Aaron Carter has to do with it? Well, if you do not know the answer already then you might be one of the AC stans.

Aaron Carter has asked his fans and followers, multiple times during multiple live streams, for donations. Here is a compilation of the e-begging clips:

Related: Melanie Martin Is Moving In With Aaron Carter

Where is all this money going? No one is sure.

Not to forget, a GoFundMe fraud was also shared by many fans. They confirmed he started a fund for a kid named Elijah, and Elijah never got the money. $10,000+ was raised by Aaron Carter and after people starting confirming Elijah did not get the money, the fund has been removed from the official page. Coincidence? We don’t think so. 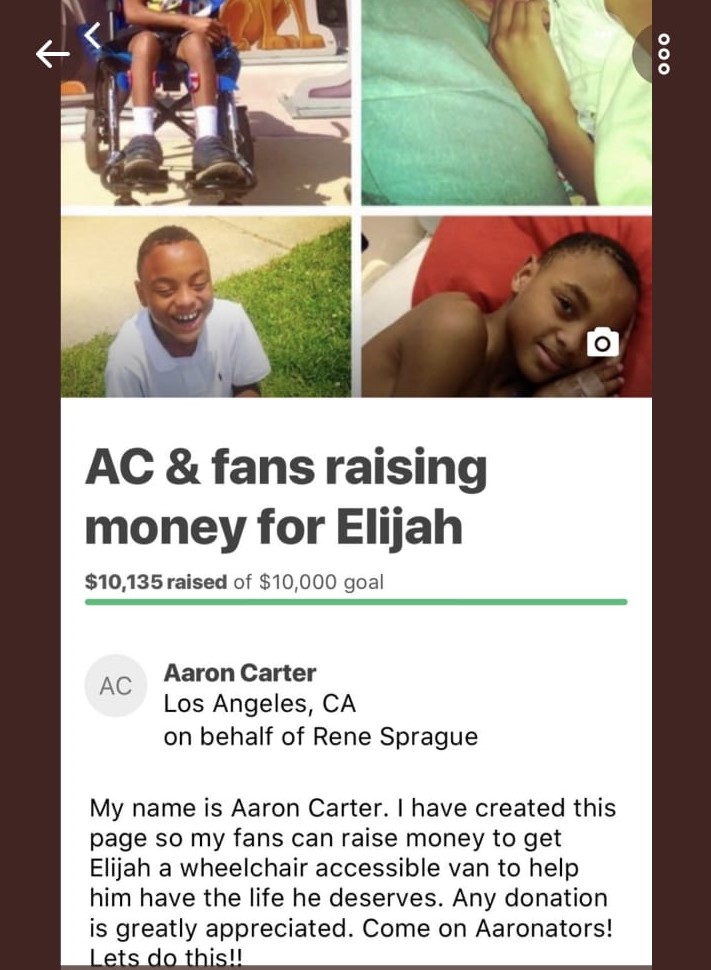 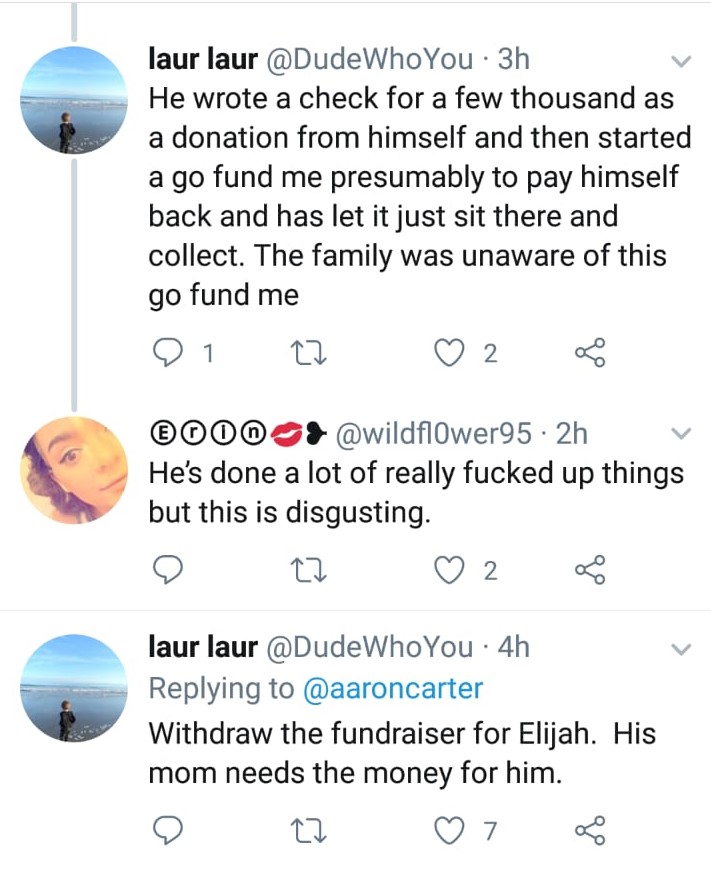 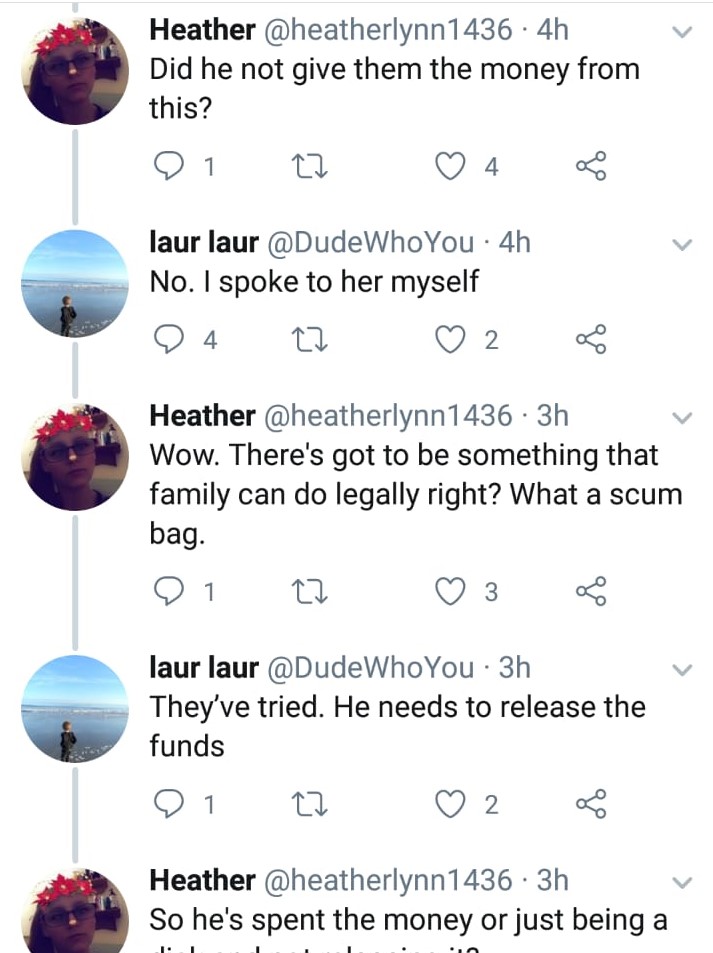 Aaron Carter does not look cute asking for money when he has Instagram posts like this one:

Well, this is getting stranger with every new allegation as per AC Army and receipt as per the anti-AC Army. In one of the latest live streams of Aaron Carter & Ganval (Ganval was showing Aaron Carter’s live on his live @ganval on YouTube). I did not see the LIVE when it was actually live, a tweet led me there:

#aaroncarter @aaroncarter fans watching his LIVE called @LANLASD police for a domestic violence check up! We all are watching @ganvaltv commentary and are not on Aaron’s live! Stop lying Aaron! Melanie was screaming ‼️‼️‼️‼️‼️‼️‼️

Turns out, 5 cops showed up during Aaron Carter’s live stream when some fans called the police because they heard Melanie Martin screaming. While the cops were over, Aaron asked his girlfriend Melanie Martin to mute the stream. It was dark so the view is pretty much useless but after the cops left, Aaron Carter resumed what he was doing. Melanie confirmed there were 5 cops, while Aaron said that Ganval is in trouble. As per Aaron:

You [Ganval] really messed up this time.

While Ganval, who was also streaming at that time but he was off-the-screen for few minutes, confirmed he was just taking a dump. Ganval even called the police department and told the cops that Aaron Carter keeps using his name for every single accusation or allegation thrown his way. Whether there was a domestic violence scene or not, Ganval is planning to sue Aaron Carter soon. As claimed by Melanie, they were talking to one of her friends and there was no yelling.

If you follow Aaron Carter just for kicks and giggles, then you might know about a twitter account “whatsthetruth21”. It is a thread full of receipts that refer to a civil case against Aaron Carter.

THREAD: We’re aware of a civil case (motor vehicle: personal injury/property damage/wrongful death) in which #AaronCarter is the defendant. AC hit the plaintiff with his car. This is developing but we will post what we do know as of now. Thx to @Missa503 for her help on this!! pic.twitter.com/9ivqrvZNq9

As confirmed by whatsthetruth21, Aaron Carter hit a person who was walking on the sidewalk. There is a witness of the scene as well.

We don’t have access to the full court documents yet, but these are in the preview. It shows that #AaronCarter has paid $150 jury fees, & that the plaintiff has motioned to amend the complaint. A hearing for the plaintiff’s motion is scheduled for February 19, 2020. pic.twitter.com/hJvirmKCuM

The story is still developing and only whatsthetruth21 seems to have access to the receipts for now, with the help of some resources. These things are really messed up.

There’s more from the developing story:

According to our sources, he was badly injured and has had multiple back surgeries. He is suing #AaronCarter for $1.5 million. https://t.co/smcftUFWv8

We’ll share more details as soon as there is progress in the case.

Aaron Carter & Lina Valentina had been dating for quite some time before they broke up. In fact, Aaron accused Lina of slapping him and he said he has never hurt Lina. They were dating since 2018 but they broke up in August 2019. Even though he initially claimed that he has no hard feelings against her and that they just couldn’t work it out. Aaron requested a restraining order against her within a few days after the breakup.

Lina Valentina recently shared the images of a book titled “Psychopath Free” by Jackson MacKenzie. This gives huge hints about her relationship with Aaron Carter. Since we did not see Aaron Carter reading a similar book, you can connect the dots and deduce who was the psychopath in Lina’s life.

We hope a psychopath free life for everyone. What’s next in Aaron Carter’s 2020 Controversies? How long will Melanie Martin stay in this relationship, that includes Qtiping Aaron’s ears? We’ll have the answers soon.

Related: Aaron Carter Is Weak? Jenna Shea Spills Tea After Breakup
Aaron CarterDomestic ViolenceE-beggingGanvalMelanie Martin
2 4,656
Share
Subscribe to our newsletter
Sign up here to get the latest news, updates and special offers delivered directly to your inbox.
You can unsubscribe at any time

What we know about See Season 2 so far