Aaron Carter Is Stealing Art Again | Accused Of Pedophilia Too

Aaron Carter, the American singer and record producer, is making the headlines again. He recently slammed his followers for calling him a drug addict, calling his girlfriend Melanie Martin a hooker, as well as the people who keep slamming his weight. While there are true haters lurking on his Instagram and Twitter handles, there are also a few honest fans and followers who are further divided into two groups. One group is only following his music, while the other group is following him blindly. Even though Aaron Carter keeps giving them multiple reasons to stop doing it, those rare fans still love him. The issue is, Aaron is not good at communicating with his fans. And that is a known fact. Proof? Well, he is stealing copyrighted art from artists again and trolling them on the internet. Aaron Carter is also accused of being a Pedophile. WTF is happening?

Aaron has his Instagram in private mode again. However, his Twitter is pretty much public. That is why all the internet users can see his tweets unless he deletes them or deactivate his Twitter handle again.

Aaron Carter, the estranged brother of Backstreet Boys’ Nick Carter, posted an image of two lions, very beautiful lions, and posted this caption with it:

two lions at war can reach an understanding. I have my lions den, you have yours. https://aaroncarter.com Hoodies are BACK UP!!! all un received orders contact Dawn in my contacts on my website. you can reach me directly too. xo

two lions at war can reach an understanding.
I have my lions den, you have yours. https://t.co/UYrZmZDJfl Hoodies are BACK UP!!! all un received orders contact Dawn in my contacts on my website. you can reach me directly too. xo pic.twitter.com/dJB7LcRWcC

And fans pointed out that they neither get refunds nor their orders. Aaron Carter sells one customized hoodie for $100. 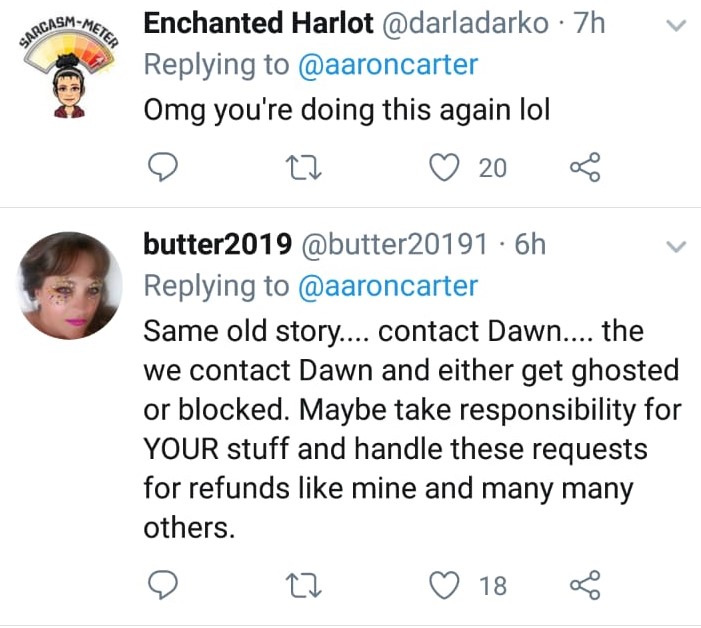 However, his followers also immediately pointed out that the image is a stolen art piece that has been modified by Aaron Carter, again. Last time, he stole art from Shimhaq and claimed that he purchased the image before modifying it. However, Shimhaq confirmed he never sold his art to anyone. Ultimately, Aaron said he took that image down but he kept using the image. Now, seems like history is repeating itself.

Related: Melanie Martin Is Moving In With Aaron Carter

Jonas Jödicke, famous as JoJoes Arts, is a digital artist and he sells his work on Etsy. He is a 25-year-old artist from Berlin, with 259k followers on his Instagram handle and 2179 followers on Twitter. His original piece of these lions is available for purchase on Etsy. 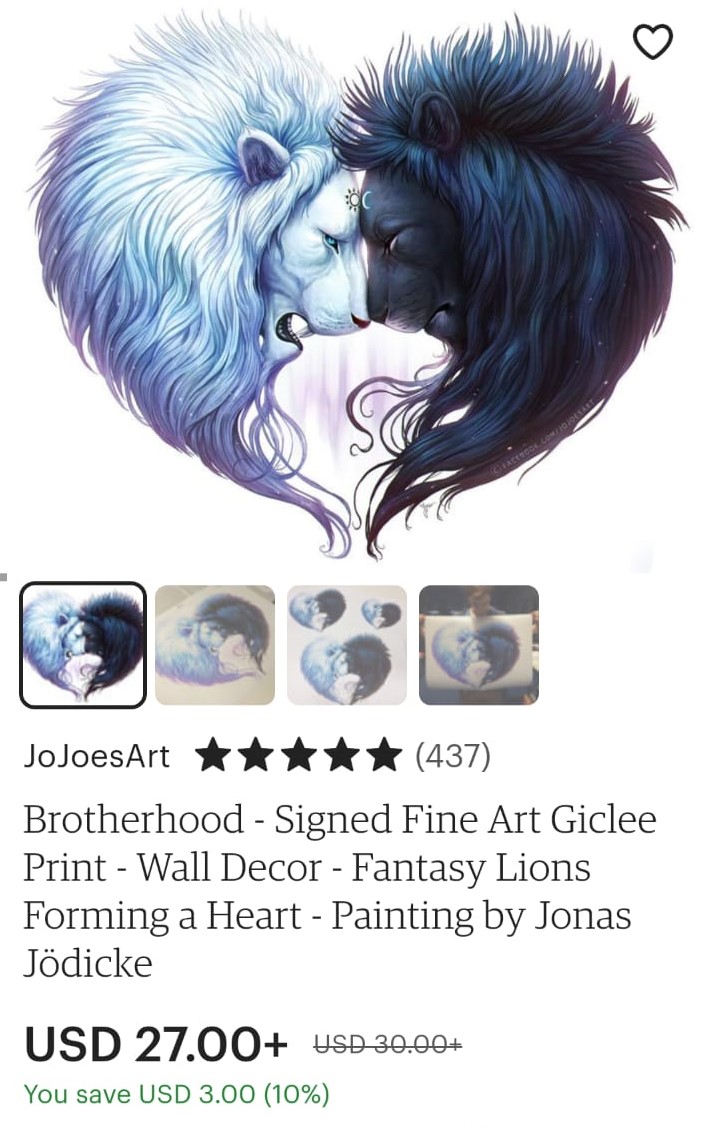 Fans Reacting To The Stolen Art

As soon as Aaron Carter posted that tweet, the JoJoes Art fans were quick to connect the dots and they were not hesitant to highlight it as well.

Some even used the chance to troll Aaron Carter. 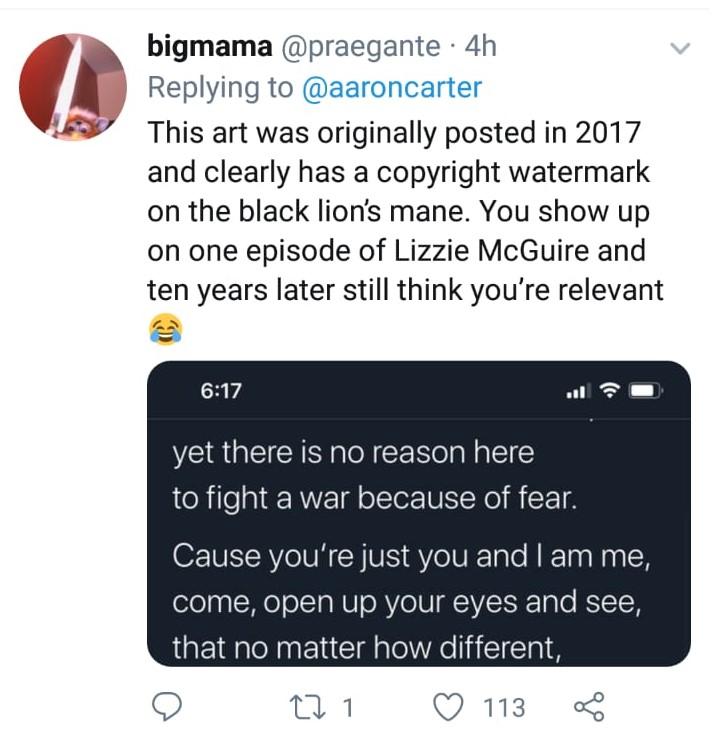 JoJoes Art (Jonas Jödicke) tweeted Aaron Carter after he was contacted by many fans regarding his art being stolen by a Public Figure without Jonas’s permission. 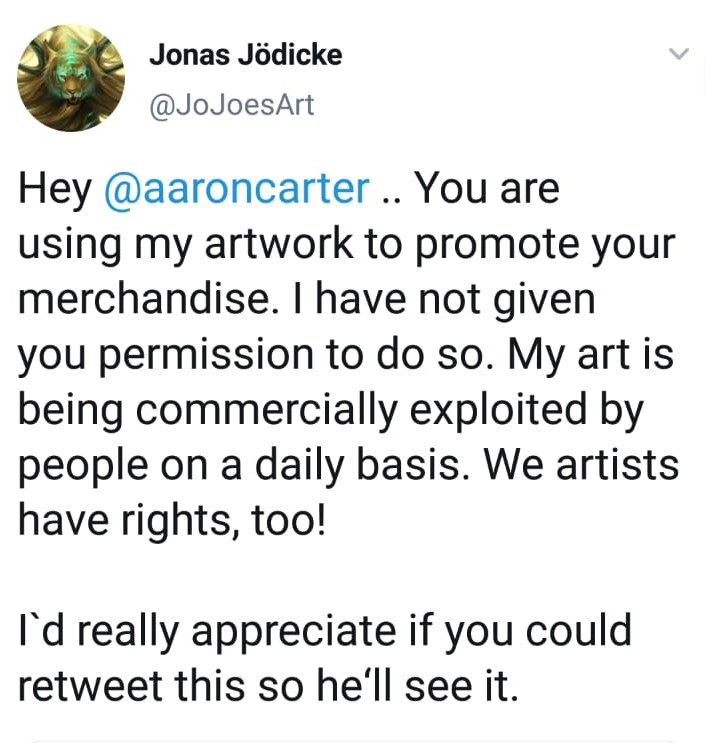 Jonas Jödicke’s art has not been stolen by any artist for the first time. He has faced similar issues before and nothing can be ruder than that. But, Aaron Carter proved he can be ruder than our imagination and he responded to JoJoes Art as under: 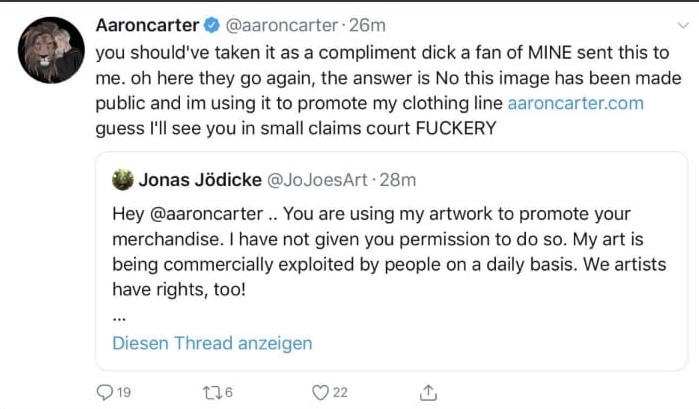 Y’all can see how JoJoes Art politely highlighted the issue but Aaron was quick to clap back using profanity as a weapon.

JoJoes Art was very disappointed to see this response by Aaron. He responded to Aaron Carter: 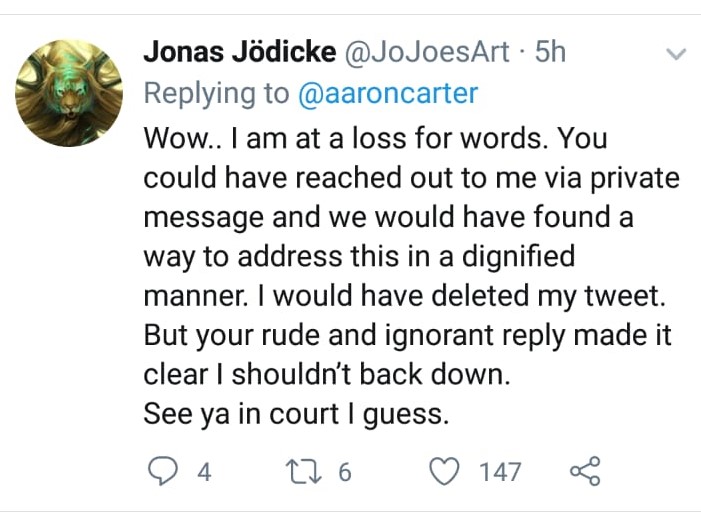 Jonas also shared a tweet thread on his profile. 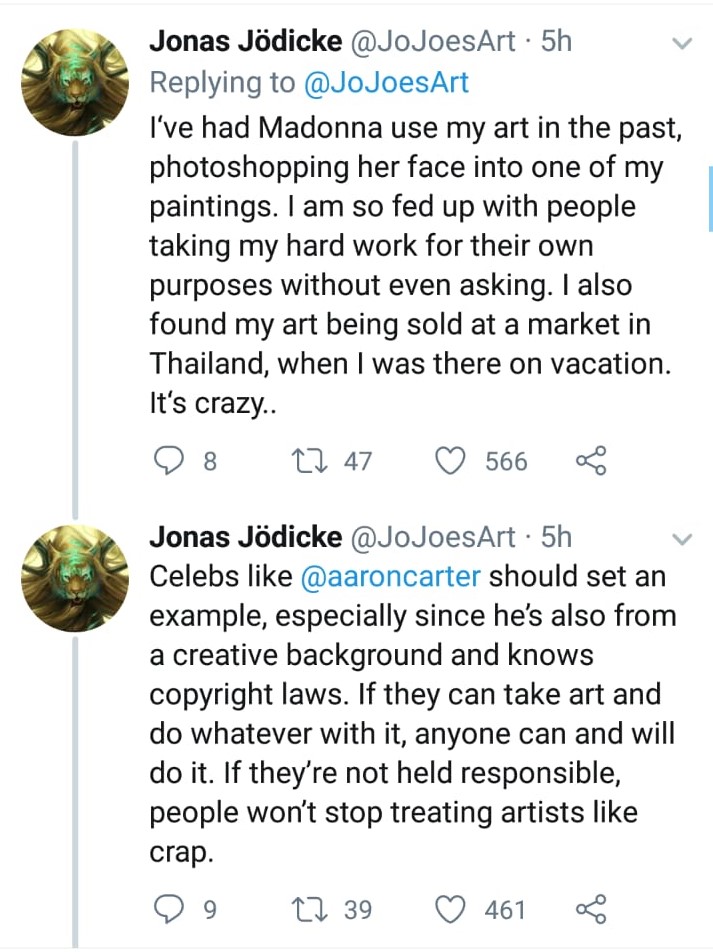 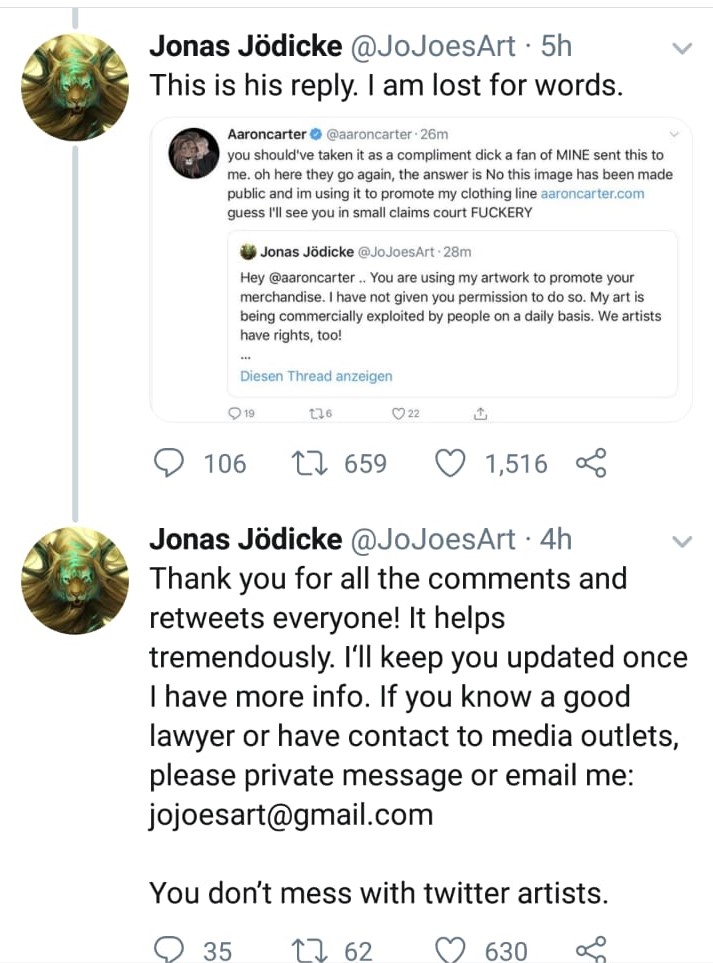 JoJoes Art also shared the Aaron Carter Drama on his Instagram stories as he has more followers there. 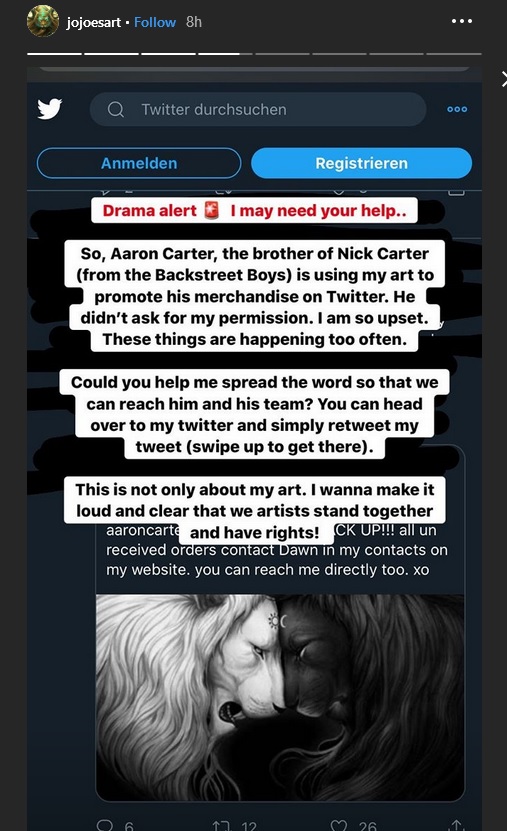 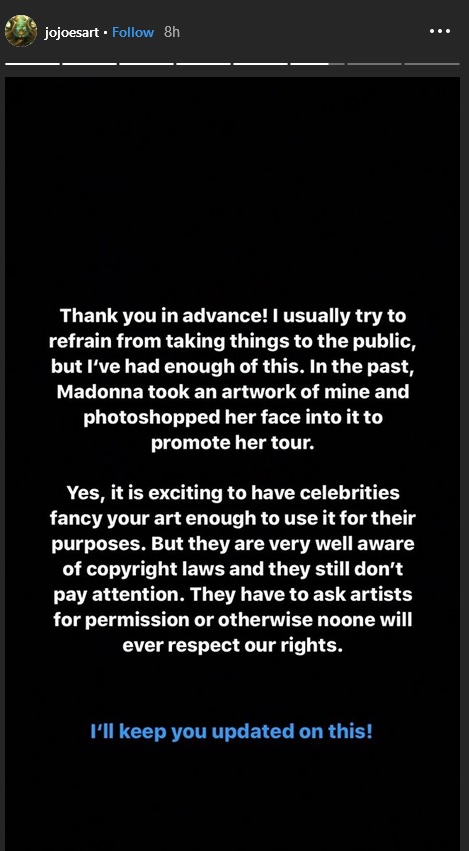 The internet is noticing and we wish Jonas Jödicke all the best. Artists do not just need credits and acknowledgments. They have rights, and their work should always be respected. 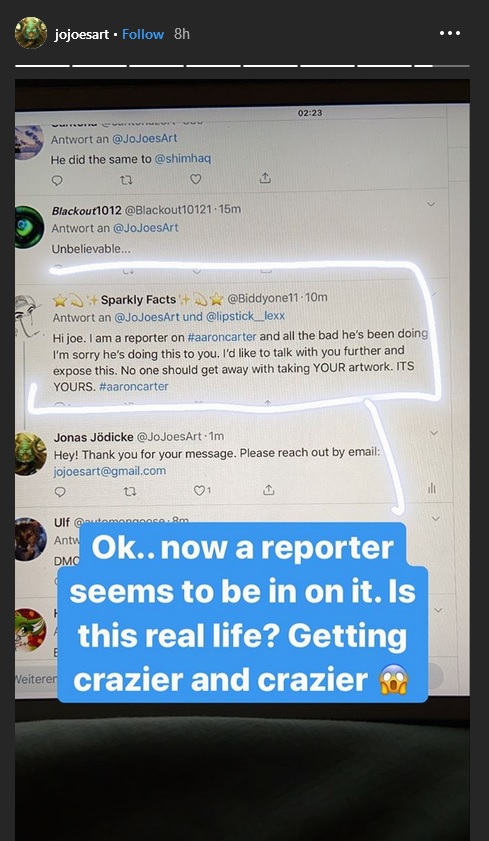 Right after addressing, or rather, misbehaving with JoJoes Art, Aaron tweeted about all his latest accusations:

You admitted sending pictures to a minor and you deny that. Something tells me you are VERY afraid.

In response to Mel, Aaron blocked Mel after saying:

if I was afraid I wouldn't be addressing it in public on my platforms SWEETIE for the whole world to see no media has picked up on it cause its a fallacy and I will sue for slander. now fuck off and enjoy being blocked https://t.co/pqr9dX6SeE 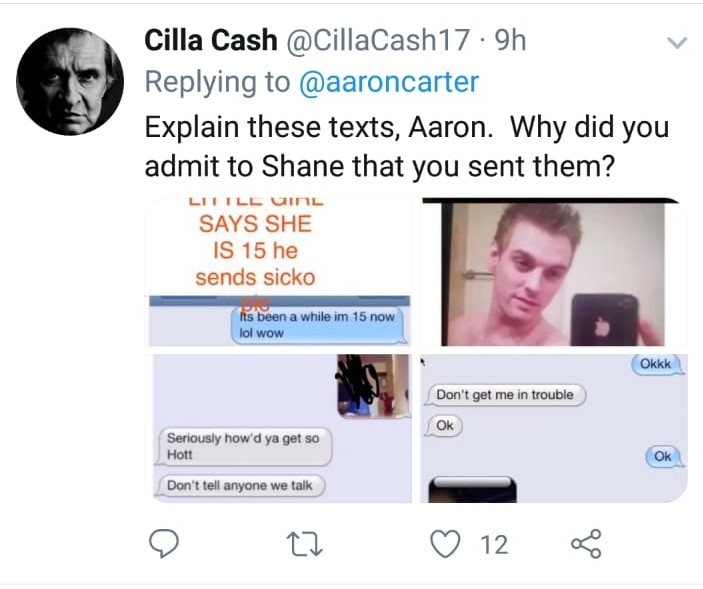 Someone pointed out that this does not prove anything and these images can be fake as well. Another Twitter user shared Aaron’s confession video clip, as a receipt:

Aaron admits to sending messages to the 15-year-old girl. However, the credibility of those images is still questioned.

We hope Aaron sticks to music production and hires someone to deal with his social media accounts as he is not being fair to his fans, honestly. Take this response, for example: 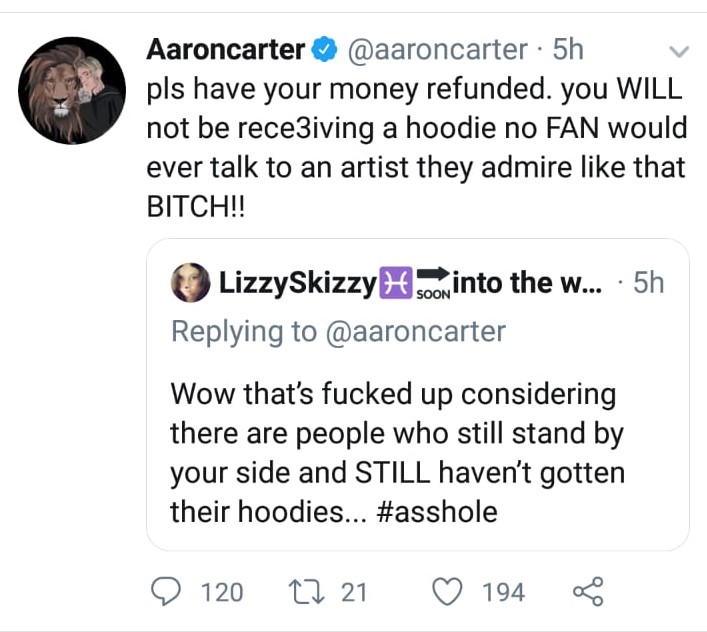 Related: Aaron Carter | E-Begging, Domestic Violence & Hitting A Pedestrian
Aaron CarterArt TheftJoJoes ArtPedophilia
1 9,367
Share
Subscribe to our newsletter
Sign up here to get the latest news, updates and special offers delivered directly to your inbox.
You can unsubscribe at any time