Pedophilia is no joke and only sick people can find such jokes entertaining. It does not matter whether the joke was made according to the dark sense of humor in 2011 or was it made back in the stone age days. The major issue remains the same: Pedophilia is the worst crime one could ever commit. Making fun of this gruesome act in a way that accuses children of being the victims, well that just takes the sickness to a whole new level. Probably, that is why Gabbie Hanna, the YouTuber and Vlogger famous for her The Gabbie Show, just asked for forgiveness. An old tweet by her about a pedophilia joke just resurfaced on the internet and even Gabbie is finding it gross. However, the internet is not having it and her apology just backfired.

It’s making everyone uncomfortable to read that tweet from 9 years back. However, people have found it and Gabbie Hanna had no option other than to apologize publically. 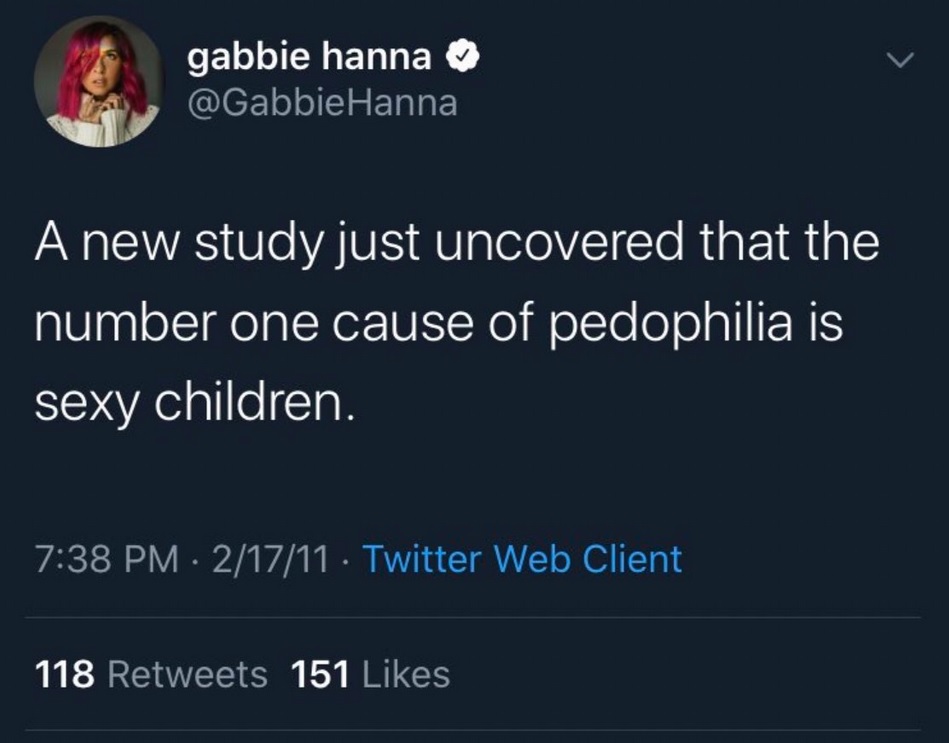 The joke was definitely created by someone, not in their right mind. The 20-year-old Gabbie Hanna, at that time, “stole” the joke and shared it as her tweet. However, now that it’s all over Twitter and people are canceling her, Gabbie confessed for stealing it, asked for forgiveness and issued an apology statement. 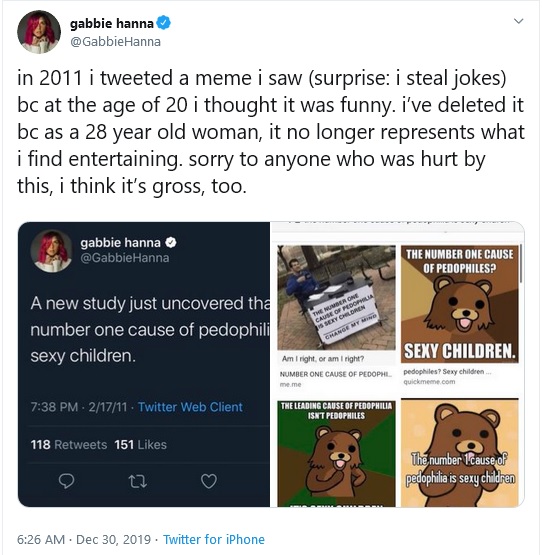 Whenever a celebrity says something controversial. Or asks for forgiveness over something controversial, the internet gets divided into two teams. One in favor and one against it. Similarly, the Gabbie show host Gabbie Hanna is facing backlash over her apology. One group says she should be forgiven. As she is owning her fault instead of ignoring it. The other group says whether she owns it or not, it does not matter. What matters is she joked about pedophilia; blaming the children. And no one should be doing that at all.

This situation is similar to the recent Camila Cabello situation when her followers canceled her for her old racist Tumblr posts.

To everyone congratulating her for owning up… she didn't. The tweet was found and published and Gabbie tried to delete it. Too late.

Some have valid reasons to unfollow Gabbie.

People are also relating her Pedophilia joke to Jessi Smile’s rape and Gabbie’s response to it.

But she hasn't "evolved and matured". She has the same behavior but different ways of displaying that behavior. Let's not forget what she has said to Jessi. Pedophilia is not something to joke about.

Jessi Smiles is Gabbie Hanna’s ex-best friend who was raped by her ex-boyfriend Curtis Lepore.

Some more tweets have resurfaced as well.

on this episode of

Is Gabbie Hanna really evolved and matured now? What are your thoughts? Please share your views in the comment section below.

Related: Gabbie Hanna Book Picked up by Urban Outfitters
Gabbie HannaPedophilia
0 3,820
Share
Subscribe to our newsletter
Sign up here to get the latest news, updates and special offers delivered directly to your inbox.
You can unsubscribe at any time

The Mandalorian Season 2 Is Coming Back in 2020, Confirms Jon Favreau

Is PewDiePie’s YouTube Rewind 2019 better Than the Original one?