Keemstar from ‘Drama Alert’ has stirred some real drama by ‘launching’ KeemKosmetics. The YouTuber has not only shaded some big names from the beauty community while he did it but he’s still on a roll. According to Keemstar himself, his color palette is already sold out. But is there an actual palette in the first place? Or is this another troll. Keep reading it: ‘we’ might have decoded the drama this time.

KeemKosmetics ‘Launch’ Throws Shade At Many

The ‘Drama Alert’ YouTuber posted a launch video on his channel where Keemstar tries to visualize the process of creating the eyeshadow palette, quite comically. The video starts with two statements written on a plain black background:

He is then seen writing a tweet that says:

To which, really, brutally rude responses are shown from people who shade Keemstar and his videos. Most of those tweets are followed by a “clown” emoji.

This gives him the idea of a clown-themed makeup palette and he is seen calling up someone giving his big idea while making over-acted gestures.

Daniel Keem (Keemstar) then shares his idea in a meeting, holding several color palettes. Opening up a cupboard labeled ‘Top Secret’, he reveals a diagram of a palette plus a clown and an equal sign to ‘dollars.’ His idea is rejected, and he is seen disappointed when he suddenly takes out a ‘KeemKosmetics’ labeled black palette and starts applying a white shade, followed by what looks like flour, all over his face. And then he transforms into a clown.

So far, it is super clear that Keemstar is making fun of other YouTubers who come up with their palettes, which is quite a trend as almost every famous beauty YouTuber has their own cosmetics now.

Keemstar can be hilarious sometimes

Then comes the kinda-cringe part where Keemstar is seen dancing with two girls in the same clown makeup with K logo and opening up the palette.

Then a voiceover: “KeemKosmetics: unlock your inner clown!” So this is a clear parody of James Charles’s voice and his eyeshadow palette tag-line “Unleash your inner artist.”

Keemstar ends the video again referencing the community that he knows he meant to offend.

“Guys, the Beauty Community is gonna come at my neck, please protect me at all costs, I’m scared.

Guys I’m going into protective custody, I’m going in to hiding.. These mean girls are coming after me I’m scared.”

Below the launch video, Keemstar relentlessly mentioned all the people he was trolling by thanking them. He thanked Shane Dawson & Jeffree Star for making their latest docuseries The Beautiful World of Jeffree Star. Basically, Keem was thanking the duo for seeding the idea in his brain. He also confirmed Trisha Paytas agreed to join him for the shoot, but then ghosted him. Rest of the YouTube Video description reads as follows:

Also PS: Originally i wanted to use the song Tati Westbrook used in her launch (GREAT SONG) but the artist couldn’t cus Tati got exclusive rights allegedly & this was all a joke thought she would give me permission but she just IGNORED ME! I would have been fine with a “NO” but ignoring me all together? You never going to catch me with some halo beauty unless you see on halo 3!

Lets take a look at the palette itself.

Notice the shade-naming? He again trolled different YouTube personalities. ‘Jake’s Secret’ is for Jake Paul, or is it some other Jake?. ‘Kitchen Floor’ is a clear hint at Trisha Paytas, and ‘Cat Thrower’ is for Alinity Twitch. FaZe Banks also gets dedicated shade ‘Fazed’. Drama Alert, the black shade, is obviously Keem shading himself. 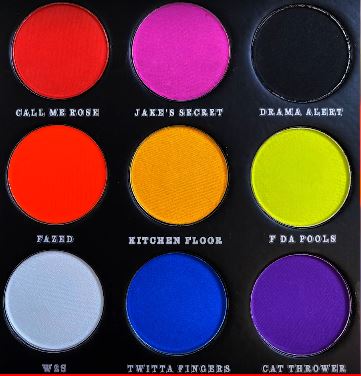 W2S is for Harry, who is apparently not responding to Keemstar.

No response from Harry yet! pic.twitter.com/xKxVPP6tYh

So, apart from all the shading other YouTubers, and the interesting ‘shade’ naming (literally!)…. the only catch here was that Keemstar shared an official link to buy the palettes from.

And some people claim that their order even went through.

We tried getting to it and the website now says “Access Denied” and we think this all may still be a publicity stunt or just a troll.

According to Keemstar, the site crashed because of heavy traffic, went back online and probably crashed again.

He explicitly states that this is a troll, but we’re beginning to think that ‘maybe’ there was an actual palette being sold.

He is even preparing for another launch.

Everyone is asking me when the next #KEEMKOSMETICS launch is….

Do you guys actually want another drop in 2019?

We think Keemstar did launch KeemKosmetics. We just need to see the palettes people receive to completely believe that he really just did that.