Okay, what’s happening? I mean, why cannot we find a road map leading to this situation? Alissa Violet, Jake Paul’s ex-girlfriend, and FaZe Banks (TM’s ex-hookup?) were dating before they broke up in July this year. Many fans shipped the couple and they were not really happy with the sudden announcement. They even thought it has something to do with FaZe’s confession of hooking up with Cancelled podcast host a few years back. However, they were particularly “not happy” with Alissa “thriving” after the breakup, without any mentions on FaZe Banks in her posts. But seems like Alissa is done staying silent. Something has triggered her and she is exposing FaZe Banks now, after months of breakup.

(P.S: Can someone please confirm whether they were dating again after the break-up announcement?)

A Recap Of The Break-up

Ironically, right before this tweet, Alissa posted this on February 11, 2019:

Which really worried all the Alissa-Banks shippers. 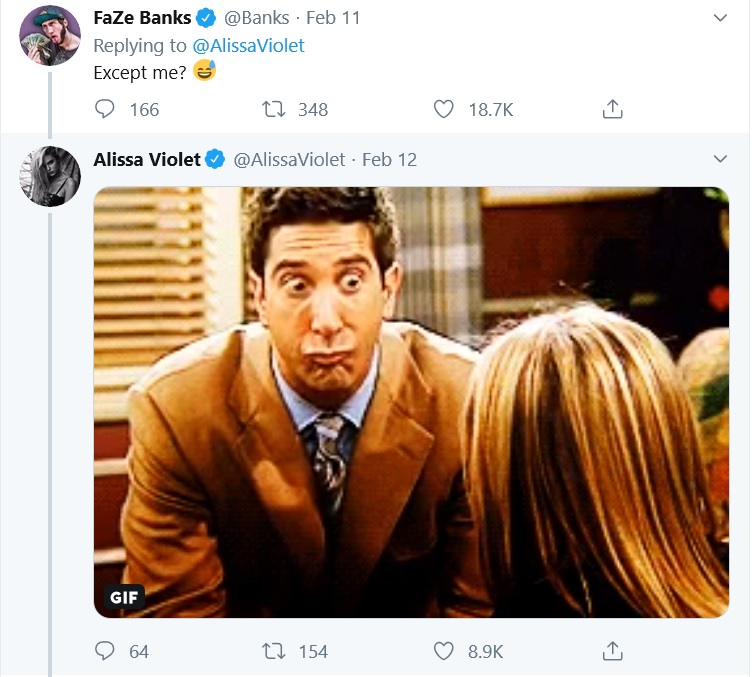 At that moment, fans really couldn’t decipher this GIF posted by Alissa. However, things are starting to make some sense now. Apparently, there was already trouble in paradise.

But then, everything was back to normal and Banks even gifted a new car to Alissa.

I can’t believe you’re real. Idk why I’m crying in the club rn

I love you baby

So, Banks appeared on NoJumper podcast when the host Adam asked Banks if he ever hooked up with TM. Banks was still in a relationship with Alissa at that point and TM & Jake Paul were engaged at that time and getting married. FaZe confirmed that he and Cancelled podcast host did hook up but it was a long time ago. Somehow, Keemstar’s global surveillance caught sight of Alissa unfollowing Banks on social handles, and he made a Drama Alert video which led to the birth of these tweets. 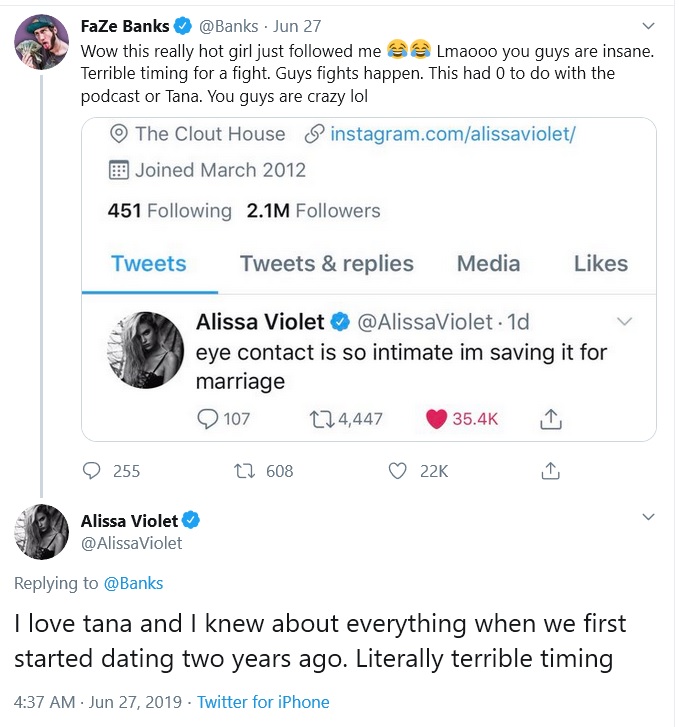 Well, this chain of tweets from Alissa Violet during the same timeline confirmed they were about to break up, and they actually did. 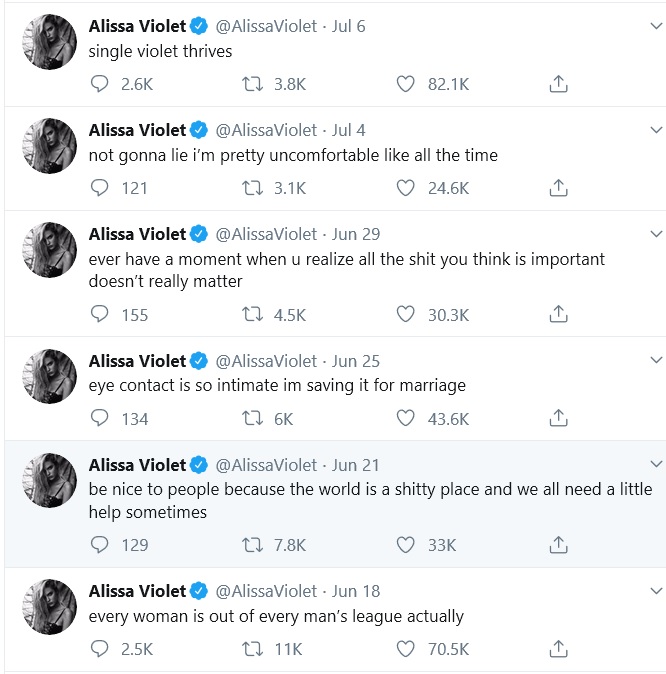 While Alissa just confirmed she is thriving in her single life, FaZe Banks addressed the breakup more openly:

Following this tweet, fans started to call out Alissa for not addressing the break up as Banks did.

everyone handles breakups differently. You guys don’t know what happened behind closed doors and I’m doing the best I can to handle everything. I’m still very hurt and upset how this happened. I will always love and care for Ricky- Alissa Violet

everyone handles breakups differently. You guys don’t know what happened behind closed doors and I’m doing the best I can to handle everything. I’m still very hurt and upset how this happened. I will always love and care for Ricky.

Do everything in your power to show them you actually care, but at the same time reminding them you don’t give a fuck. That’s the fkn game.

Fast forward to today, we are not sure what triggered it, but Alissa Violet is spilling all the details in rage. A mental health advocate “@breeleah_” posted this on her Twitter handle to allow people to interact and share their stories/views:

How did you find out you were being cheated on?

Alissa Violet retweeted this tonight with this response:

guest wing of the house**

And then fans got the answers they were waiting for, for many months. FaZe Banks tried to contact Alissa Violet, but she took it to Twitter to answer him. She even has his contact saved as “Scumbag”. 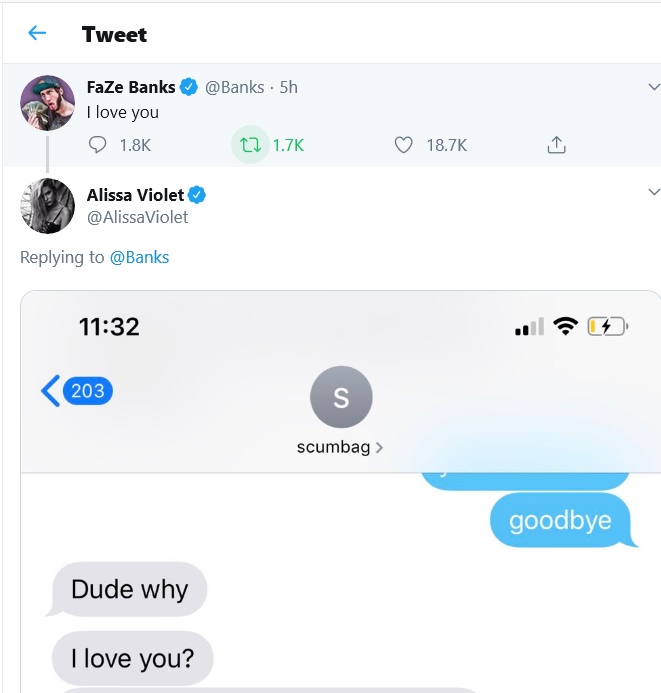 The thread of Tweets is still available on the internet. We do not know how things will turn out now as both the parties are not posting anything at the moment. 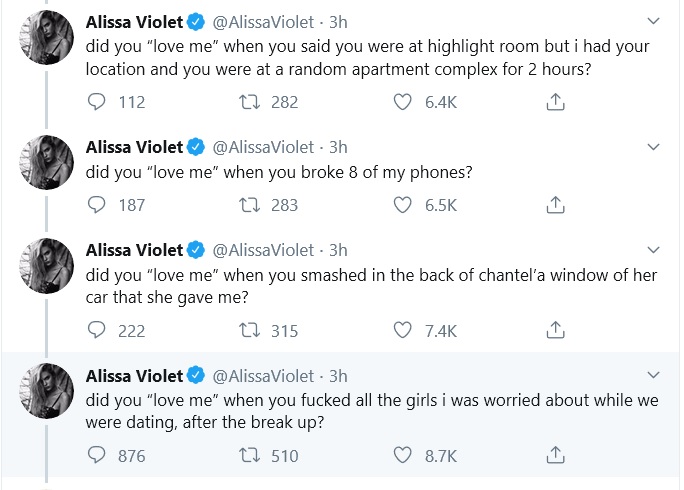 The fans really wish the best for both of them and they hope everything settles down soon. However, fans believe that Tfue, on the other hand, is keeping an eye on the whole thing, as per his subliminal tweet. This tweet was liked by Alissa Violet.

Tfue is someone who was in a feud with FaZe Banks.