So we all remember those cool tie-dye hoodies that Jeffree Star launched for Black Friday sale. Available in mauve, orange, and nude shade, the hoodies were ‘a look!’ However, American singer and rapper, Aaron Carter had a “temporary” problem with the merchandise. He says that Star stole ‘his’ merch idea and he wasn’t afraid of confrontation. It seems like, Carter is ready to one-handedly juggle multiple kinds of beef with different people. Well, makeup artist, Jeffree Star was next.

So, the singer took to Twitter sharing a screenshot of Star’s Instagram story where he revealed his merchandise for Black Friday. Aaron Carter posted a picture of the tie-dye hoodies and straight-up confronted Jeffree Star by mentioning him on Twitter:

“Hey @JeffreeStar your merch looks a lot like my custom pieces I do by hand? tsk tsk.”

Well, the rest of his words aside, that condescending ‘tsk tsk’ at the end clearly says “bring it on Jeffree.”

Before we dive into the tea, we had to check out if Aaron Carter’s statement had any truth to it. So we looked for the tie-dye merch he was talking about.

Okay, we see what Aaron is angry about. The design is really similar and so are the base colors. But on the other hand, tie-dye is just… tie-dye. It’s the same concept to begin with, so we’re unsure about the ‘stealing designs’ part.

So far, Jeffree Star is silent on the matter. We know one thing; he is not one to mess with. And his fans think so too.

Other Jeffree stans said that he had been selling this design for years. So Aaron “needs a chill pill”….

Looks like Aaron Carter was not appreciated for the call-out. We’re still waiting for Jeffree Star to shed some light on this merch matter. Or maybe some ‘facts’ as usual. We’ll be keeping an eye out for this one.

Meanwhile, the warnings from Jeffree Star fans led to Aaron Carter backing off from the allegations. 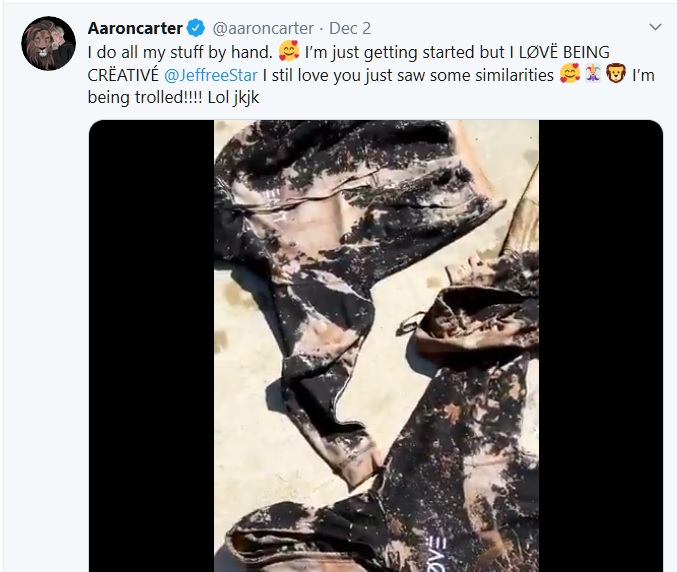 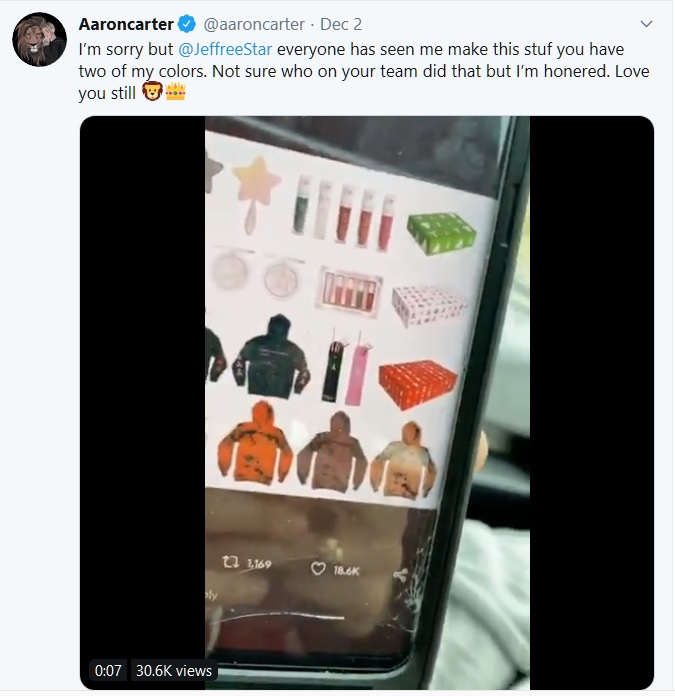 Related: Jeffree Star Confirms Nathan Schwandt and Him Broke up
Aaron CarterJeffree Star
0 7,464
Share
Subscribe to our newsletter
Sign up here to get the latest news, updates and special offers delivered directly to your inbox.
You can unsubscribe at any time

CW’s Nancy Drew: Is it Different from the Book?