Netflix’s show The Umbrella Academy season 1 came out earlier this year. And it already divided the fans into two teams, one who really loved it while the others who didn’t like it. Well, hate it or not, it couldn’t stop the show from becoming one of the most binged shows on Netflix. Even though the show is based on Gerard Way’s comics by the same name, the conversion of comics into a TV show has been pretty interesting.

All the adapted siblings with superpowers have their own interesting stories. However, none of it beats the brilliant story of Number 5, played by Aidan Gallagher. The role, the original character in the comic book, was really meant to be played by him. That’s why when I saw The Umbrella Academy Parody by The Hillywood Show moments ago, I was really surprised to see his doppelganger.

Related: Are Hazel And Cha-Cha Returning To Season-2 Of The Umbrella Academy?

The Hillywood show is a YouTube channel, run by Hilly Hindi and Hannah Hindi. Both sisters are brilliant in creating parodies of movies, TV shows, and songs. In fact, their brilliance is acknowledged by many celebrities as well. The biggest proof is, Hilly Hindi and Hannah Hindi had three original Supernatural celebrities as cast members for The Umbrella Academy Parody. (And we’ll dig into it in the cast discussion).

The parody is 20 minutes 47 seconds long, while the original TV show had 10 episodes in season 1. Therefore, covering all the Hargreeves siblings in a 20-minute parody is pretty amazing. Their costumes, their characters, their facial features, and the acting skills, everything is on point. Somewhere in the midway, you’ll forget you are watching a parody. And it has everything to do with the graphics, visual effects and the set designs. It is not just a random parody, it is a pre-planned, properly-executed and well-developed parody.

Just like the sisters usually do, Hilly Hindi plays the protagonist role (of Number 5). Whereas; Hannah Hindi plays Vanya/Number 7 (original role played by Ellen Page). The parody also features three Supernatural alums Matt Cohen (Klaus/Number 4), Tahmoh Penikett (Luther/Number 1), and Osric Chau (Ben/Number 6).  If you do not know them by their real names, they appeared in Supernatural as John Winchester (Young), Ezekiel/Gadreel, and Kevin Tran, respectively.

Adolfo Barreto plays Diego/Number 2, Della Hamby is Allison/Number 3. Hilly and Hannah Hindi announced the project on April 11, 2019, and started a donation for The Umbrella Academy parody. The Hillywood Show used Patreon and StreamLabs to collect the funds, and we have to admit, results were totally worth it. Technically, all the donors also played a huge role in making this parody a success. And they must be proud to see the results.

The Characters Missing In The Parody

Well, the parody is focused on the Hargreeves siblings as well as Number 5’s girlfriend/wife/addiction/partner-in-crime/roommate Dolores. Therefore, you will not see Hazel & Cha-Cha, Pogo, Agnes, The Handler, and Grace Hargreeves/Robotic Mom.

Reactions By The Creators & The Fans

Even The Umbrella Academy official Twitter handle shared this parody, this alone says a lot about the concept and creativity of Hindi sisters and The Hillywood Show.

The Hillywood Show fans are loving it. In fact, we bet the number of fans must have increased after watching this parody.

I am BLOWN AWAY by this parody. Well done @HillywoodShow !!! https://t.co/nz6R8uf8cd

Gonna tell my kids this is The Umbrella Academy https://t.co/TwE5z1w0Wl

And the reaction of this fan is literally me –>

I WAS JUST ABSOLUTELY BLOWN AWAY BY HOW ACCURATE THE SETS WERE I SWORE THEY WERE THE SAME!!!! I HAD TO PAUSE FOR EACH NEW SET TO CHECK SIDE BY SIDE COMPARISONS AND IT WAS SO ACCURATE!!!! YALL DID THIS SO WELL I AM STILL SHOOKETH

However, some people did not like it. (still trying to find the reasons). Take this Reddit thread for example: 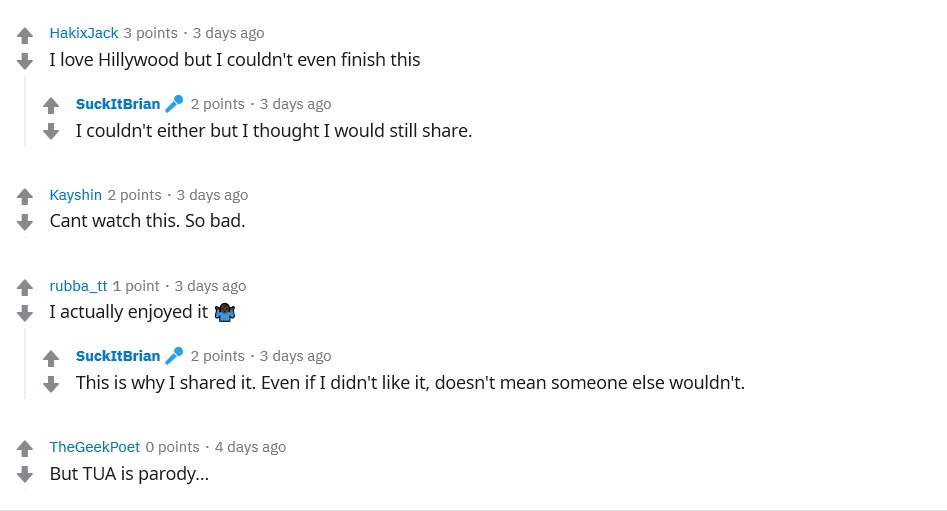 Honestly, I really loved it. It was already in my queue for reviews when The Hillywood Show recommended it. Well, while you are waiting for the official season 2 to drop, you can watch the parody and have fun. Meanwhile, I am gonna watch the Behind-the-Scenes and Number 5’s Video Diary by The Hillywood Show.