16-year-old global warming activist, Greta Thunberg has sparked some confusing conspiracy theories. According to some theorists, she not only talks about environmental issues and pledges to ‘save our environment but… she also has a time machine.

A 121 year old photograph is the reason for this hysteria. Believers of time-travel are exercising their buzzing brain-cells to make sense of it.

And others, well, they think this entire discussion reflects the death of brain cells.

But whatever you believe, the resemblance is EERIE. 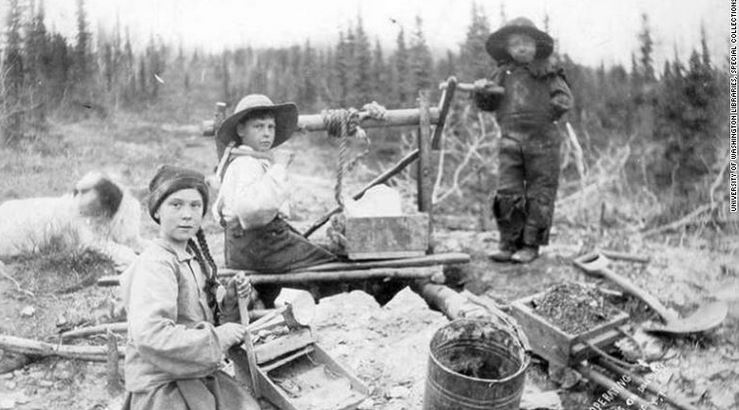 The extremely old photograph taken in 1898 and the picture was found from the University of Washington Libraries digital archives.

Three children are seen working at a mine during the Klondike Gold Rush in Yukon Territory, Canada.

The girl in the front, directly looking into the camera, with the exact same features, and ironically, the same stern expressions as Greta Thunberg is apparently Greta but in 1898.

Still not spooked out by how similar the two are? 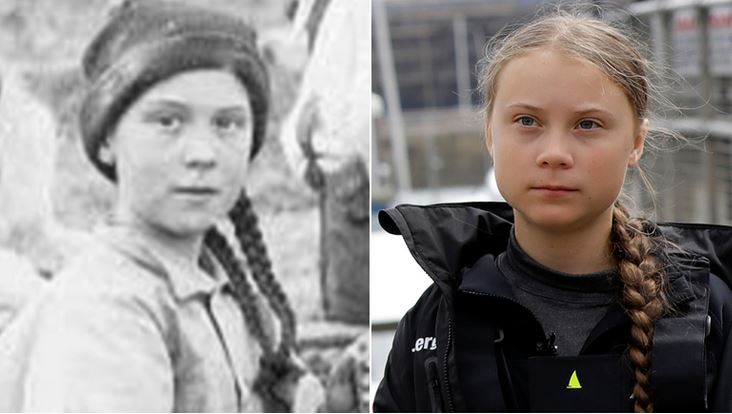 We really zoomed in to make a clear comparison. And it’s just crazy how even the minutest details of their faces are ditto copies. Notice the eye-brow shape and space between the brows. The pursed, thin lips. And the braid…

People who watch the show ‘Dark’ and know ‘the bootstrap paradox’ know what we are thinking about.

Twitter was abuzz with the old photograph spreading like wildfire along with theories people are coming up with.

According to Jack-J.S.Strange, “Greta’s a time traveler, from the future, and she’s here to save us”

He further elaborated his theory:

Another Twitter said that the global warming activist has lost hope in the current world. And hence, she has traveled back in time to fix it from where it started.

Greta Thunberg loses hope in changing current world’s mind about Climate Change, decides to travel back in time to when it all started pic.twitter.com/I7ikBtNzJ4

Someone even quoted Greta Thunberg from her speech when she spoke about environmental issues,

“You stole my childhood. The world is waking up, and change is coming whether you like it or not.”

We can literally hear her words with an all-new ‘time travel’ ring to them.

Some are now really starting to believe in time-travel.

What if time travel is real? #GretaThunberg pic.twitter.com/jMQxMNdNez

Meanwhile, others just think this just is stupid.

I mean, it’s a scientific fact that every person in the world has 7 doppelgangers (almost identical look-alikes)

A Twitter user ‘Mudhooks’ highlighted how people aren’t willing to believe or prioritize climate change but are focusing on ‘time-travel’.

And some are taking it too far….. time travelers? We’re now talking about immortals! Greta Thunberg is not a time-traveler or a global-warming activist. She’s an immortal, duh.

This stuff on Greta Thunberg being a time traveller is ridiculous, there’s no such thing as time travel.

Right now the Internet is all the rage with conspiracy theories, time-travel and Greta Thunberg. We think she will have to address this issue soon; Dankanator will be on the lookout.