Gabbie Hanna is going through a really tough life these days. Or, let us rephrase it as Gabbie Hanna is enjoying her latest song release-Broken Girls, however; the internet is trying to actually break this girl. The issue is, Gabbie has deleted all her controversial previous Tweets, which has triggered the internet army into finding all those deleted Tweets. The more they dig, the dirtier receipts get. Many fans, who have been following her since Vine days, know her ex-friend, Alx James. Both of them are not friends anymore, and fans believe this video by Alx was about him not being friends with Gabbie anymore. (He didn’t use her name in the video). However, Gabbie’s recent feud with Trisha, leading to a feud with Jessi Smiles, has another member in the rival team now. Alx James has come forward and directly addressed Gabbie this time.

Many Vine-lovers remember Alx James and they are still his fans on Instagram and YouTube. He is one of those top Viners who offered a “survival kit” to Twitter’s Vine. However, Vine did not accept the “package/ideas” offered and resultantly, Vine lost its viewership and died. Back in those days, Gabbie Hanna and Alx James were very good friends. In an old video about Vine dying, Gabbie confirmed she has always had issues when it comes to making friends. And that is where Vine helped her. She was alone when she started making videos on Vine, and the platform gave her many friends. Alx James was one of them.

Alx James confirms he has always taken her side because she was her friend, even when she was on the wrong side. However, he was done with her “inner monster” that makes Gabbie do weird things. Therefore, he stopped being her friend and blocked her on social media handles.

Alx James usually uses his Alx James Vlogs YouTube channel, however; he still has his old YouTube account active but does not use it much. That is why it was a shock for his fans to return to his old channel after 4 months and post a video titled: Gabbie Hanna…Girl Bye!

Before getting into the details, Alx James asks his fans not to comment anything like Gabbie Hanna canceled, or Gabbie Hanna Party Over.

we do allow people to grow.

Alx says he gets the frustration and he wants Gabbie to acknowledge her mistakes. Gabbie claims that her friends, who are not in her life anymore, are the bad persons. Gabbie Hanna was on a podcast with Megan Batoon a year ago. They were discussing how Gabbie moved to LA on a whim. She discusses how a friend of hers (Alx, but she doesn’t say his name) called her and asked to “move to L.A.”. But her car was broken and moving is not easy. He called her back in 30 minutes and told her that his flight is booked so she should better pack her car as they were really moving to L.A. Megan Batoon calls him a very good friend and a move a very good story. But Gabbie said:

he is a very bad person though, this one moment was good.

This podcast has resurfaced after the recent Gabbie Hanna-Jessi Smiles feud.

When top viners offered their help to save Vine, the offer was to get each of the top 21 viners a million-dollar contract, where the viners would get monthly payments of $100,000. Alx James was on the list, however; there was no sign of Gabbie Hanna. So, at that time, Alx asked to include her name as he wanted “his friend” to be on the list as well and get the benefits. The deal never went through though. However, Alx says he always wished her well. 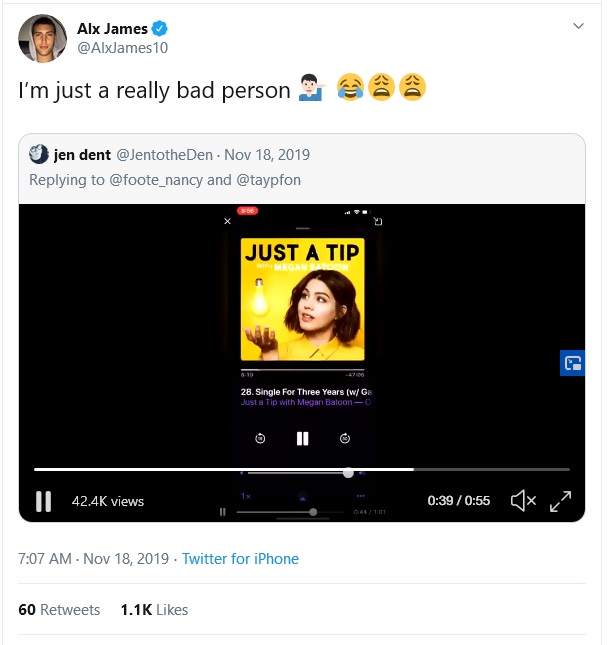 Related: Alx James calls out Gabbie Hanna for “overdramatizing” everything

Explaining how rude she used to be, Alx said he always had his friends over at his place. And one day Gabbie comes over, sees his friends, and says: ‘are you running an orphanage?’ Alx James wants Gabbie Hanna to acknowledge what she has always been doing to others. He also highlights her song monster saying the lyrics, probably, were about herself: what if I’m a monster that’s been here all along.

At the end of the video, Alx wants Gabbie to seek help, medication, and start therapy. And she should stop defacing people. He believes their friendship was a calculated move and for just her own benefits. He also thinks that she is sabotaging herself with her behavior.

Gabbie Hanna has not responded to Alx James’s video yet.