Trust Bojack Horseman to always put you in the feels. Or sometimes hit you hard right in the gut. Or other times when you watch a scene and instantly feel tears welling up in your eyes. The show with its satirical, comical vibes is, in fact, one of the saddest television series. If you’re a Bojack Horseman fan you know you need a tissue box nearby.

Bojack Horseman fan or not, we have compiled the most depressing yet emotional quotes from the show, that will surely make you feel something. These are the same scenes we love this show for. Because the writers constantly teach you something profound about the journey called life.

This quote depicts Bojack Horsman in its entirety. It summarizes ‘clinical depression’ as well. Bojack is clearly and extremely depressed. He has been inherently sad, broken, damaged and unhappy since he was born.

The words he says here, to his half-sister, Hollyhock are quite simple. But every time you read or hear them, they hit you hard. The writer has simplified a complicated, dangerous mental illness and explained its severity with these words.

Depression is never-ending pain. And someone else simply cannot understand it.

“You’re a real stupid piece of shit.” – Bojack Horseman to Himself

Season 4, Episode 6 called  ‘Stupid Piece of Shit’ 4 starts with a voice-over of Bojack Horseman telling us his inner thoughts right when he wakes up to start his day.

Bojack Horseman nails at depicting what it’s like to hate yourself. The self-hatred that depression brings is expressed ‘brutally and honestly’- something the show has become famous for.

Interestingly, it even shows how even the most depressed person tries to find a silver lining. Bojack wants to feel better about “being a piece of shit” so he says, “But I know I’m a piece of shit.. That at least makes me better than all the pieces of shit that don’t know they’re pieces of shit. Or is it worse?”

And that, just makes it even sadder.

Diane Nguyen is a character who suffers from chronic existential crisis and depression. She has a worldview that is different from anyone else’s on the show. In fact, she shows that right here after she has a seemingly perfect wedding with Mr. Peanut Butter.

Well, this saying is actually genius. All our life we wait and pine for that one thing; a person, a job, a destination that we like to call “our happy ever after” but that’s not the end of life. It’s actually a new beginning in itself. And how can everything be perfect after that? Perfection does not exist.

Diane critically analyses the concept of a happy ending and makes us look at it with an all-new sad yet realistic perspective.

Sara Lynn is yet another character from the show who shook us with her ruthless representation of mental illness. This scene has a lot of depth to it because the character literally goes into a whirlwind of depression that has a very sad end. (no spoilers!)

And this scene tells us what that road feels like. It tells us that mental illnesses are invisible when she says “I know I’m smiling right now” and that they suck the life out of you while no one even notices, “But the light inside me is dying.“

We just got gut-punched, again.

‘It’s so sad that when you see someone as they really are, it ruins them”- Bojack Horseman 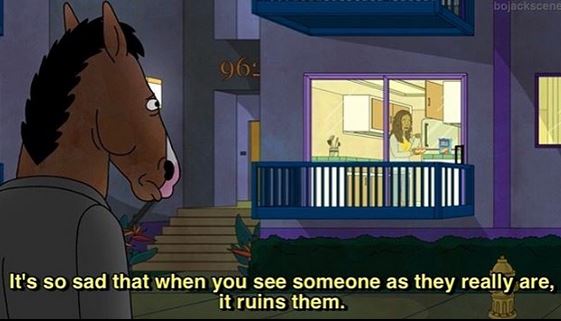 This quote is about truly loving someone, or, a ‘fantasy’ of them. When you idealize someone a lot, you see them as the best person. In your imagination, they are almost perfect. But when you find out their reality, it ruins them.  That picture of someone flawless is destroyed. And it hurts to see the ruins.

Ed volunteers to fix Bojack’s old house. For some reason, Ed does not wish to fly. He tells Bojack he hasn’t flown since his wife, Lorraine died. In an emotional turn of events, Ed grabs Bojack soars up the sky telling him about the night of her death. When they fall back down, they land in deep water. Ed is seen drowning, when Bojack pulls him out of the water, saving him. Bojack slaps him into consciousness to which Ed wakes up and starts to cry.

This scene makes us cry, every single time for the sheer sadness and unwillingness to live that Ed had inside him.

“Everybody loves you, but no one likes you” 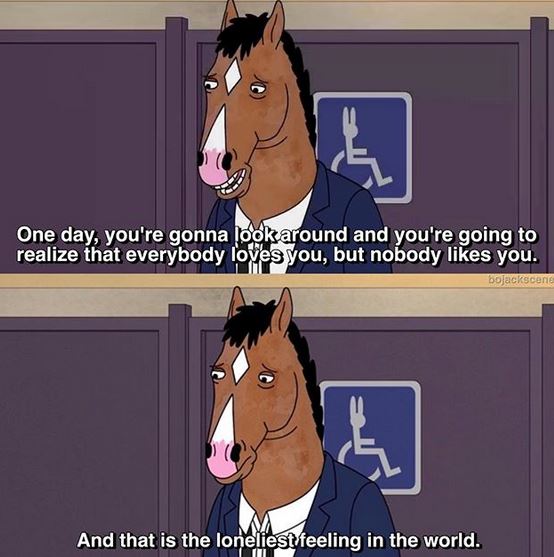 Even in the height of fame and stardom, loneliness is a shadow that lingers around. Bojack Horseman aces at describing that feeling.

Bojack talks about being loved, but not liked. And that there is a difference between the two. Getting loved by the world, your fans or even your friends or family is easy. It’s easy to make people love you. But the same people who love you, don’t always like you. They don’t simply respect you or appreciate the person you actually are.

It’s important to understand the difference in being loved and not liked by others. According to Bojack Horseman, “it’s the loneliest feeling in the world”. A reality check for sure.

“I’m punishing you for being alive”

Not everyone has a healthy childhood or loving parents. Bojack Horseman is a classic example of a neglected child who was constantly abused since he was very young.

His mother, another damaged person was also a by-product of a tough childhood where she was taught to never to love another person. Here, Bojack’s mother tells him after he gets caught smoking that she’s not punishing him for his actions. In fact, she is punishing him for being alive.

This scene is sad because it unveils the trauma that parents inflict on a child by being cold and unloving. Unwanted children suffer the most, and this is why Bojack is the way he is now.

“You were born broken, that’s your birthright. You’re Bojack Horseman. There’s no cure for that.”

After all those years, Bojack Horseman lands himself a huge role in the upcoming movie. ‘Secretariat’ when he calls his mother. She reiterates what she had made him feel his entire life; that he’s broken.

To hear from your birth-giver, that you were born broken? This is one of the saddest scenes of the show because it is about hopelessness. “There is no cure for that” Bojack hears his mother say. And yet again, in the midst of new and positive things happening, he finds himself depressed again, unable to see the light at the end of the tunnel.

Those were our top depressing quotes from this amazing show. As heartbreaking as it is, the show is a true glimpse into issues people get scared to talk about. In fact, it has become a voice for the mentally ill, the neglected, the abused, and the ones who feel damaged. And that is why we love the writers of Bojack Horseman.