Things are not looking good O_O

Okay wow, Gabbie Hanna literally wanted to start a drama a couple of weeks back. And she is just proving she is not done yet. We are not really against her or picking sides, however; the piling receipts are not looking good. After a week of drama with Trisha Paytas and Gabi DeMartino from the Blood Queens, Gabbie is in another drama involving her ex-BFF Jessi Smiles. Now, people were not really expecting it at this time when Gabbie was enjoying her latest release-Broken Girls. However, it is sad but true, Gabbie Hanna is having a public beef with Jessi Smiles after the latter exposed the former in her video. Why Jessi was forced to expose Gabbie and what was Gabbie’s response in return? Let’s find out.

Gabbie Hanna and Jessi Smiles used to best friends back in the days. However, they had a falling out due to some unexpected events. In her video, Jessi said she will not cover all the details that led to their friendship breakup. However, from that indefinite list of events, Jessi shared the most relevant reasons to her latest YouTube video: “Gabbie Hanna needs to be stopped”.

Jessi confirmed she is not really a huge fan of Trisha Paytas and just considers her a troll as she always has issues with everyone. However, Trisha’s video on Gabbie Hanna really stirred the demons from Jessi Smiles’ past. Following Trisha’s video, Jessi posted a cryptic tweet which she deleted later. However, she confirms it was petty and dumb by her to post something cryptic instead of diving straight into it. Jessi Smiles’ deleted post said:

If you’re a shitty person, the world will find out. Maybe tomorrow, maybe the next day. But it’s only a matter of time.

If you do not know this, back in 2013 Jessi Smiles sued her then-boyfriend and a famous Viner, Curtis Lepore, for sexual assault. In fact, Gabbie Hanna and Jessi Smiles had a falling out because Gabbie chose to support Lepore in her very own cryptic way.

A day back, Gabbie Hanna sent a DM to “deanime” (twitter account of Deanna, a fan) who brought up the Jessi-Curtis issue in a comment. However, later Deanna realized she is being manipulated by Gabbie Hanna. Therefore, she sent the whole conversation to Jessi Smiles and gave her consent to use these messages in Jessi’s video.

Long story short, Gabbie Hanna wanted to see receipts, pictures or any proof that she supported Curtis Lepore. Gabbie claims she never collaborated or contacted with Curtis, and it is all a rumor. She only tweeted at him once and that was before she met Jessi Smiles. Gabbie even told Deanna that Curtis contacted her when he heard about what happened between Gabbie Hanna & Jessi Smiles. And he apologized to Gabbie for his past behavior with her (read: Gabbie). And Gabbie text claims she replied with thanks but that she will never side with him or bash Jessi.

(3) Jessi Smiles Confirms: That Was A Manipulative Lie

Gabbie Hanna, in real, met Curtis on one of Curtis’s friends’ party where he talked to her one-on-one and said all those things in person. Jessi tears up sharing these details because Gabbie was lying about her interaction with Curtis. And Jessi knows the truth because Gabbie, herself, told her the truth back then.

At that time, Jessi argued with Gabbie on why would she hang out with a rapist and his friends. And Gabbie kept defending herself saying that she was at a party with Curtis’ friend and that Curtis just happened to be there. Jessi just could not imagine how can someone party with a rapist or rapist’s friends. But what Gabbie said next, was truly unbelievable. That statement by her still hurts Jessi Smiles. Gabbie said:

Jessi Smiles shed some more light on the differences between Gabbie Hanna and Jessi, herself. She shared video clips from a couple of years back when both of them were making videos on each other without using names. Gabbie called Jessi a “Crazy bitch” and “Psychotic”. And she said she only spends time with psychotic people because she wants to “fix them”.

On the contrary, Jessi Smiles did not use any bad word or harsh word against her. That’s a huge difference. Moreover, Jessi texted Gabbie a few months back and the video shows that message. Summary: it was Jessi asking Gabbie to cook some vegan food for her, and Gabbie asking Jessi for rental apartments. Apparently, those messages look fine. But Gabbie used those messages to talk “s***” about Jessi with Deanna.

Fans have been really losing their nerves now. First, it happened with Trisha Paytas when Gabbie Hanna defended the spreading of her STI rumor with the fact that Jason Nash was Gabbie’s friend. And yeah, she was just looking after her friend. Okay, but now this is the second time something is happening and the fans are losing it in the comments section of YouTube video.

This time, she used Jessi Smiles’ medications as an excuse. Jessi was using anti-depressants five years back when she was dealing with her trauma. And she confided in Gabbie because Gabbie always talks about helping people.

After realizing that Deanna cannot prove what she saw and probably it was a false memory, she apologized to Gabbie Hanna and wanted to know if she should make a public apology statement as well. In response, Gabbie said: 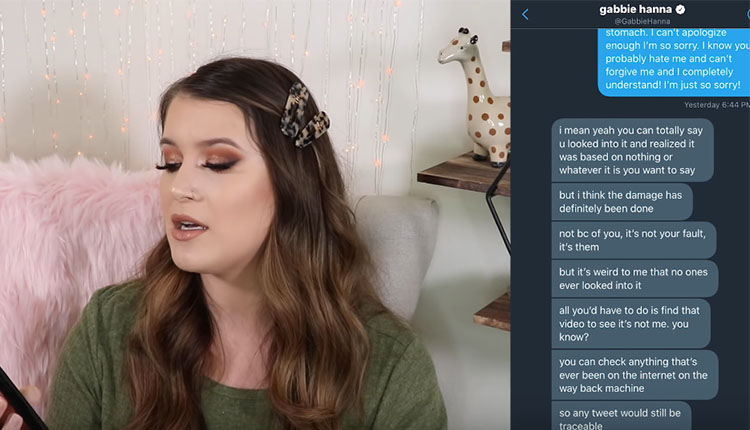 Deanna apologized to Gabbie again and Gabbie responded with a heart. It was supposed to be the end of the discussion, however; an hour and a few minutes later, Gabbie Hanna decided to send texts to Deanna again.

Basically, Jessi Smiles edits videos for creators as a second job. There was a time when she was just focussing on the editing only. Jessi has a kid and she was unable to make her own videos. So, she decided to contact different influencers and asked them if they wanted her to edit videos for them. Gabbie Hanna was one of them. Gabbie told Deanna that this girl (read: Jessi), who was asking Gabbie for a job some time back, is ruining her career now.

In the end, Jessi Smiles shared a statement from “deanime_” , the fan who was manipulated by Gabbie: 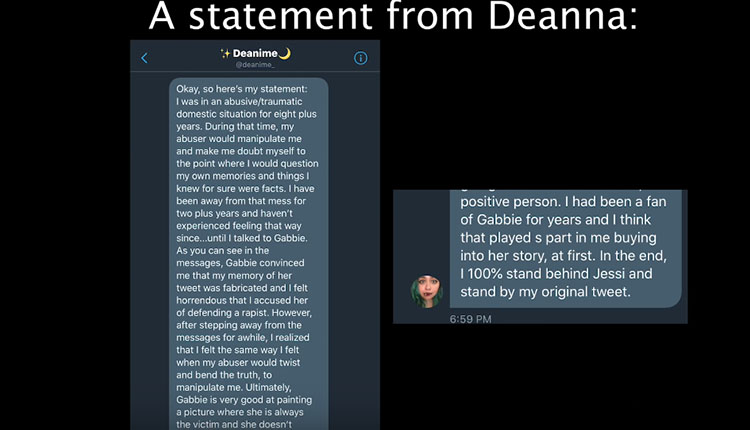 Gabbie Hanna has responded to Jessi Smiles. The story is covered in the next part.

BoJack Horseman | Depressing Quotes That Hit You Where It Hurts