There are two kinds of XO fans in the world. The first kind, who has been patiently waiting for The Weeknd new album to drop soon. And, the other one, who is done waiting, and impatience is killing them. However, the damn album is still not out yet. Even though he has been working hard on this album, there are still no signs of it to drop any sooner. The Weeknd, real name Abel Tesfaye, has released some collaborations during this waiting period. In fact, one of the greatest hits this year is his collaboration for Game of Thrones soundtrack Power is Power.

The Weeknd collaborated with Travis Scott and SZA, and that song gave temporary relief to many of XO fans. When the demand for the album started to get on his nerves, he deleted his Instagram account. However, the pressure is still there as The Weeknd just deleted his latest tweet. And we are wondering why.

His latest tweet was very simple and kind of sad, to be honest. The Weeknd has been a very busy man. His latest movie Uncut Gems with Adam Sandler is about to release on December 13, 2019. Moreover, the breakup with Bella Hadid has been unexpected as well. The cherry on the top, he has to complete the album soon as XO fans are anxiously waiting for it. So, it is understandable when The Weeknd posted this now-deleted tweet.

get me out of this house.

Now, either the pressure of album completion is driving him crazy. Or, he wants to just go out and enjoy Halloween but he needs some motivation to do so. Whatever the case is, deleting this simple tweet has an unknown reason behind it.

Related: The Weeknd Hints Album Release In His Latest Tweet?

Though the tweet is not available anymore. However, an XO fan has posted it on The Weeknd deleted posts’ thread on Reddit. It proves, that the tweet was really there and I am not becoming paranoid in hopes of getting the album update. For a moment I thought I am dreaming and the tweet was just a hallucination. 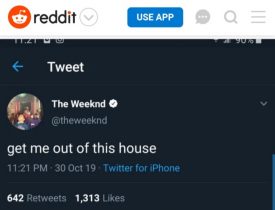 Let’s keep our fingers crossed and hope we finally get the album soon, and that this tweet deletion was a sign, of some sort.

Related: The Weeknd Drops 2 Tweets In One Day | XO Fans Hope The Album Is Coming!
Abel TesfayeThe Weeknd
0 3,444
Share
Subscribe to our newsletter
Sign up here to get the latest news, updates and special offers delivered directly to your inbox.
You can unsubscribe at any time

Ian Somerhalder’s V Wars Is Coming To Netflix In December